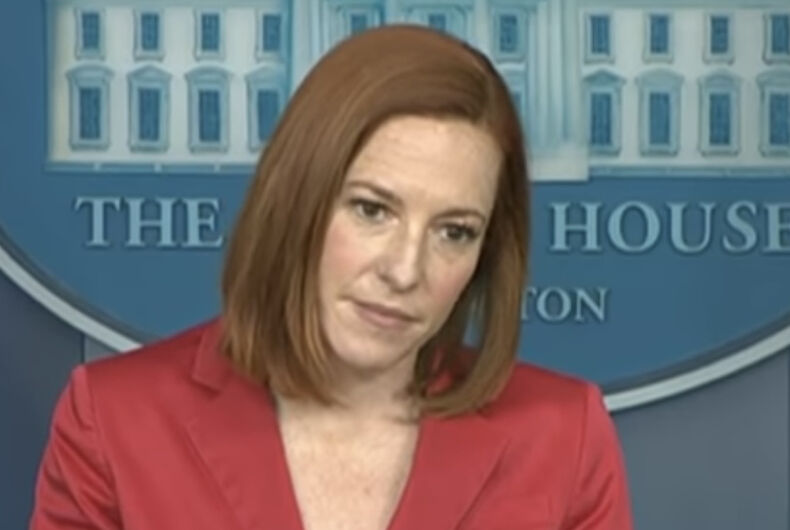 The rightwing reporter had attempted to goad Psaki into condemning an athlete who protested during the Olympic trials by turning her back on the flag during the national anthem.

“This weekend Gwen Barry, who represents the United States as an Olympian on the hammer-throwing events, won a bronze medal at the trials, and then she turned her back on the flag while the anthem played,” Doocy said.

“Does President Biden think that is appropriate behavior for someone who hopes to represent Team USA?” Doocy asked.

“I haven’t spoken to the President specifically about this,” Psaki began, “but I know he’s incredibly proud to be an American, and has great respect for the anthem, and all that it represents especially for our men and women serving in uniform all around the world.”

“He would also say of course that part of that pride in our country means recognizing there are moments where we are as a country haven’t lived up to our highest ideals, and it means respecting the right of people, granted to them in the constitution to peacefully protest.”

After the 2019 Pan-American Games, Berry was reprimanded by the International Olympic Committee after she raised her fist at the end of the Star Spangled Banner to protest racial injustice in America. Berry won a gold medal.

She was forbidden from protesting for a year and put on probation for a year. The U.S. Olympic and Paralympic Committee, however, issued new guidelines to allow peaceful protests “in support of racial or social justice for all human beings.”

The right to protest the government is one of the founding principles of American democracy.

Doocy is such a douche. He loves getting schooled by Psaki!

Psaki on Biden's response to an athlete turning her back on the flag: "He's incredibly proud to be an American … part of that pride in our country means recognizing there are moments where we as a country haven't lived up to our highest ideals." pic.twitter.com/YMOVAeYu29

Doocy keeps lobbing this stuff Psaki's way and she just lobs them back, schooling him as she goes.

Once again, Jen Psaki made Peter Doocy look like a fool and and idiot. When he will realize that he is no match for Psaki?