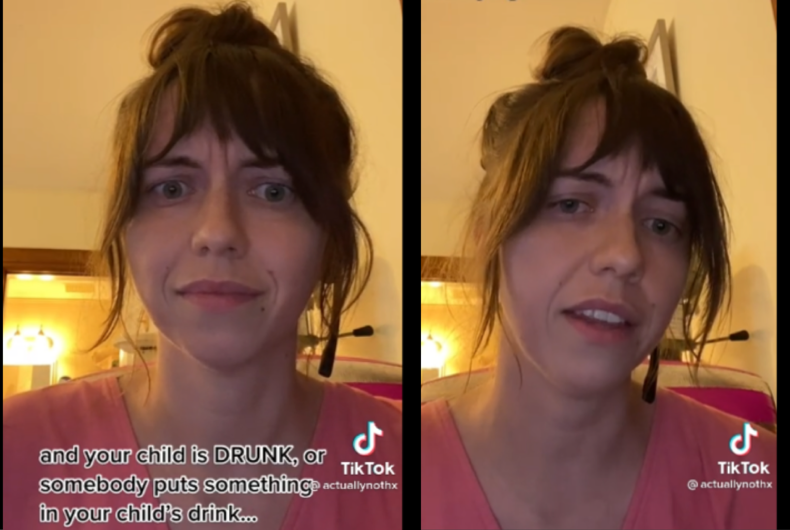 Hannah, known as TikTok user @actuallynothx, takes the bizarre call from a customer complaining about their drunk children and Pride.Photo: Screenshot/TikTok

As usual, despite the progress made year after year, there are still people that get upset at any acceptance of LGBTQ people or any recognition of Pride Month. Even as it continues to become clearer that there’s no reason for those people to object, other than to show they don’t like some people for who they are.

A complaining customer calling into a business’s customer service department reminded us of that.

The customer made a call simply to complain about the fact that the business had celebrated Pride Month.

A few TikToks by @acutallynothx, known as Hannah, the customer service representative that took the call, shared parts of the “conversation.”

Hannah shared one video that went viral with the caption, “This lady was mad that the company I work for posted about #pridemonth🏳️‍🌈 on social media.”

It appears the unnamed customer is more interested in just yelling at a representative — who likely doesn’t have a say in marketing or philanthropic causes of the company — than actually trying to “resolve” their issue.

Hannah then says, “If you’re going to keep yelling, and you don’t wanna have a back-and-forth discussion, I’m just going to hang up.” The customer keeps trying to talk over Hannah.

The customer then brings up an apparently hypothetical situation about someone daring her child, and then immediately suggests that her child gets drunk and has been drugged by someone putting something in their drink.

Confused, Hannah responds, “Well, ma’am, people putting stuff in your children’s drink has nothing to do with Pride Month.”

Yet the customer tries to explain further, saying that “Hollywood” is attempting to “glorify this culture,” referring to LGBTQ people. She then says that the company Hannah works for “is wrong to glorify this culture” and that she was “so offended.”

Hannah informs her, “People all around the world… have been glorifying straight culture for hundreds and hundreds of years.”

The customer doesn’t seem to actually listen to her, instead continuing to yell about how “wrong” showing Pride is and claiming people are “forcing this culture” on children.

Hannah then reminds her once again that “If you would rather yell at me than have a conversation,” she would hang up.

Still not seeming to pay what Hannah’s saying any mind, the customer yells, “You are a disgusting human being!”

“Okay, well I think you’re disgusting,” Hannah claps back. “Bye!” and the video ends as she’s about to hang up.

The video became an instant hit on TikTok, garnering over 140,000 likes in just a matter of days. It was so popular, Hannah felt inclined to share more of the conversation.

In “Part 2,” which seems to be earlier in the “conversation” from the initial video, Hannah is heard trying to explain why the company would show Pride.

“The reason you’re seeing quite a bit… is because it’s Pride Month, and the visibility and openness is kind of what it’s all about.”

“Still,” the customer says before continuing her tirade, “I am disgusted with this society.”

She again brings up her own children and says she can’t control them and what they see or post online, “But at least I’m not seeing it. Do you understand what I’m trying to say?”

Hannah, understanding clearly what the customer is saying, shoots back, “When you talk about children seeing it, it’s not… inappropriate content.”

Hannah asks, “Why do you think it’s inappropriate?”

After stuttering for a moment, the customer admits what was clear along — it’s not inappropriate or wrong, she just doesn’t like seeing people celebrate their identity. “It’s approving that lifestyle, and that lifestyle is wrong,” she claimed.

Instead of leaving the issue there, the customer continues to try to get the company to center their business decisions around her personal feelings.

She then brings up high rates of suicide among LGBTQ youth, claiming that that’s happening because of the “exposing” of LGBTQ people in media.

“Actually, most of those youths are committing suicide due to a lack of acceptance,” Hannah quickly clarifies.

“No,” the customer tries to rebut.

Thousands of commenters between the videos cheered on Hannah for sticking up for LGBTQ people while still doing her job, and not letting a customer continuously berate her.

She also managed not to give her company’s name out by censoring a part of the video with her own, self-produced horn tooting sound.

She’s done a number of other TikTok videos when she is (or supposed to be) working.

In another video of hers, for example, she questions whether she would “swipe right” on her friends if they were a male prospective date on the app Tinder.