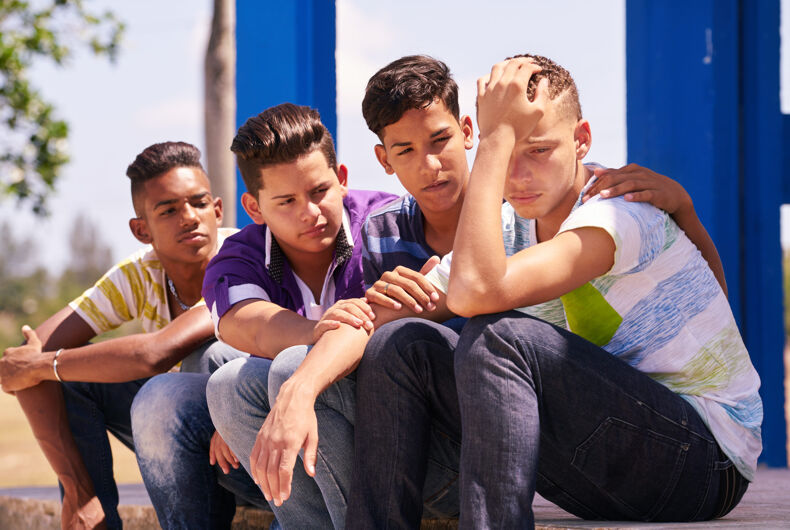 The Trevor Project’s latest National Survey on LGBTQ Youth Mental Health found some troubling results: nearly half of the youth they surveyed considered taking their own lives in the last year. More than half of transgender and nonbinary youth considered doing so as well.

That is undoubtedly due in part, to the record number of anti-LGBTQ legislation being considered or enacted across the country. More than 9 out of 10 youth surveyed cited recent politics as something that negatively affected their mental health.

Related: Almost a quarter of all workers say they know LGBTQ employees are treated unfairly

“You can see this as wave upon wave, just building and building, until for a lot of LGBTQ youth it just feels like it’s too much,” Sam Brinton, the vice president of Advocacy and Government Affairs at the Trevor Project, told The Hill in revealing the results this month.

The survey is the third annual collection of mental health data for thousands of LGBTQ youth by the Trevor Project. They received responses from nearly 35,000 LGBTQ youth, ranged from ages 13 to 24, across the United States. They found their “most diverse” survey pool yet, reporting that 45 percent of respondents were LGBTQ youth of color, while 38 percent being transgender or nonbinary.

The survey found in one of its most vital — and painful — statistics is that 42 percent of the respondents revealed they had seriously contemplated suicide in the year before the survey. That’s a slight increase from the finding of 40 percent in 2020, and from 39 percent in 2019.

As if that’s not alarming enough, 75 percent of respondents confirmed that “they had experienced discrimination based on their sexual orientation or gender identity at least once in their lifetime.”

For LGBTQ youth of color, half said that they were discriminated against based on their race or ethnicity within the last year. 67 percent of Black LGBTQ youth and 60 percent of Asian/Pacific Islander LGBTQ youth reported they experienced racist discriminatory treatment.

The COVID-19 pandemic undoubtedly had a drastic effect on LGBTQ youth, many who lost access to safe spaces and freedom of expression that they have at school, educational programs, and LGBTQ centers.

While it is banned in several places across the United States and shown to be a false “treatment” of LGBTQ people, 13 percent reported that they were still subjected to conversion therapy in the last year. 83 percent of those respondents were under the age of 18 when it happened to them.

All the info is not negative, however — LGBTQ youth reported that their consideration of suicide drastically changed when their identities were respected, whether with the correct use of pronouns or consideration of the LGBTQ youth’s name, legal documents, and birth certificates.

Similarly, respondents overwhelmingly agreed that social media has both a positive and negative effect on their mental health.

“To all the lawmakers considering anti-transgender bills across the [country] — we urge you to take a hard look at this evidence and take time out of your day to actually meet with the transgender and nonbinary youth who would be harmed by your misguided proposals,” the CEO and Executive Director of the Trevor Project, Amit Paley, said about the survey’s finding.

“Affirming a young person in their gender identity is strongly associated with lower suicide risk. That’s why we should be expanding systems of support and implementing more inclusive policies, not denying trans youth access to affirming spaces and care,” he added.

Brinton, in a plea for allies to take action, said “It is exhausting to consistently be having to talk about your rights being voted on by others and so sometimes creating that moment of, ‘I’m here to listen if that’s what you want to talk about, but we can also just talk about how hard algebra was today,’ can make the difference.”

If you or someone you know needs help or someone to talk to, know that the Trevor Project is here 24/7, and can be reached by phone at 1-866-488-7386 or text and chat at www.thetrevorproject.org/get-help-now. You can also contact the Crisis Text Line by texting TALK to 74174 or call the National Suicide Prevention Lifeline at 1-800-273-TALK (8255).