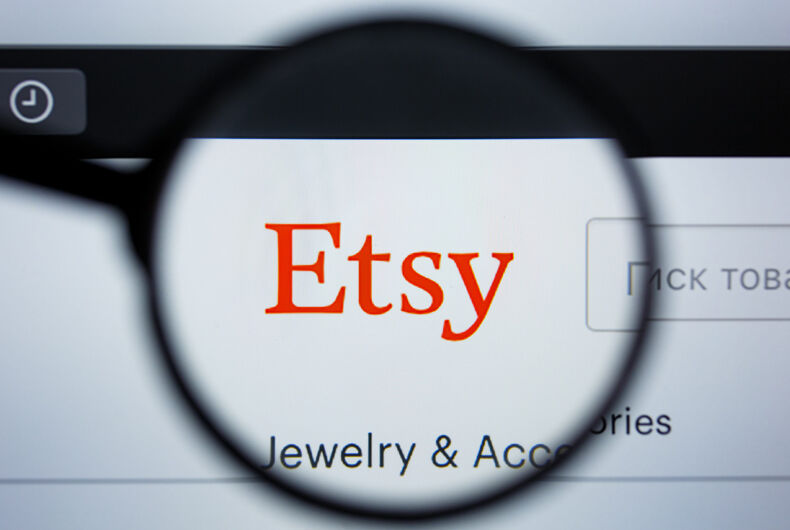 One Million Moms, the evangelical astroturf group funded by a hate group, often tries to claim “successes” over mega corporations they complain about for being supposedly not-family friendly.

Now, though, rather than go after LEGOs and Kellogg’s, two corporations who have already gotten backlash over their Pride merchandise, One Million Moms is trying to forge new ground. They’re focused on attacking Etsy, claiming the arts & craft marketplace website is “no longer a family-friendly website” because it allows people to sell “graphic nude photos and sex toys including sex dolls.”

Related: Evangelicals hope to cancel “Blue’s Clues” next for recognizing the letter “P”

One Million Moms is known to only have one full time employee, director Monica Cole, and is solely operated by her and the American Family Association, a certified anti-LGBTQ hate group. The group is known for trying to boycott different corporations who include any LGBTQ representation in their ads or products.

“Some consumers may be shocked to find out Etsy.com is no longer a family-friendly website. Etsy is selling graphic nude photos and sex toys including sex dolls,” Cole claimed in her latest update, sent via email to subscribers and posted to the One Million Moms website.

While Etsy, which allows users to market and sell different handmade products, has always had allowed explicit content on a restricted basis, Cole claims that the website has just now “become an adult themed store by including everything a fantasy store would sell.” She makes it seem that they made “this decision to become an online sex store” for unexplained reasons.

“The site doesn’t ask for age verification before viewing nude photos, and very few are pixelated or blurred for discretion,” she wrote. “Our concern is that someone may stumble upon the images at any time, but especially in the coming weeks while searching for Father’s Day gifts.”

Cole didn’t list any specific examples of supposed sex toys or dolls available on the website, or people who are selling them. She just derides the company for being “full of third-party pornography.” She pushes her followers to stop using the website because it has “full nudity pictures, pinups, and posters of both heterosexual and homosexual partners engaging in sex.”

The One Million Moms website houses a petition calling on Etsy to “return to the company’s roots and original policies of not selling third party items unless vintage.” Most people selling products on Etsy are not actually employed by the website and are all “third party,” just like they would be on sites like Amazon or eBay.

Etsy has not issued a response to Cole’s complaints.