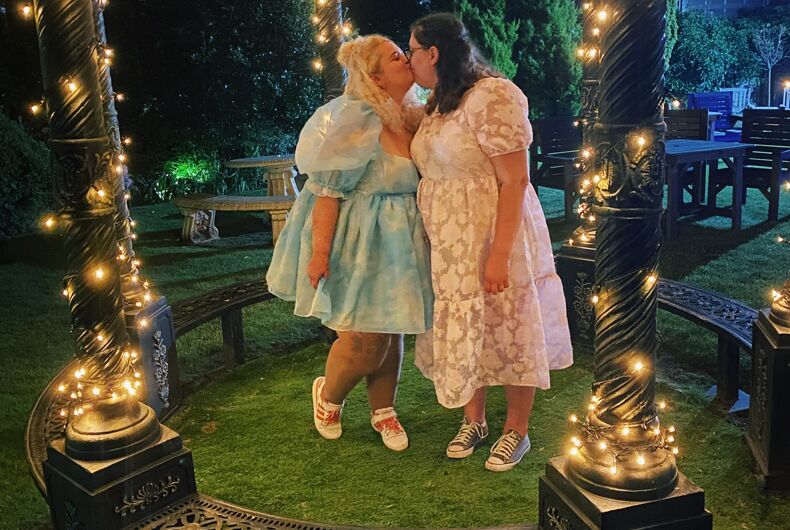 Not even a global pandemic can stand in the way of queer romance, as 2021 was a year of love stories like no other.

Check out these adorable tales of queer love from the past 12 months.

Libby met Molly on Twitter, admitting they were skeptical at first as to whether meeting your one true love on a dating app was possible.

Libby was also really struggling with their mental health at the time, so ended up deleting the app and going off the grid for a month. They eventually decided to redownload Tinder, explaining to Molly where they had been – and luckily she messaged back.

Ever since then, there hasn’t been a day where the two haven’t spoken.

“It was difficult at first because while we only live an hour’s train ride apart, COVID meant we couldn’t see each other. So, our first few dates were over FaceTime. I didn’t mind, though, because I was falling so madly, deeply in love that I knew it would be worth the wait meeting her – and it truly was,” Libby shared.

The two of them have both been through so much in their lives, and Libby admits there are times when they trigger each other’s trauma. But, as time has gone on, they’ve learned to communicate better and support each other when that happens.

“I have been in two abusive relationships in the past and never quite felt able to fully trust someone. But with Molly, I knew I could trust her from the start. Nobody had ever made me feel as safe as she did. I could be completely exposed and vulnerable with her and know that I was ok. That nothing was going to hurt me. That I could trust she would catch me if I fell.”

Libby says that being with Molly has helped them understand what it truly feels like to be in love and to be loved by someone else in a healthy relationship.

It’s even the simple things, like the time Libby mentioned they were craving Ferrero Rochers and Molly bought them some on her way home from work the next day. Libby was shocked and couldn’t understand what they had done to deserve such a kind gesture.

“I was worried she had bought them to apologize about something, but she had just bought them because I wanted them and it was so thoughtful that I almost cried. She treats me like I deserve love and kindness and I have never felt such joy, admiration and pure love for someone,” they shared.

Molly holds half of Libby’s heart, and she truly feels like home for them.

Jay matched with his boyfriend on Tinder and, admittedly, felt intimidated at first, thinking he didn’t have a chance when they met IRL.

It took a while for him to build up the courage to send that first message, but after eventually reaching out, they would stay up chatting until the early hours. After exchanging numbers, they texted until 5am.

The pair lived two hours apart and lockdown meant they weren’t able to visit one another, so started with a FaceTime date. Jay was super nervous, but came out of his shell soon enough. Before they knew what was happening, it was the AM and they practically fell asleep together. This continued, as late night texting sessions turned into FaceTime dates and virtual movie nights where they’d put on the same movie and watch along together while chilling.

This continued for four months until pandemic restrictions permitted them to meet for the first time.

“His parents knew about me at this point. I had spoken to them on FaceTime and they were ok with me coming to their house. I booked the earliest train I could and the latest one home so we could spend as much time together as possible, which involved a train at 7am. I nearly didn’t even get off because I was panicking and felt sick with both excitement and fear. This was our first time seeing each other and even though we’d been acting like we were together, we still weren’t official, so it was a big deal, and I was worried he wouldn’t like me in person,” Jay shared.

“But when I got off the train, he hugged me and, just like the first call we had, I didn’t know what to say. My mind went completely blank. He was just as attractive and cute in person. When we got back to his place, we put a movie on but spent most of the time talking and holding hands.”

He asked Jay to be his boyfriend, to which he happily said yes, and they proceeded to spend as much time together as they could, even if it meant traveling after work to spend a night, it was absolutely worth it for them.

Jay now says their relationship makes his life feel like a cheesy romance movie. They’ve spent weekends away in hotels, visited museums, restaurants, and Jay knew the second he saw him, although this is his first boyfriend, he was different to every other boy he’s known.

“He is kind, funny, sweet, he listens to me, he knows me better than I know myself 99% of the time. He ignited and helped me find parts of myself that I had lost a long time ago. He always encourages me to be the best version of myself, gives me tough love when I need it, and loves me for who I am with no questions asked,” he shared.

In autumn they made the decision to move in together while saving up to get their own place.

While some may agree they’re moving at a fast pace, they fall more in love every day. Jay wouldn’t change a single thing about their relationship, and wants to continue living like life is a romance movie.

He was on his way home from a job interview when he opened Grindr. Jordan saw Nicholas was in his area, so they began chatting. Nicholas never thought they’d actually meet in person because of how far away they lived from one another, but fate brought them together.

After FaceTime dates, they started dating properly, before they moved closer together and the couple are now engaged.

“What makes our relationship special is that we love each other so much, but we’re also like best friends. We always have a laugh, and nothing is one-sided. We both really appreciate each other, and I genuinely can’t envisage spending my life without him,” gushed Nicholas.

“Another thing I love about our relationship is that there’s no judgment. As someone with autism, OCD, anxiety disorder and other disabilities, I struggled to find someone who could truly understand and accept me. But, Jordan has always been very supportive and never judged me, even on my worst days. He does so much for me. If I’m feeling down or worried about anything, he’ll always listen and make me feel better. He’s one of a kind.”

Nicholas says the pandemic has only strengthened their relationship and made him more grateful for having Jordan in his life. Just like many other people, he experienced mental highs and lows during lockdown, and had to give up full-time work to focus on improving his health after experiencing a mental breakdown. He says the only thing that has kept him alive is having Jordan by his side.

“I love everything about Jordan, but if I had to choose specific qualities, I’d say caring, kind, empathetic, sweet, hard-working and so much more. I also love his beautiful smile and blue eyes. He’d genuinely do anything for me, and I can’t fault him.”

In terms of what Jordan loves about Nicholas, he describes him as funny, loving, romantic and generous. But Jordan also said he loves everything about Nicholas, which makes Nicholas smile.

“I find it hard to believe these things, as I doubt myself so much. However, Jordan always finds a way to make these thoughts disappear from my head and make me feel one of a kind.”