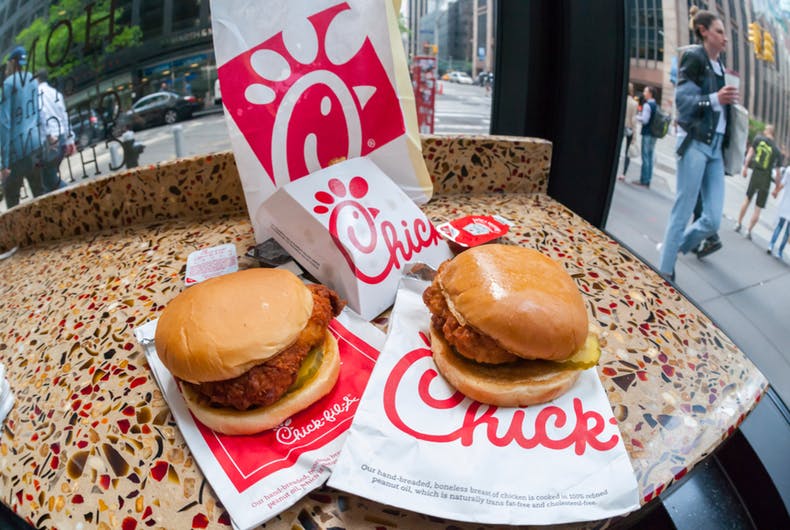 Christian millionaires – including Dan Cathy, an heir to the Chick-fil-A fortune – are behind one of “the most sophisticated dark money operations” ever seen to pass anti-LGBTQ legislation and stop the Equality Act.

Chick-fil-A has been assuring customers for nearly a decade that it has stopped donating to anti-LGBTQ causes, only to be caught doing so time and again. Now the fast food chain’s billionaire co-owner is using the company’s profits to fund hate groups that are passing anti-transgender bills all over the country and a campaign to stop the Equality Act from becoming law.

A new report from The Daily Beast exposes the operation being run through the National Christian Charitable Foundation (NCF), the sixth largest charity in the U.S. The group’s donors include some of the wealthiest social conservatives in the country, like Chick-fil-A CEO and chairman Dan Cathy, former Secretary of Education Betsy DeVos’s family foundation, Hobby Lobby, and the Anschutz family.

The report comes as the Equality Act stalls in the Senate. The Equality Act would add sexual orientation and gender identity to existing federal civil rights legislation. It polls well – 70% of voters said they supported it in a poll this past March – but it’s still far from getting close to the 60 votes necessary in the Senate to pass.

That the bill hasn’t passed after being introduced in Congress in some form for decades has been something of a mystery. Sources in the Capitol said in April that Sen. Joe Manchin (D-WV), who has not come out in support of the bill, has been subjected to a massive call-in campaign organized by Christian groups and that the calls have been “a thousand to one” against the Equality Act.

Meanwhile, dozens of states are considering and passing legislation to limit LGBTQ – and particularly transgender – rights, legislation that lawmakers often don’t really understand or can’t explain how it relates to their state. Alliance Defending Freedom (ADF), an SPLC designated hate group, is believed to be behind this effort.

ADF is also responsible for this year’s spate lawsuits targeting anti-discrimination legislation, filing on behalf of Christian business owners who haven’t even been asked to serve LGBTQ customers but claiming that their religious freedom is impeded by the mere existence of civil rights laws.

The group has given grants to 63,000 non-profits since it was founded decades ago, including Heritage Foundation, one of the biggest groups trying to stop the Equality Act from passing.

NCF is a donor-advised fund, which means that donors can suggest how the money is used, although they are legally not allowed to tell the organization what to do with their donations.

“They certainly sell it to donors as, we do what you want with this money,” said a tax analyst familiar with NCF’s filings.

NCF co-founder Terry Parker is the director or the treasurer of several organizations with names like “Christian Heritage Foundation of Steamboat Springs,” which the analyst said are funding things including “advocating for the forced sterilization of transgender people” in Europe.

“That’s the super-dark money element, versus that kind of standard run-of-the-mill dark money,” the analyst told The Daily Beast. “They’re doing hardcore extreme stuff, but they make it seem like it’s a bunch of soup kitchens.”

In 2012, the Chick-fil-A Foundation was caught donating to anti-LGBTQ organizations that opposed marriage equality and promoted conversion therapy.

Cathy said that the company was “guilty as charged” because they want to promote “the biblical definition of the family unit.” Chick-fil-A later walked back that support and said that they would stop funding organizations with “political agendas.”

In 2014, Chick-fil-A founder S. Truett Cathy died and left his company to his sons Dan and Bubba. Today, Dan Cathy has an estimated net worth of over $8 billion from selling chicken sandwiches, and the Cathy family is believed to be the 15th wealthiest family dynasty in the U.S.

In 2019, the Chick-fil-A Foundation was caught once again donating to anti-LGBTQ groups and promised to stop, eliciting jeers from Evangelical leaders. Later that year, their 2018 IRS filings were made public and showed more donations to anti-LGBTQ groups, but the company said that those were just old commitments.

Now it seems like Cathy’s strategy is to use the vast funds he has acquired – and continues to receive – from Chick-fil-A to engage in more aggressively anti-LGBTQ activities than the Chick-fil-A Foundation was willing to fund even before it said it would stop in 2019. People who have boycotted the company might be hard-pressed to see a distinction between Chick-fil-A’s profits going to anti-LGBTQ groups through its charitable arm or Chick-fil-A’s owner donating to even more politically active organizations as a private citizen.

An NCF spokesperson said that the group is “honored” to have so many donors and that much of the organization’s funds go to “providing clean water to the thirsty, rescuing victims of human trafficking, translating the Bible into new languages, and much more.”

“NCF does not develop or implement strategies about which charities or causes to support,” the spokesperson said. “All grants are initiated by the recommendations of our givers.”

Pride in Pictures: Helping our trans child become her true self