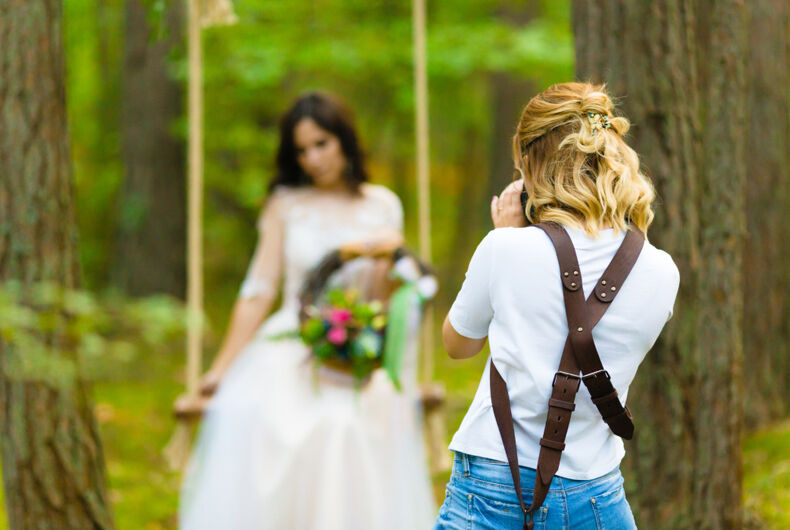 A photographer is suing the state of New York for not letting her post a “no same-sex weddings” policy on her website, saying that she should get a religious exemption to the state’s anti-discrimination laws because she is a Christian.

And to prove her sincerity, her lawsuit says that she also refuses “Halloween or Vampire-themed weddings” too.

No one sued Emilee Carpenter because she’s refused to photograph a same-sex couple’s wedding. But that’s not going to stop the devout Christian from suing the state of New York to overturn its ban on public accommodations discrimination based on sexual orientation.

Carpenter filed a federal lawsuit Tuesday alleging that the state’s civil rights laws violate her First and Fourteenth Amendment rights because she “believes that God created marriage to be a joyful, exclusive union between one man and one woman.”

She says that photographing a same-sex couple’s wedding would violate her freedom of religion, because working at one for money is the equivalent of being forced to say that she supports marriage equality in general.

“Just as the government cannot compel a lesbian baker to create a cake condemning same-sex marriage or an atheist playwright to wax positively about God, New York cannot force Emilee to convey messages she objects to,” her lawsuit says.

It’s an odd comparison. A cake “condemning same-sex marriage” would probably have some writing on it stating a political belief, and a play is itself a form of writing. But even if a same-sex couple asked Carpenter to take pictures at their wedding, she still would not be forced to say something like “I support marriage equality in general.” Any materials related to taking photos would, at most, say that the wedding happened, which is just a statement of fact.

The lawsuit even claims that not being allowed to put a message on her website saying she discriminates against LGBTQ people is already violating her freedom of religion.

In the past, one argument used against lawsuits like this one is that this “sincerely held religious belief” only gets applied to same-sex couples. The baker or photographer argues that they can only work at weddings that conform to their Christian beliefs, but then they have no problem working for non-Christian weddings.

Carpenter, though, thought of that in advance. Her business doesn’t just refuse gay people, it refuses vampires as well.

“Emilee would not provide wedding photography for certain types of irreverent themed weddings—such as Halloween or Vampire-themed weddings—because Emilee believes that all wedding ceremonies are inherently religious and solemn events,” her lawsuit says.

The SPLC-designated hate group Alliance Defending Freedom (ADF) helped her file her suit. Their leadership has linked being gay with pedophilia in the past and they are involved in several lawsuits for religious exemptions to LGBTQ anti-discrimination laws.

The Supreme Court has not ruled on whether the Constitution allows Christians to break anti-discrimination laws when it comes to LGBTQ people specifically, but a case involving religiously-affiliated adoption agencies who want to discriminate against queer couples is currently before the Court.

Rosie sold her mansion for a $1M loss. It will be torn down & replaced with affordable housing.