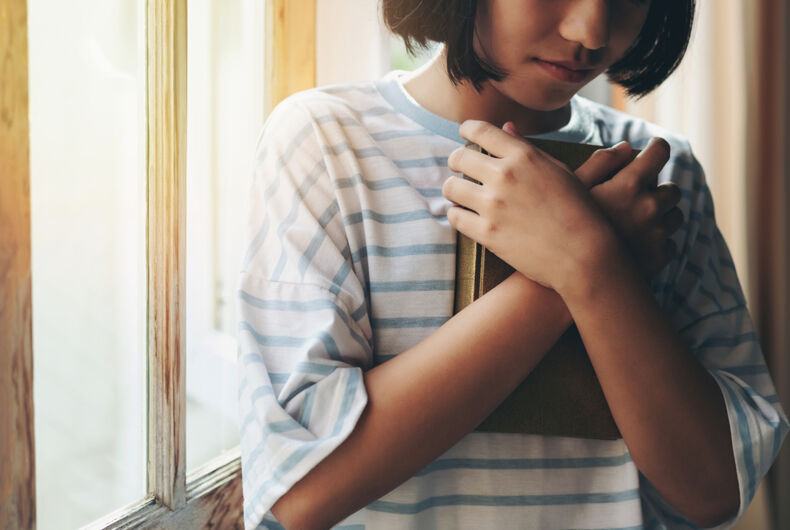 Thirty-three LGBTQ students who attended religious colleges and universities have filed a class-action lawsuit against the Department of Education, saying that giving religious exemptions to colleges so that they can discriminate against LGBTQ students resulted in harassment, conversion therapy, expulsion, and humiliation.

Danielle Powell is one of the plaintiffs, and she attended Grace University in Nebraska. She’s pansexual, and in her senior year she had feelings for another woman at the school and she came out.

She said that the school put her through a disciplinary process, punished, humiliated, and ultimately expelled her. But that wasn’t enough – Grace University demanded that she reimburse the school for the thousands of dollars she had already received in scholarship funds.

“I have lost so much due to Grace University’s actions,” Powell said. “I lost respect, equal treatment, vocational opportunities, financial earnings, anonymity, etc. I do not want other students to have to face these same losses.”

Grace University received federal funds until it closed several years ago, like most colleges in the U.S. But the federal government isn’t doing anything about their actions because Title IX, the law that bans discrimination based on sex (and, therefore, bans anti-LGBTQ discrimination) in educational programs, has a big religious exemption.

Many colleges and universities openly discriminate against LGBTQ people, even writing out explicit policies that ban students from coming out, forcing them to present as their sex assigned at birth, prohibiting them from forming clubs, and banning dating someone of the same sex. Title IX’s religious exemption says that that’s fine since “an educational institution which is controlled by a religious organization” can discriminate if the ban on discrimination based on sex “would not be consistent with the religious tenets of such organization.”

A group of current students, students who got expelled, and alumni of exempt schools formed an organization called Religious Exemption Accountability Project (REAP) and they’re suing, saying that the federal government is handing out billions – $4.2 billion in just 2018 – to schools that aren’t protecting their equal rights.

The plaintiffs in Hunter v. Department of Education are from 18 different states and attended 25 different colleges and universities, all associated with Christianity.

Students usually apply to colleges as teenagers and they’re often minors when they make a decision about where to go, before they have had a chance to explore their identity. Some face family pressure to attend a religious school, and getting financial aid for college requires help from parents that can be used as leverage.

The result is that 100,000 LGBTQ students are attending schools that discriminate against them, receive federal funds, but are exempt by the Department of Education from enforcing Title IX, according to REAP.

These students are forced to hide their identities, which can cause harm. And these policies result in other material harms to students.

Elizabeth Hunter is the lead plaintiff in the lawsuit. She was put in the foster care system until the age of 10 and placed with a family that was part of a fundamentalist Christian cult in Texas. Her parents didn’t want her to attend college because she’s a woman, but she applied to the fundamentalist Bob Jones University (BJU) because she thought it was one of the few schools she could attend without getting disowned.

Hunter said that BJU’s anti-LGBTQ policies “created a scary, harsh environment” for her as a lesbian.

In her junior year, she posted online about a book she was reading that had a lesbian character. She was summoned to a meeting with administrators and told she “must be gay.” The administrators told her to “disavow” same-sex relationships, and when she refused she was put on disciplinary probation, forced to pay a fine, and forced to undergo therapy.

“This was the darkest month of my entire life,” Hunter said. “I felt depressed and suicidal. For the rest of my time at BJU, I was forced completely back into the closet and had to hold my head down in shame. I survived and graduated in May of 2019. But I still feel the sting of the discrimination I endured.”

That she attended BJU highlights the limits of religious exemptions under the law. In the 1970s, the IRS took away BJU’s tax-exempt status because they banned interracial dating. The school argued to the Supreme Court that the IRS was violating its religious freedom because it had a sincerely held religious belief against interracial dating.

In its 1983 decision in Bob Jones University v. United States, the Supreme Court ruled that the First Amendment didn’t give BJU the right to have a racist policy and get money from the government in the form of tax-exempt status. The Supreme Court specified that their decision is applicable “only with religious schools — not with churches or other purely religious institutions.”

The REAP lawsuit says that the Title IX religious exemption is unconstitutional, denying LGBTQ students their Fifth and Fourteenth Amendment rights to equal protection and due process. The Department of Education, the lawsuit says, is giving taxpayer funds to universities that force LGBTQ students to hide their identities, that deny them equal rights and benefits, that refuse to recognize same-sex marriages on par with how they recognize opposite-sex marriages, and that refuse to protect LGBTQ students from harassment and discrimination.

The lawsuit also says that the religious exemption violated the First Amendment since the government is requiring secular colleges and universities to fight discrimination but is letting religious schools off the hook.

But due to changes made during the Trump era, colleges and universities don’t even have to claim a religious exemption until they’re under investigation for discrimination. Moreover, they don’t actually have to be associated with a religious organization, they just have to claim that they are influenced by sincerely held religious beliefs and show minimal proof – like maybe something on their website – of these beliefs.

Last, even though Title IX requires schools to show that anti-discrimination law is inconsistent with their beliefs, the Trump administration lifted that requirement. If a school claims a religious exemption, it doesn’t have to show how its specific actions were required by its religious beliefs.

Another plaintiff, Audrey Wojnarowisch, is a student at George Fox University, and she is bisexual and non-binary. The school officially bans students from having same-sex relationships.

Wojnarowisch said that she was the victim of sexual assault by a female student during her first year at the school, but she worried about reporting it since she thought that the school would use it against her. When she did report the assault, the school didn’t take it seriously and file a Title IX report like they’re required to.

Chandler Horning, a gay man who attended Brigham Young University – Idaho, which bans same-sex relationships, is also a plaintiff. He said that he was out when he was doing online classes at the school, but when he attended in person he went back into the closet and worried about being outed and then expelled.

He was especially worried about losing student housing, because students who are expelled are given three days to leave campus housing.

“Losing my housing would have left me homeless in rural Idaho,” he said.

Update: A previous version of this article incorrectly said that Grace University was in Louisiana and did not note that it closed permanently in 2018. We regret the error.

An anti-trans GOP lawmaker tried to justify himself with “science.” He failed miserably.

Want to be happier? Own less stuff.