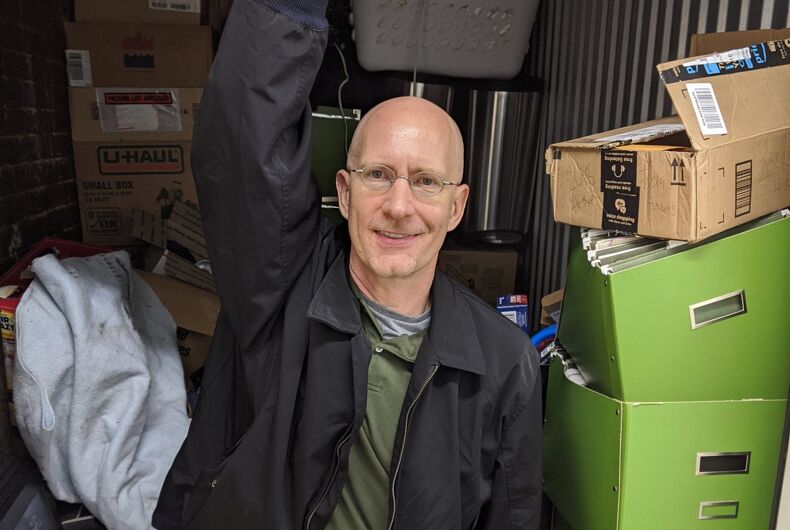 Back in 2008 when we were waiting out the crashing real estate market, we moved into the basement of some friends —and put everything we owned into a storage locker.

A year later, we opened the locker and the damnedest thing happened. This stuff we’d thought was so important when we’d put it into storage? We realized we hadn’t even thought about it for the whole year. And most of it, we wondered why we’d kept it at all.

Related: I escaped to the United States from Jordan. Nobody deserves to live in fear every day.

Sure, we needed furniture for our new place, and kitchenware, and art. And we had a few treasured keepsakes — but not nearly as many as we’d thought. Most of our stuff seemed completely interchangeable.

We might have saved money by donating most of it to charity and starting over again.

Which makes it all the more ironic that four years ago when we became digital nomads, traveling the world full time while working remotely, we did the same thing again.

It’s true, we’d gotten rid of much more of our stuff this time and had a much smaller storage locker. But since we didn’t know if this crazy new nomad life of ours would last, we did hang on to some things.

And once again, when we returned to the locker after that first year away, we hadn’t thought about or missed our stuff all year long. And we asked ourselves: Why did we keep this?

We’ve since realized something else. We don’t really care about “things.” They’ve never made us happy.

Sure, we all need basic necessities to survive. But do we really need all this stuff?

On the contrary, traveling the world as digital nomads was what made us happy. We were seeing lots of different places, living in countries like Italy, Bulgaria, Thailand, Vietnam, and Mexico, and making a ton of interesting new friends along the way.

We also happened to be living in countries that seemed to take the quality of life much more seriously than America. Unlike America, in many other countries, you work to live. You don’t live to work.

Social status there is much less about people owning the biggest house or driving the most expensive car. On the contrary, if you show off too much, people can think you’re a dick.

Which made us see our home country with completely different eyes.

When we lived in America, we bought a lot of stuff, because that’s just what most people do. And marketers sell their stuff by promising that you’ll be happier once you do.

It’s a complete lie, of course. On the contrary, once you buy into the lie that “things” can make you happy, you end up in a place where it’s almost impossible to actually be happy. Because there will always be someone who has more stuff than you — and some “thing” that you still have to buy that will finally make you happy once and for all.

The message is so ubiquitous in America that we never really questioned it. But now we reject it completely.

We still have a very small storage locker, for documents and truly treasured possessions. But now we carry most of what we own with us in our backpacks. It obviously isn’t much.

But there’s a real purity in this. If we want to buy something new, we have to get rid of something old. When it comes to personal possessions, our lives literally have to be in balance. Otherwise, we break our backs!

We feel so much happier now, no longer weighted done by so much stuff — or by crazy ideas about what makes a person happy.

Since we have so much less stuff, we spend less too. And because our lives are so much more flexible now, we can also live in countries that are extremely cheap by Western standards.

But spending less money means we have to earn less. Which means we don’t have to work as hard. Which brings an entirely different kind of happiness. More freedom!

That last one is especially important. Debt isn’t a physical burden, but boy, it sure does weigh you down.

Yes, we’ve been able to do this because of many different kinds of privilege. But we think our lifestyle choice is open to far more Americans and Western Europeans than most people think.

Before we started doing this, we were lucky enough to work online, but we were definitely not rich. In fact, if we hadn’t become nomads we probably would’ve had to have left Seattle anyway because we couldn’t have afforded to keep living there.

We’re too old to be millennials but we absolutely identify with them, and younger generations, on the idea that experiences are far more important than possessions. We also join them in completely rejecting the American mentality of materialism and consumerism.

Everyone agrees you should spend your money wisely, but we’d go one step further and say: spend your time wisely too. Because that’s the most precious and valuable thing you own by far.

So get rid of your stuff! Or at least as much as you can.

It took us two different storage lockers and three years of travel to really understand the message. But now that we’ve done it, we’ve never felt so free — and happy.

Brent Hartinger is an author whose latest book, Project Pay Day, is available for preorder, and Michael Jensen is the former editor of AfterElton.com. Visit them at BrentAndMichaelAreGoingPlaces.com, or on Instagram or Twitter. They are currently living in Puerto Vallarta, Mexico, until they can get vaccinated.