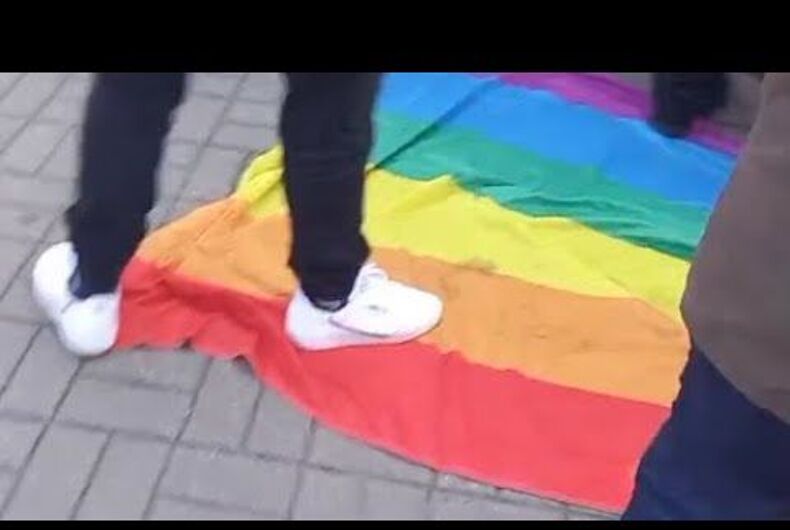 A festival goer wipes their feet on the LGBTQ Pride flag at a festival to honor Poland's Independence DayPhoto: Screenshot

Poland, which has become one of the most anti-LGBTQ countries in Europe, has started to backpedal slightly after international condemnation and economic sanctions. But during a festival to honor the country’s Independence Day, a far-right nationalist group helped locals express their hatred of LGBTQ people. It threw a Pride flag on the ground and invited people to trample on it as a sign of disrespect.

Polish cities have been passing resolutions for the past two years declaring themselves “free of LGBT ideology” as homophobia intensifies in the Eastern European country. One-third of people in Poland are now estimated to live in an “LGBT-free zone.”

Celebrations were banned by the courts this year over fears of violence from the far-right groups. Approximately 100,000 people attended the Warsaw festival according to local news reports.

Attendee Iwona Oleksy filmed the disgusting display of hate; the group streamed it live on Facebook without any repercussions from the social media site. Facebook has been repeatedly decried for allowing anti-LGBTQ content to remain on the site while censoring pro-LGBTQ photos and posts that condemn the religious right.

In September, European Commission President Ursula von der Leyen said in her State of the Union address that “LGBT-free zones” are “humanity-free zones.”

“They have no place in our Union,” she said. “I will not rest when it comes to building a union of equality. A Union where you can be who you are and love who you want – without fear of recrimination or discrimination.”

She did not mention Poland by name.

The LGBT-free zones are mostly in the southeast of the country. The movement, led by the Law and Justice Party (PiS), is meant to remove LGBTQ “propaganda” from public, which proponents of the measures see as “Western decadence” and believe LGBTQ people “threaten our identity, threaten our nation, threaten the Polish state.”

Activists inside the country have been fighting back with ingenious methods. The British embassy in Poland used the International Day Against Homophobia, Transphobia, and Biphobia to continue the campaign with embassy staff wearing rainbow face masks and posting photos on the embassy’s social media accounts.

Pride parades in the country turned violent in 2019 as rightwing demonstrators attacked marchers.

Am I nonbinary? A guide to what it means to identify outside the gender binary