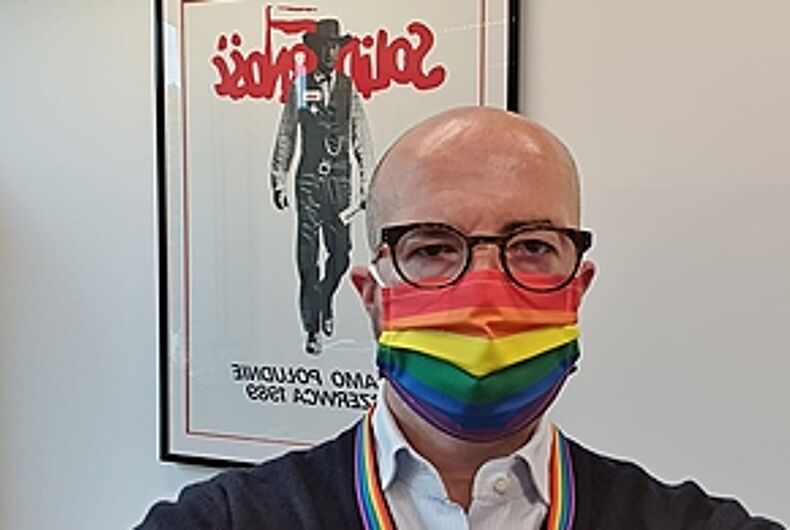 The British embassy in Poland used the International Day Against Homophobia, Transphobia, and Biphobia (IDAHTB) to decry the country’s attacks on LGBTQ people as part of an authoritarian turn in the government.

Several parts of the country have declared themselves “LGBTQ-free zones” and activists inside the country have been fighting back with ingenious methods. Embassy staff continued the campaign by wearing rainbow face masks and posting photos on the embassy’s social media accounts.

“While right now we all need to focus on fighting COVID-19, we must not forget to continue protecting the values in which we believe,” the British Ambassador to Poland, Jonathan Knott, said.

“On International Day Against Homophobia, Biphobia and Transphobia, we reaffirm our support for efforts to raise public awareness of issues affecting the lesbian, gay, bisexual, transgender and intersex (LGBTI) community, and pay tribute to the hard work of LGBTI people in Poland, the UK and around the world to ensure human rights and dignity for all.”

“We continue to be committed to protecting all people from violence and discrimination on the basis of sexual orientation or gender identity, and ensuring that every individual enjoys equal opportunities,” he continued.

After the Polish Parliament voted to continue considering a law that links homosexuality and pedophilia in an attempt to ban sex education, a gay couple started sewing and distributing rainbow facemasks for free, fighting both coronavirus and homophobia.

But instead of being silenced, Jakub Kwiecinski and Dawid Mycek saw an opportunity to spread a message.

The embassy tagged the two in a Tweet showing staff wearing similar masks.