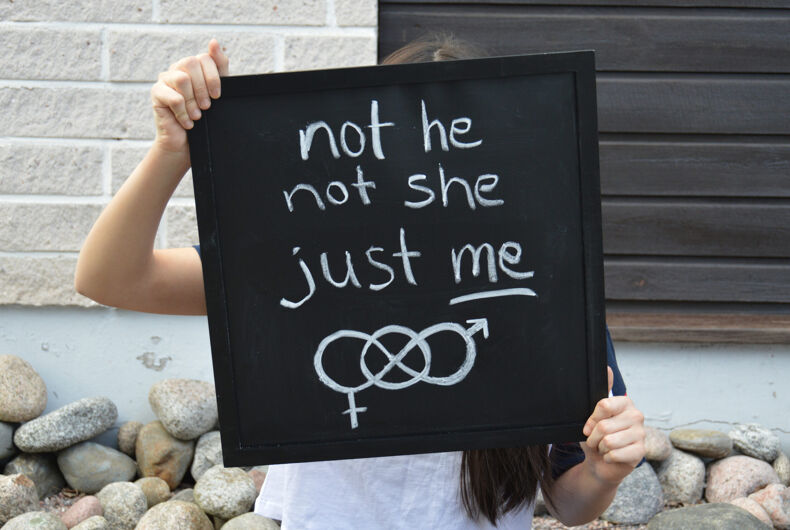 For most people, gender is black and white. A binary consisting of two opposite identities: male or female.

But not everyone feels this way. For some people, gender is more like a spectrum: a continuum in which all kinds of colors can exist. In simpler terms, these people – often labeled as non-binary people – feel as if they don’t align with such strict, binary distinctions of gender.

If you can relate to this, or if you’ve ever asked yourself “Am I nonbinary?”, don’t worry. Identifying as non-binary is more common than you think. In fact, a recent study found that there are over 1 million non-binary adults in the US alone.

But what does it really mean to be a non-binary person? Is there more than one way to be non-binary? And how do you come out and come to terms with your gender identity? In this guide, we answer some of the most frequently asked questions about being non-binary.

Do I Need To Take An “Am I Nonbinary” Quiz To Find Out If I’m Nonbinary?

Not necessarily. You just need to understand what it means to be nonbinary.

According to the Human Rights Campaign, nonbinary is a term used to describe people who do not identify exclusively as male or female. For non-binary people, gender is a spectrum rather than simply two fixed categories.

As such, NB people can identify as being both a man and a woman, lay somewhere in that spectrum between masculine and feminine, have a gender that fluctuates over time, or even feel as if they fall outside of the gender spectrum altogether.

It is important to note that the term “non-binary” exists both as an individual gender identity* and an umbrella term under which other labels exist. Some of the terms that fall under the non-binary umbrella include:

*Gender identity, as defined by HRC, refers to one’s “innermost concept of self as a man, woman, blend of both, or neither”. Your gender identity is how you perceive your own gender. This is not to be confused with gender expression, which is how you choose to express your gender, whether through your clothes, behavior, etc.

What Nonbinary Is NOT

Non-binary people have existed across a variety of cultures for centuries. Some examples of non-binary identities include the two-spirits of the Indigenous American peoples, the kinnar or hijra of India (who are recognized as a third gender), and the babaylan, who were spiritual leaders in pre-colonial Philippines.

Despite this, in much of the Western world, the term “non-binary” is relatively new, having only come to popular use in the last few decades. As such, there are still many misconceptions about the term and how it differentiates from other identities.

Is Identifying As Nonbinary The Same As Being Transgender?

Nonbinary people and transgender people have a lot in common, although these terms refer to distinct experiences.

It should also be noted that trans people do not necessarily have to medically or physically transition to identify as trans. In the same vein, not all nonbinary people have to express themselves in a gender-fluid or androgynous way to identify as nonbinary.

Am I Nonbinary If I’m Intersex, And Vice Versa?

Most intersex people will identify as either male or female (or will have been assigned a sex at birth). You can also be intersex and nonbinary, but it isn’t necessarily the case for all. On the other hand, nonbinary people do not typically identify as intersex unless they have the anatomical or genetic characteristics of an intersex person.

Navigating The World As A Non-Binary Person

As we’ve already mentioned, there are over 1 million nonbinary adults living in the US. And many of these are young people. This growing number of out non-binary people can be attributed in part to increased representation in the media, with celebrities like Jonathan Van Ness and Demi Lovato coming out as non-binary in recent years.

We’re also seeing more non-binary people in the world of sports and politics. For the first time ever, out nonbinary athletes like Canada’s soccer star Quinn and US skateboarder Alana Smith represented the community at the Tokyo 2020 Olympics. More and more countries, including the US, are working to provide trans and non-binary people with legal protections against discrimination as well.

Overall, it has never been a better time to identify as a nonbinary person. However, that doesn’t mean that coming to terms with your nonbinary identity won’t prove to be challenging at first.

The coming out process will be different for everyone and will depend on a number of factors, from how old you are to how understanding your family and friends are about queer people.

While more and more people are becoming familiar with different types of sexuality, gender non-conformity can be a bit more difficult to process, especially since most people grow up with a binary understanding of gender.

When coming out to friends and family, consider the following:

Do I have enough resources to explain the nuances of gender and sexuality to people who might not get it?

If the answer is no, it’s important that you do your research first and try to see where your loved ones are coming from. Be open to the possibility that, for some people, “getting it” will take some time. After all, if it took you some time to come to terms with it, what more others?

Is it safe for me to come out?

This is especially important for young people who still live with their families. As hopeful as we want to be that society has progressed beyond trans and homophobia, unfortunately, not everyone will be accepting of different people. If you feel that coming out could jeopardize your mental health, physical safety, or financial security, consider holding off until you are a little more independent.

Not everyone has to change their pronouns. Your pronouns are also not a reflection of your gender identity – anyone can use any pronoun they like. Only use pronouns (and names) that make you feel comfortable and validated.

Just because you identify as non-binary, it doesn’t mean that you have to dress in a gender-neutral manner all the time. There is no one specific way to be non-binary. As such, there is no one way to dress, look, and act as well.

Dress and act according to the gender expression that feels right for you, whether that means donning more feminine, masculine, or androgynous clothing. And remember, clothes don’t have gender. Pants are just pants and skirts are just skirts, and anyone, regardless of their gender, can look good in them.

You don’t have to take a 20-point “Am I non-binary?” quiz to figure out if whether you’re non-binary, genderqueer, genderfluid, or agender. Ultimately, all you have to do is to open yourself up to the fact that the gender spectrum is rich and colorful, and that you can find a place on it no matter how you identify.