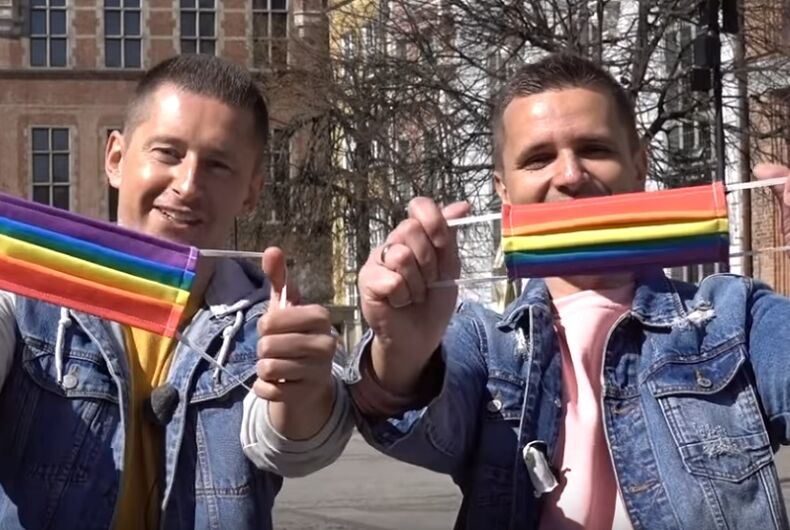 Dawid and Jakub show off their masksPhoto: YouTube screenshot

A gay couple is sewing and distributing rainbow facemasks for free in Poland, fighting both coronavirus and homophobia.

Just last week, the Parliament of Poland voted to continue considering a law that links homosexuality and pedophilia in an attempt to ban sex education. Cities all over the country have declared themselves “LGBT-free zones.” Prides in the country turned violent last year as rightwing demonstrators attacked marchers.

Related: A gay couple publicly proposed 100 times in Poland. What happened is incredible.

But instead of being silenced, Jakub Kwiecinski and Dawid Mycek saw an opportunity to spread a message.

Facemasks have been sold out for months in Europe – scam facemask websites are popping up and getting shut down by police – and authorities are recommending that people use alternative facemasks made out of cotton if they need to go out.

With a borrowed sewing machine and a lot of rainbow-colored cloth, the couple and their dressmaker friends made 300 masks and then gave them away in the streets in and around Gdansk, a city on the Baltic coast in northern Poland.

The couple said that they’re not selling them, only giving them away. They still have fabric left over and are planning to make some more.

They put together a video of them handing out the rainbow masks, showing that they’re not limiting them to LGBTQ people and allies, but just handing them out to any stranger they see in the street.

“It’s rainbow, and I know you are an ally,” Kwiecinski said as he handed a mask to a man loading up a truck.

“I’m not against it,” the stranger responded.

The couple has responded to hate with positivity before. In 2016, they made a fan video for a song that got some attention on YouTube, as well as a lot of hate and death threats.

“Our video became popular in Poland but fame came in pair with hate and threats,” Kwiecinski told LGBTQ Nation at the time. “We received many messages like: ‘You should be sent to gas chamber,’ ‘I will cut your throat when I meet you,’ ‘Your neighbors are coming after you.’”

So they made another video about love. “No matter if you are boy or girl, young or old, gay or lesbian or heterosexual – everyone needs somebody. What really counts is love.”

Conservative Christians calls for a boycott of Disney over DuckTales episode