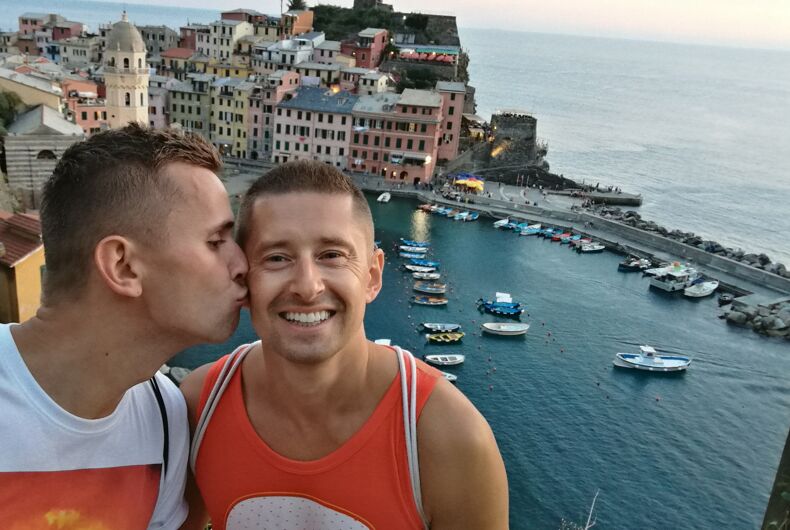 Back in August, a Polish gay couple made headlines with their viral fan video for Roxette’s “Some Other Summer” highlighting same-sex love in a country where LGBT people have few legal protections. Now, they have a second video out and plans to be part of the band’s official video for the song.

“When we did our ‘coming out’ video to one of Roxette’s [songs] we used to say ‘never again.’ It was supposed to be one time only,” Jakub Kwiecinski, who made the videos with his boyfriend Dawid Mycek, tells LGBTQ Nation. “When we got such a great response around the world we thought we might do another one in further future.”

Part of that response was thanks to the band discovering their video and sharing it online. Before long, the video had thousands of views. And Roxette is planning to feature part of their project in the song’s official music video, Kwiecinski says.

“At the moment we are thrilled because Roxette got inspired by our first video and invited us to their new official video,” Kwiecinski says. “It will be based on various ‘fan videos’ with our special appearance.”

But not all the responses were positive. He says the release of their fan video for Roxette’s “Some Other Summer” also sparked hateful comments and even death threats.

“Our video became popular in Poland but fame came in pair with hate and threats,” Kwiecinski says. “We received many messages like: ‘You should be sent to gas chamber,’ ‘I will cut your throat when I meet you,’ ‘Your neighbors are coming after you.’”

The hate caught them off guard at first, but they eventually learned to shrug it off.

“We weren’t ready for it so we had really bad moments but we moved on. We learned not to care about it and started thinking, ‘We have to respond to all of this,'” Kwiecinski recalls. “And the most obvious way for us to do it was making a new video.”

Inspiration struck during these hard times when friends dragged the couple traveled out of the house to spend some time by a lake.

“We heard the RedOne and Enrique Iglesias song ‘Don’t You Need Somebody’ and we thought — this is it,” Kwiecinski says. “It was a time we really needed somebody and they were there for us so lyrics fitted us perfectly.”

The couple also chose to highlight their friends and allies in the video — which features gays, lesbians, and their friends — “just to show haters and homophobes that they are people who accept us, support us, and whose opinion is important for us.”

While the couple’s first video highlighted their love, sending a message about the equality of same-sex relationships, Kwiecinski says they wanted “Don’t you need somebody” to touch on more universal themes.

“Most of our friends are gay or lesbians so it was quite natural to make same-sex love video. We also added to the video David’s mom who supported us every day and two our heterosexual friends,” Kwiecinski explains. “Thanks to them meaning of the words ‘Don’t You Need Somebody’ is wider. No matter if you are boy or girl, young or old, gay or lesbian or heterosexual – everyone needs somebody. What really counts is love.”

He says he hopes to show people in Poland that LGBT people deserve to love and be loved just like everyone else. In Poland, LGBT people have few legal protections and things have taken a turn for the worse over the last year.