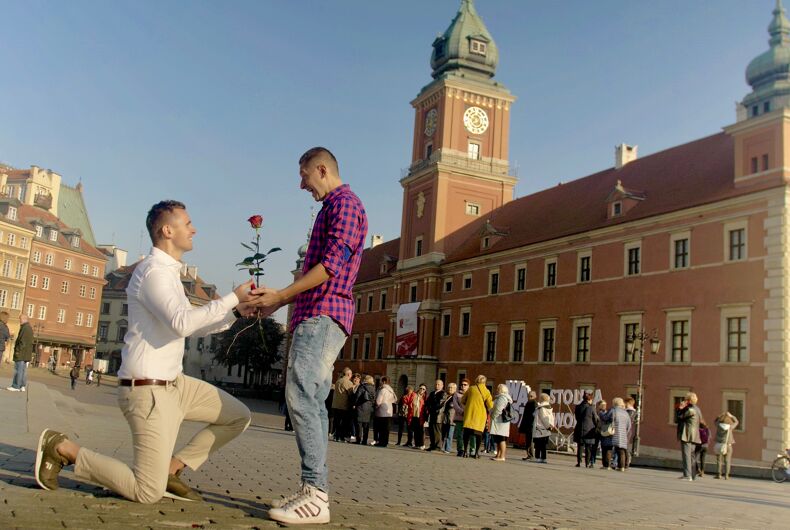 Jakub and Dawid get "engaged" in Poland.Photo: provided

Jakub Kwiecinski and his husband, David, have become viral superstars in Poland. While the former Eastern Bloc country frequently makes the news for anti-LGBTQ attacks or government actions, these two are pushing boundaries with their videos.

“We had doubts before we posted on YouTube,” Kwiecinski told LGBTQ Nation after their first video went viral internationally. “Polish society is very conservative and we were a bit afraid of [the] response, but we also wanted to show people that we – gay people – are absolutely normal and our love has no difference to their love.”

They’ve had some blowback in the conservative country, so the two decided to test how homophobic Polish people truly are.

Using hidden cameras, the two men proposed to each other over 100 times in public to gauge reactions from passers-by. Even better, they enlisted some strangers into helping to document their “special moment.”

“We planned to do it for a day or two,” Kwiecinski tells LGBTQ Nation. “But we received only good reactions.”

“So we thought, damn, no one will believe us or they’ll say we didn’t catch enough people. So we had to keep doing it.”

Kwiecinski says the two bought pepper spray to prepare for the video shoot, but it wasn’t necessary. Out of the dozens of reactions, only a couple were negative.

The Polish president recently said he would institute a Russian-style “gay propaganda” law that would ban LGBTQ media, literature, and gatherings like Pride.

“While in the bigger cities like Warsaw, a very progressive and queer scene is developing, the opposite is happening on the countryside,” political scientist Rémy Bonny told LGBTQ Nation.

“The current government gets most of their votes on the countryside. These attacks on the LGBT community are a political strategy to win the votes of the people living in the Polish countryside.”

“Our project shows that he might learn tolerance from the ordinary people on the streets,” Kwiecinski said.

Lesbians forced to quit saving lives because they’re ‘too gay’

Police need help in the murder of a Baltimore trans woman