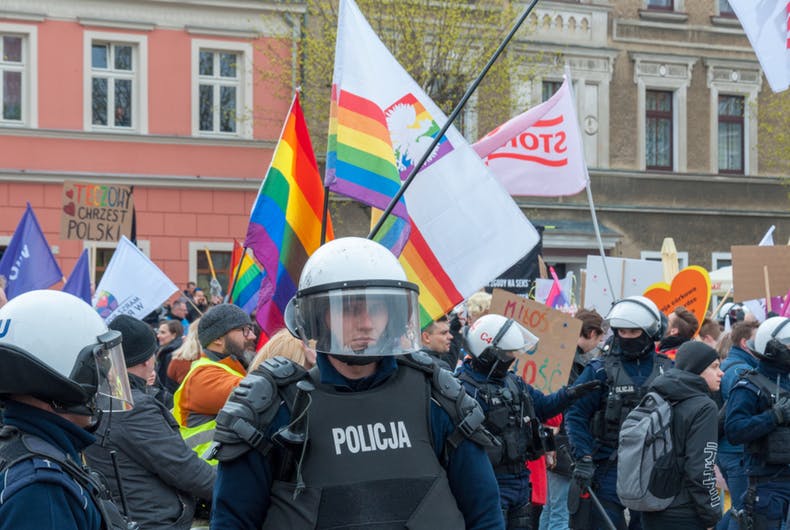 In December, the European Union Parliament formally condemned Poland for trying to create “LGBTI-free” zones, with lawmakers comparing the policies to “Jew-free” zones that existed during World War II.

Despite this, approximately one-third of Poland territories now declare themselves as such. That amounts to over 80 different municipalities or territorial areas — more than double the 30-plus areas whose local governments had already declared themselves as “LGBTI-free” zones and had passed anti-LGBTQ resolutions from July. The increase suggests that the queerphobic laws have swayed other elected officials to emulate them.

Related: Poland is intervening to stop a gay couple in the UK from adopting a kid

A map designed by the activist group Atlas of Hate shows that several other areas that have not already adopted or enacted anti-LGBTQ policies have them under consideration, or are dealing with “lobbying activities” to that effect.

“We call on the Polish Government to repeal all anti-LGBTI resolutions in accordance to national [anti-discrimination] law,” Atlas of Hate researcher Kuba Gawron said in a statement. “Such resolutions are a threat to LGBTI community and create an atmosphere of consent for violence.”

While anti-LGBTQ policies are not new in Poland, the idea of removing all public LGBTQ “propaganda” is derived from the recent agenda of the Law and Justice Party (PiS), the new majority party in Poland, led by Jaroslaw Kaczynski. Their anti-LGBTQ platform succeeded at the booths in elections this past fall.

Kaczynski has previously told his supporters, “We don’t have to stand under the rainbow flag,” asking for Poles to defend themselves from “Western decadence.” He has also claimed that LGBTQ people and those that support them “threaten our identity, threaten our nation, threaten the Polish state.”

Related: How did violence against LGBTQ people in Poland get so aggressive suddenly?

Even outside of the legislature, businesses have been rewarded for being “free” of promoting LGBTQ ideology, and Pride marches have routinely come under attack. Last year, a far-right magazine distributed “LGBT-FREE” stickers with copies of its publication, to condemnation from American and Polish officials.

The advocacy group Human Rights Watch has determined that “Poland’s LGBT community has been under regular attack by the ruling party” and that “the government actively undermines the rule of law and human rights protection.”