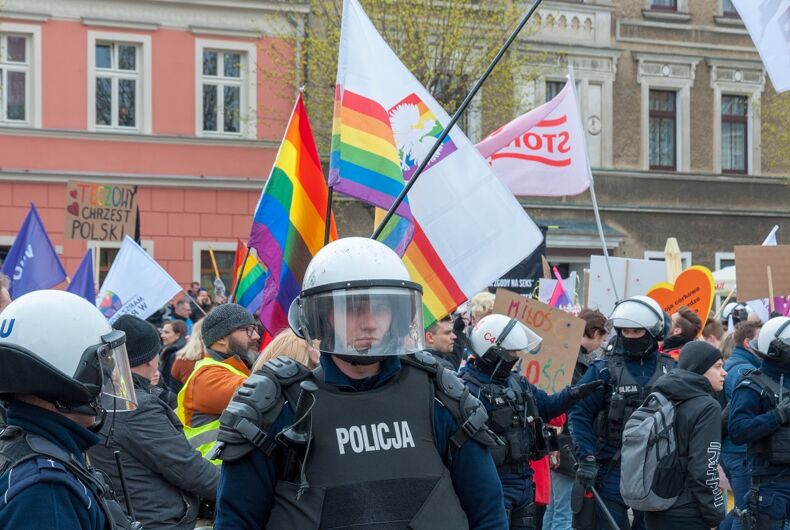 Poland, Gniezno - 13 April 2019. Police during a Gay Pride in the first capital of PolandPhoto: Shutt

In the last year, the homophobic discourse within Polish politics has risen considerably and several high-ranking government officials made anti-LGBTQ statements.

The prominent Polish LGBTQI-activist Dominik Kuc told me a few months ago, PiS (the ruling, rightwing Law and Justice Party) was searching a new enemy of the state. With the previous general elections in 2014 – their common enemy were Muslim migrants. Since almost no migrants with a Muslim background came to Poland, they could not use this strategy again. That’s why they’ve chosen for LGBTQ people this time.

Back then, Kuc told me that he was not sure if this strategy was going to be as effective for the ruling party as it was in 2014.

Indeed, the LGBTQI-movement and scene in Poland is well-organized and obtained a lot of sympathy in several levels of society in the last decade. Warsaw Pride (Parada Rownosci) attracts tens of thousands of participants every year and the LGBTQ nightlife scene is vibrant in the bigger cities. Pride marches will be held in no less than 24 Polish cities this year – an all-time record.

However, the environment for LGBTQ people becomes way more conservative the moment you leave the bigger cities. That’s where the main voter base lays for the ruling party.

Related: Is Poland about to issue a Russian-style ‘gay propaganda’ ban?

With the help of the Catholic Church, PiS has set up an election campaign strategy on fighting LGBTQ people.

Also with the recent violence during the Pride in Bialystok, PiS is accused of being behind the aggressors. The mayor of Bialystok, Tadeusz Truskolaski, announced that he will ask the prosecutor’s office to start an investigation on the involvement of local PiS members in the violent protests of last weekend.

The political debate around LGBTQ rights has become considerably aggressive. But this is something that has started already more than a year ago. This month there’s violence, but the LGBTQ community has been the targeted victim of political verbal violence for already over a year.

The first signs of an increased attention of the conservative right-wing party PiS towards the LGBTQ community were in the summer of 2018.

With a ruling of the Supreme Court of Poland that a copy centre should not have denied their services to an LGBTQI-organisation, the Minister of Justice (who is at the same time Prosecutor General) Zbigniew Ziobro declared that he would do whatever in his power to overrule this ruling. He succeed later.

In the same summer, another Polish minister questioned the legitimacy of the LGBTQ movement within the Polish civil society.

Minister of Internal Affairs Joachim Brudziński announced that he would like to prosecute LGBTQ activists for desecrating the Polish national symbols. He said that after activists made a flag with the Rzeczpospolitej (the national emblem of Poland) with rainbow colors around it.

There has been no prosecution in this case, but earlier this year a police investigation was opened in a similar case.

By the end of last year, it became more clear that there was a wider and better researched strategy behind these homophobic comments.

In his 11 November (the Polish Independence Day) interview, President Andrej Duda stated that he would consider an anti-gay propaganda law if he had the power to do so. Since this kind of legislation is considered to be a Russian invention and the political discourse (including by the ruling party PiS) and Poland is russophobic, this was very remarkable. Until now, no attempt to introduce something like this was made.

It was the start of an intensive election year in Poland. 2019 has two important elections: the European elections and the parliamentary elections.

In March leading figures of PiS more officially announced their anti-LGBTQ campaign. Senator Stanislaw Karczewski posted a graphic on Twitter of an umbrella with the logo of PiS on and a family under it. The umbrella prevents them from being ‘infected’ by a rainbow. The tweet went viral.

A week later, party leader Jaroslaw Kaczynski called the LGBTQ movement directly in a speech during a big convention of PiS in Katowice. “Hands off our children,” he said.

Homophobic comments by leaders in a “role model” position are very dangerous, especially in a country where 70% of LGBTQ youngsters think about suicide (see this video). But still, comments by politicians are one thing, political action is still a step further.

Until May, no real legal actions by the ruling party were undertaken against the LGBTQ community. This stopped when an Amnesty International activist was arrested and her apartment in Warsaw was searched. She was arrested because she made and hanged stickers of “Our Lady of Częstochowa” with a rainbow halo.

Minister of Interior Brudzinski later declared that she is suspected of “profaning the image of the Holy Mother.” He added: “No fool of freedom, nor tolerance has the right to offend the feelings of believers.” This is the first political imprisonment in Poland and the European Union since the fall of the Iron Curtain.

Two weeks ago, the government-supported newspaper Gazeta Polska announced they will distribute “LGBT Free Zone” stickers. Many commentators compared these stickers to the actions of the Nazis in the 1930s.

Given the events of the last year, it is no wonder that extremist groups (whether or not supported by PiS) feel comfortable enough to use violence against the LGBTQ community. With a government that is constantly targeting and scrutinizing the LGBTQ movement, they are orchestrating these violent attacks.

The first and foremost positive thing that happened was the capital city Warsaw declaring itself to be LGBTQ tolerant. Therefore they signed an “LGBT+ declaration” in which the city agrees to undertake actions to ensure LGBTQ equality.

The second reason for hope is the increased visibility of Robert Biedron as an opposition leader in Poland. Biedron was the former spokesperson of KPH – the main LGBTQ organization in Poland. Later he became the first openly gay member of the Polish parliament. He became popular as mayor of the coast city Slupsk.

Earlier this year, Biedron announced his own national political party – Wiosna. With the recent elections for the European Parliament they got three seats. Biedron also proposed a plan to ensure LGBTQ equality on an national level in Poland earlier this year.

Rémy Bonny is a Dutch political scientist. He specializes in LGBT+ politics in Central & Eastern Europe and post-Soviet Republics. You can follow him on Twitter or Instagram.