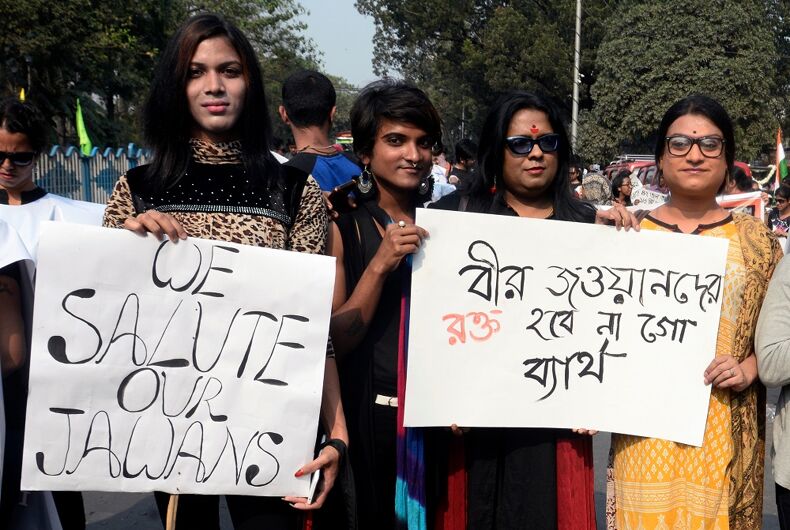 A transgender woman was stoned to death in India.

According to EastMojo, a mob stoned a transgender woman to death in the Jalpaiguri district of West Bengal.

The victim was traveling from town to town in order to beg for money. When she passed through the town of Nagrakata, she found that people were already alarmed at the possible presence of a child kidnapper in their midst.

Several children had already been abducted, according to local sources. The town formed a vigilante gang to question people that weren’t from the town that they found in the area.

Related: Nuns in India have started a school for transgender dropouts

When the mob questioned the victim, someone from behind her shouted that she was the kidnapper and people started hitting her. She tried to run away, and they started throwing stones.

“[She] wasn’t just beaten to death,” said a witness who didn’t want to be named. “[Her] body was mutilated beyond recovery. Huge stones were thrown at [her] face. Even small children were seen throwing stones. Don’t know from where these people got such guts.”

“We managed to rescue the victim but they died on the way to the hospital,” said police officer Debasish Chakraborty.

“It’s a deadly crime where an innocent has been killed for nothing,” the witness said. “I hope each and every one involved is brought to justice.”

The victim has not been identified.

How did violence against LGBTQ people in Poland get so aggressive suddenly?