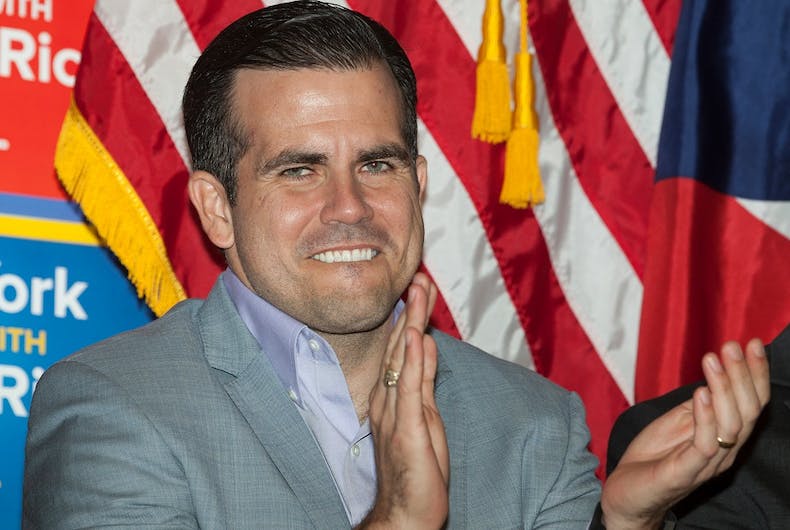 After days of massive protests, Puerto Rico Governor Ricardo Rosselló will resign today despite vowing to remain in office. The protests started after the Center for Investigative Journalism leaked over 800 pages of messages full of profanity and hateful language about gay men, political opponents, and women from a group chat that was administered by Rosselló.

Sources tell CNN that he will resign today after giving a farewell address this afternoon. Just yesterday, in an interview with Fox News, Rosselló vowed to remain in office.

Out pop singer Ricky Martin was among the celebrities joining thousands of protestors who effectively shut down the island for days. Martin was targeted in the chat by Puerto Rico’s chief financial officer Christian Sobrino who accused Martin of being sexist because he’s gay.

Many of the messages targeted Puerto Rico senator Eduardo Bhatia. A publicist posted a picture of Bhatia and another person responded with “20 years and 200 pounds ago.”

Another publicist posted a picture of a woman with a T-shirt that said, “Antipatriarchy, Feminist, Lesbian, Trans, Caribbean, Latin American.”

“That must be some type of record, isn’t it?” Rosselló responded.

In another message, Sobrino wrote, “I’m dying to shoot her up,” referring to San Juan Mayor Carmen Yulín Cruz.

Sobrino resigned this past Saturday, as well as secretary of state Luis G. Rivera Marín, for their part in the leaked messages.