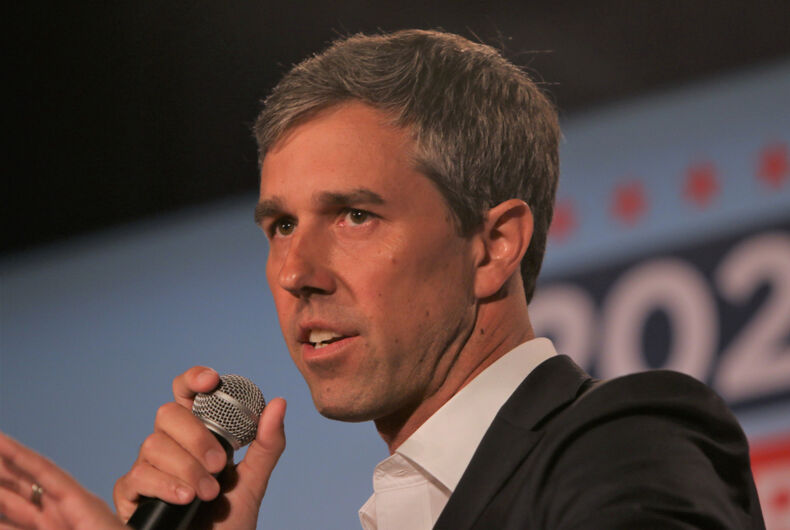 “Together, we can push past the small and divisive politics that we see in Texas today — and get back to the big, bold vision that used to define Texas,” he tweeted earlier today with a video announcing his gubernatorial run. “A Texas big enough for all of us.”

The video focuses on Texas’s electrical grid and the winter storm earlier this year that left much of the state without power or heating.

“When the electricity grid failed – and those in power failed all of us – it was the people of Texas who were willing to put their differences behind them and get to work doing the job at hand,” O’Rourke said. “We did this out of a sense of duty and responsibility to one another.”

“Now imagine if the governor of Texas felt that same way.”

Together, we can push past the small and divisive politics that we see in Texas today — and get back to the big, bold vision that used to define Texas. A Texas big enough for all of us.

O’Rourke served in the U.S. House from 2013 to 2019 and then left the House to run for Senate, almost beating Sen. Ted Cruz (R) and getting national attention for being the Democrat to get the most votes in a midterm election ever in Texas.

He then ran for president, but suspended his campaign before the primaries and endorsed President Joe Biden.

Throughout his career, he has been a supporter of LGBTQ rights, getting scores of 100 for two congressional sessions on HRC’s Congressional Scorecard and 85 in another.

He called marriage equality a “core civil rights issue” in 2013, before it was legal in his state. His presidential campaign released a “sweeping” LGBTQ rights plan that included passing the Equality Act, repealing religious exemptions created by the Trump administration, and making it easier for LGBTQ refugees to come to the U.S.

And he called for anti-LGBTQ religious colleges and other non-profits to lose their tax-exempt status if they discriminate when he ran for president, saying: “There can be no reward, no benefit, no tax break for anyone, or any institution, any organization in America, that denies the full human rights and the full civil rights of every single one of us.”

The current governor of Texas, Greg Abbott, has a very different record. He has pushed the state legislature to pass laws attacking transgender people, first to exclude them from public restrooms and then to ban trans kids from participating in school sports.

Abbott got the state’s Department of Family and Protective Services to say that teachers could face jail time if they don’t report students they have “cause to believe” had gender-affirming surgery, something that doesn’t happen but that “opens the door to any parent of a trans kid being accused of child abuse,” a Democratic lawmaker said.

When the Supreme Court legalized marriage equality in his state in 2015, Abbott said, “Marriage is only the union of one man and one woman,” accused the Court of having “abandoned its role as an impartial judicial arbiter,” and said that he would direct state agencies to “prioritize the protection of Texans religious liberties” over LGBTQ people’s rights.

He has also been waging a war on the Lone Star State’s more progressive cities, banning cities from “discriminating” against anti-LGBTQ companies that claim to be religious with his “Save Chick-fil-A” bill and surrounding himself with food from the chain known for its anti-LGBTQ donations as he signed he bill.

And even as signs pointed to an increase in the trans youth suicide rate in his state due to the multiple attacks on trans youth this year in the Texas legislature, the Abbott administration removed information about an LGBTQ suicide hotline from a state website shortly after his primary opponent said it was “offensive to see Greg Abbott use our tax dollars to advocate for transgender ideology.”

O’Rourke faces an uphill battle. Texas leans red, and Donald Trump won the state by six percentage points over President Joe Biden in 2020. Abbott also reportedly has $55 million in campaign funds already, having won his first two campaigns for governor in 2014 and 2018. And O’Rourke is nine points behind in a head-to-head poll conducted last month.

But O’Rourke appears to believe that Abbott’s handling of the COVID-19 pandemic – which led to a drop in his approval rating – could be a way to win the election.

“68,000 Texans have died from COVID on Abbott’s watch,” O’Rourke said last month. “More will die as he prevents employers from protecting customers and employees. Abbott is killing the people of Texas.”