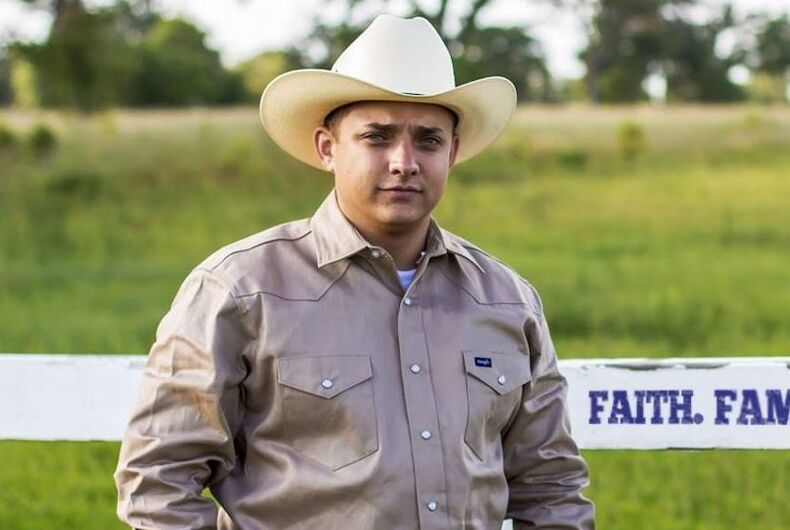 Briscoe Cain, a Republican Texas state representative with a history of transphobia, threatened to shoot Democratic presidential candidate Beto O’Rourke this week after a televised Democratic primary debate in which O’Rourke mentioned his desire to confiscate military-grade assault weapons from civilians nationwide.

In the debate, O’Rourke said:

[I am advocating for a confiscation of assault weapons nationwide] if it’s a weapon that’s designed to kill people on a battlefield. If the high impact, high velocity round when it hits your body shreds everything inside of your body because it was designed to do that so that you’ll bleed to death on a battle field and not be able to get up and kill one of our soldiers, when we see that being used against children, and in Odessa I met the mother of a 15-year-old girl who was shot by an AR-15, and that mother watched her bleed to death over the course of an hour because so many other people were shot by that AR-15 in Odessa, in Midland that there weren’t enough ambulances to get to them in time — hell yes, we’re going to take your AR-15, your AK-47, we’re not going to allow it to be used against fellow Americans any more.

Afterwards, Cain tweeted the following message, “My AR is ready for you Robert Francis,” a reference to O’Rourke’s birth name. (Beto is his Latinx-sounding nickname derived from his days in El Paso.) Twitter removed Cain’s tweet for violating its policy against “violent threats.”

O’Rourke responded by sharing a screenshot of Cain’s tweet and writing, “This is a death threat, Representative. Clearly, you shouldn’t own an AR-15 — and neither should anyone else.” O’Rourke’s campaign also reported Cain’s tweet to the FBI.

This is a death threat, Representative. Clearly, you shouldn't own an AR-15—and neither should anyone else. pic.twitter.com/jsiZmwjMDs

Cain has a history of rabid anti-abortion rhetoric and supporting transphobic legislation including drafting a bill that would’ve prevented transgender prisoners from receiving any transition-related medical care while incarcerated, something that increase their likelihood to experience gender dysphoria, mental anguish, self-harm and greater harassment from others.

The Gaily Grind points out that during Cain’s Republican primary campaign to enter the Texas legislature in 2016, an opponent accused him of being gay. Cain is now married to a woman and has a few children.

But near the end of the campaign, Briscoe’s opponent sent a mail piece with pictures of Briscoe when he was living a different lifestyle. pic.twitter.com/WCagErKeYr

Trans woman so badly burned that police couldn’t identify her

Pete Buttigieg did well in the presidential debate, but was it enough?