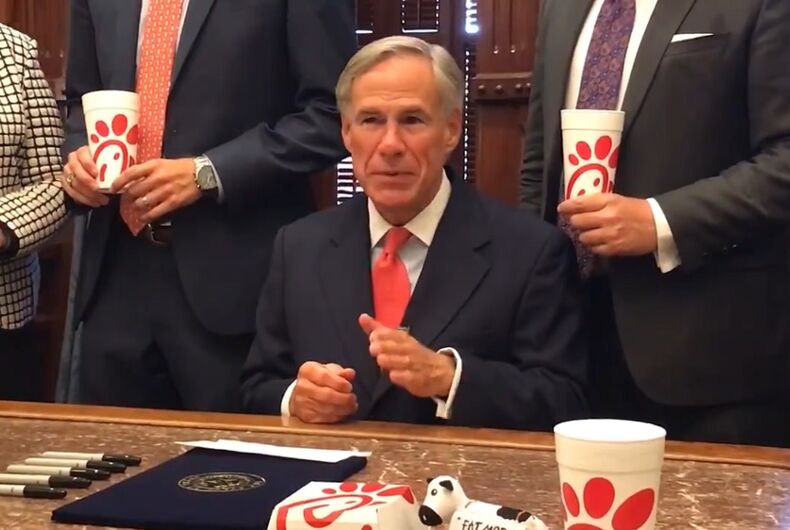 The Texas Department of Family and Protective Services (DFPS) quietly removed information intended to help prevent LGBTQ youth suicide from one of its websites after Gov. Greg Abbott (R) was criticized by a primary opponent for “promoting transgender sexual policies to Texas youth.”

The site for Texas Youth Connection, part of DFPS, used to have a page called “Gender Identity and Sexual Orientation” that had links to various LGBTQ youth resources, including a suicide prevention hotline and educational materials.

In August, Don Huffines, who is challenging Abbott in the Republican primary, criticized the site in a video posted to Twitter.

“Governor Abbott’s political appointees that are running the Department of Family and Protective Services have put out and has been on their website some very disturbing information,” Huffines said in the video. “They are promoting transgender sexual policies to our- to Texas youth!”

He read out what each of the letters in LGBTQ means and said: “This is Texas! These are not Texas values. These are not Republican Party values. But these are obviously Greg Abbott’s values.”

“It’s offensive to see Greg Abbott use our tax dollars to advocate for transgender ideology,” he tweeted.

It’s offensive to see @GregAbbott_TX use our tax dollars to advocate for transgender ideology. This must end. #txlege pic.twitter.com/gQiAEJZ8YR

“FYI. This is starting to blow up on Twitter,” she wrote.

Crimmins then emailed the DFPS’s website director and told him: “Please note we may need to take that page down, or somehow revise content.”

Despite the fact that the site was providing information that could save lives, it was taken down to advance Abbott’s political career and replaced with a message that said that it “has been temporarily disabled for a comprehensive review of its content.” Now the page is completely offline.

“The state is responsible for these kids’ lives, yet it intentionally removed a way for them to find help when they need it the most,” said Ricardo Martinez of Equality Texas. “This action is unconscionable, and it reminds us that political aspirations are part of every attack on LGBTQ+ kids in Texas.”

“These precious kids deserve so much better than the way this state is treating them.”

LGBTQ youth have a high rate of suicide and attempted suicide than their cishet counterparts. The Trevor Project, which runs the LGBTQ youth suicide hotline that used to be linked on the Texas website, reported a 150% increase in calls from transgender youth in Texas since the state legislature started trying to pass laws attacking transgender youth this year.

Huffines has been pushing Abbott to the right on several issues, including LGBTQ rights. He asked Abbott to put a law to ban gender-affirming health care for transgender youth on the agenda for a special session of the state legislature this past summer.

Abbott didn’t, but he did ask DFPS Commissioner Jaime Masters to declare that gender affirming surgery is child abuse when performed on children, even though that surgery isn’t performed on minors.

Masters also said that teachers and other mandatory reporters in the state have to report any child they have “cause to believe” underwent such surgery under the threat of jail time.