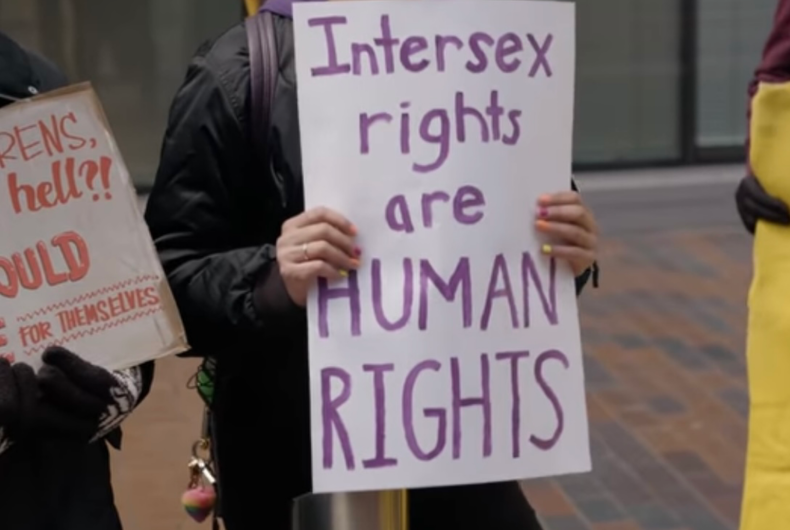 A protestor holding a sign, advocating for intersex rights outside a hospital in Chicago in 2019.Photo: Screenshot/YouTube

For months, a conservative-backed wave of anti-transgender legislation has taken the country by storm, leading this year to have the most anti-LGBTQ laws enacted in American history.

And the laws are likely to have a negative effect on intersex people just as they are on trans and gender non-conforming people — but for a different reason.

Intersex people and advocates are trying to stop widely accepted medical surgeries where babies and children’s intersex characteristics are altered to conform them to a sex assigned to them at birth. Such permanent procedures might not conform with the child’s gender identity or desire for their own body, and they are condemned by the U.N.

But anti-trans advocates are seeking to further encourage such “corrections.”

The word “intersex” refers to people who are born with sexual characteristics that don’t fit societal or medical norms for male or female bodies. Many of these traits are visible at birth, some may not become visible until puberty, but some variations may not even be visible in adulthood without testing.

Most of those characteristics are categorized as differences in sex development (DSD) disorders, although the term intersex is often used as an umbrella term to categorize anyone who doesn’t conform to gendered body norms, sometimes inaccurately.

This is most prevalent in descriptions of athletes with naturally-occurring hormones that differentiate them from other athletes they compete with.

As much as 1.7% of the world’s population is born intersex.  They are often included within the transgender community, but intersex people can also be of a wide range of sexual orientations or gender identities.

Intersex activist Alicia Roth Weigel, an intersex person herself, is living in Texas, which has proposed the most anti-trans bills in the nation. Although most have not passed, conservatives in Texas have continued to repeatedly try, and they’ve also enacted legislation that limits the medical care that women and pregnant people, some of them intersex, can access.

Just like trans youth, their parents, and LGBTQ groups, Weigel has been objecting all year to the largely Republican-led proposals to ban gender-affirming care for trans youth or keep them from playing sports according to their gender identity.

Legislation can be complicated but shoes are simple.

Sandals or boots, we all show up differently… But the important thing is that we have a choice in the matter. pic.twitter.com/O8FDC8Eg2f

While anti-trans politicians claim such laws are attempting to stop such medical interventions with children’s natural development, the bills explicitly allow for them to continue when it comes to intersex youth.

Texas Republicans have proposed several bills to prevent trans youth from receiving gender-affirming care, and they all provide an exemption for doctors who want to operate on intersex youth.

If a child “born with a medically verifiable genetic disorder of sex development” does not have “the normal sex chromosome structure for male or female as determined by a physician through genetic testing,” doctors can perform gender-conforming surgeries on them.

“It talks about performing surgeries that sterilize a child, including castration, vasectomy, hysterectomy, oophorectomy, orchiectomy, and vaginoplasty… All of these are surgeries that are happening on intersex children, they’re not happening on trans children,” Weigel told the publication them.

These surgeries are often referred to as necessary “correction” procedures, but intersex advocates refer to them as interventions — procedures that are unnecessary, invasive, and stripping intersex people of their autonomy and their rights.

While anti-trans advocates push to take non-surgical healthcare (such as hormone blockers) away from trans youth that they may need, they are also codifying such intervention procedures that intersex rights advocates are trying to prevent.

Texas isn’t alone. Several bills around the country, many of them backed or copied from hate groups, have this same protocol embedded in their laws. One such bill that succeeded, enacted in Arkansas, contained this as well. It is currently blocked by a court pending legal challenges, though.

In April, VICE News documented at least 16 instances where this exception is allowed. Texas alone has had multiple special sessions with several similar anti-trans proposals introduced since then.

Weigel, who works with the intersex youth rights organization interACT, has testified and protested these bills in Texas and beyond.

“The interesting thing is when you read the text [of these bills], the word ‘intersex’ is not mentioned once in the language of the bill. However, the vast majority of the bill is about intersex people,” Weigel notes.

“I’m so glad that there are so many groups and so many people shouting out to fight for trans kids. But I haven’t heard a peep about the intersex kids that are also always caught in these types of legislation,” Hans Lindahl, the former director of communications at interACT, told them as well.

A lack of education and understanding of intersex people is one of the biggest barriers to the community, many activists note. InterACT and other organizations such as the Intersex Justice Project, Intersex Human Rights Australia, and Human Rights Watch currently bring awareness to issues affecting intersex people.

Over the last few years, intersex people have continued to gain more rights and protections, some of the same that other parts of the trans and gender non-conforming community are fighting for as well.

In 2016, New York City issued the first known birth certificate that accurately identified someone as being born intersex, as opposed to categorizing them as male or female. Colorado became the first state to issue intersex birth certificates in 2018. The country Germany began to do so in 2018 as well.

Other states have since made similar changes to allow gender-neutral or third gender markers to be issued on birth certificates and IDs, which similarly offer a path for intersex people to obtain government documents that more closely reflects their identity.

Earlier this year, the Biden administration began the process to allow the government to issue gender-neutral markers on federal-issued identification and documents, in part because of protesting and legal challenges from intersex people.

An intersex Navy veteran, Dana Zzymm, sued the government for years so their passport could accurately represent their identity. Initially, the U.S. Department of State said they would only list Zzyym’s gender as “female” or as “male” if a doctor issued a letter confirming Zzyym’s “new gender,” but not anything else.

Courts ordered the State Department to issue Zzyym a passport accurately representing their identity in 2019. Zzyym still had not received one as of February 2021, more than five years since Zzymm’s legal battle began.

In June, a new Pride flag was created to explicitly include colors and symbols from the intersex flag, as a way to increase intersex visibility.

The Intersex Justice Project also shared a thread of tweets discussing the need to protect the rights of intersex youth in June.

Here are some things YOU CAN DO to protect intersex youth!
1. Get educated! There are a growing number of intersex and people with intersex variations who are educating in these streets! Some activists may identify as intersex, others may not. Follow them!

3. Since the United States is such an overreaching colonialist and imperialist power, those of us in the United States need to challenge the medical authority here! Support @interACT_adv and other activists fighting for change across the U.S. pic.twitter.com/X9uOC5fhhx

In July, a protest was held outside of Weill Cornell Hospital in New York City, calling for a doctor there known for performing and advocating for corrective procedures and the New York-Presbyterian Hospital group as a whole to stop allowing them.

The New York City Health + Hospitals system has already made a similar pledge.

Was proud to stand with @IntersexJustice in the fight to #EndIntersexSurgery. Thank you to the incredible organizers for leading this charge. #intersexjustice pic.twitter.com/5faqQl12Sp

Private hospitals such as @WeillCornell need to stop allowing these surgeries on children.

No one should have their bodily autonomy stripped from them. #EndIntersexSurgery pic.twitter.com/n4bNJjwmZK

Other advocates have worked to bring intersex issues to the forefront.

Intersex people are finally starting to get the awareness they deserve thanks to tremendous work from outspoken community leaders like @SeanSaifaWall. Saifa works to combat the social stigmas that pressure intersex people to conform to the male/female binary. #PrideIsPower #Pride pic.twitter.com/AdDyOehpnq

Topic 1: Why are we still performing cosmetic genital surgeries on non-consenting children? #EndIntersexSurgery

But I see y'all STILL aren't ready to have this discussion.

#Intersex #YouthLead us into a fearless future where no one is forced into harmful treatment or surgery because their body looks different. Together we can end stereotypes about bodies and make that future a reality! #IntersexAwareness @UNYouthEnvoy

Still, when it comes to receiving healthcare, intersex people have very little protections to rely on, from birth or beyond. There are a growing number of resources and advocates, however.

In 2018, Lambda Legal, InterACT and Proskauer Rose LLP released an inclusive guide for medical providers, outlining how to “Providing Ethical and Compassionate Health Care to Intersex Patients,” as the document was titled.

In May 2020, InterACT issued a guide for those “Seeking Medical Care as an Intersex Person.”

Since a children’s hospital in Chicago being the first hospital ever to explicitly stop conducting interventive procedures on children born with intersex characteristics in July 2020, only a handful of others have made the same pledge.

Otherwise, it is legal and commonplace all across the world, despite the fact that the United Nations has condemned it and considered it a human rights violation since 2015.

Lawmakers in California, including out state Sen. Scott Wiener (D), have tried to outlaw it for several years, but it has yet to make it through the legislature. Four other states have considered similar laws.