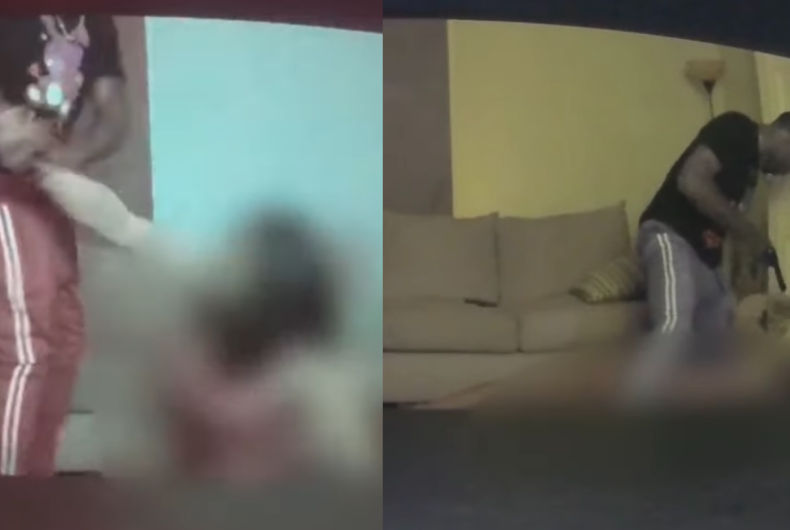 The officer (blurred) being held at gunpoint and beaten by the robber.Photo: Screenshot/Fox 5 Atlanta

A federal corrections officer was held at gunpoint, robbed, and brutally beaten by a man that he welcomed into his home after they met earlier in the evening. The officer, who revealed the incident anonymously to the media, was dressed in feminine attire at the time.

The officer spoke anonymously with Fox 5 Atlanta, sharing security camera footage of the harrowing encounter from inside his home.

The events occurred in the early morning hours of Sunday, August 29, with the encounter between the officer and the eventual robber starting on Peachtree Road, which runs from downtown to north Atlanta.

“I drove down Peachtree and he was walking down Peachtree. He flagged me down and I pulled over,” the officer recalled. “I thought I knew him, but I didn’t. Then we got into conversation.”

The officer and the eventual robber returned to the officer’s home, where the robber excused himself to go into the bathroom, but then came out with a gun pointed at the officer’s head.

“He came out the bathroom and put the gun to my face and told me to get on the ground,” said the officer.

That’s when he decided to follow his instincts and training and fight back. “As I was going to the ground we tussled but then he slung the gun away from me and started hitting me with it,” he said.

So he got up and made a run for it. “I ran towards the door and opened the door. He followed me out,” said the officer, but as he was seeking his neighbors’ assistance, the robber went back into the officer’s home and locked him out.

He then took off with the officer’s pitbull puppy and escaped before he could be captured.

“The dumbest thing you can do is assault anybody but then to assault a federal correctional officer,” the officer told Fox 5. “I wish nothing but bad for you. Nothing but bad, and you will get it.”

He said he shared his story because he feared the man might target others in the LGBTQ community within Atlanta.

“I don’t think it was his first time at all. I think he is going to do it again,” the officer said.

He added, “I just hope he’s not dumb enough to do it here again because now I’m ready for him.”

The officer was left with four facial fractures as well as seven stitches.

The Atlanta Police Department said the robber was last seen carrying the dog in a pink and black duffle bag as he left the officer’s apartment complex. In the footage, he is seen wearing red Adidas tracksuit pants and a Black shirt.

Several LGBTQ people have been victims of crimes in the area as of late, including five shot after attending Black Pride in the city over Labor Day weekend.

Since December 2020, several trans women have been murdered or faced a violent death within the state of Georgia: the deaths of Kimberly Patricia Cope in December, Bonaire “Bonnie” Black this past New Year’s Eve, Bianca ‘Muffin’ Bankz in January, and Sophie Vasquez and Serenity Hollis in May, have all happened in the Peach State.

In July, Katherine Janness was found dead with her dog in Atlanta’s Piedmont Park, leaving behind her fiancee, Emma Clark.

The officer’s story has been reshared and sensationalized on social media, with an Instagram “scoop” page sharing the story and receiving attention from celebrities such as Real Housewives of Atlanta‘s Kandi Burruss.

The Atlanta Police Department is requesting any information that may help them capture the robber. Anyone that sees him or Buddy, the puppy, is asked to call 911, and anyone with any info can contact Crime Stoppers Atlanta at 404-577-TIPS (8477).