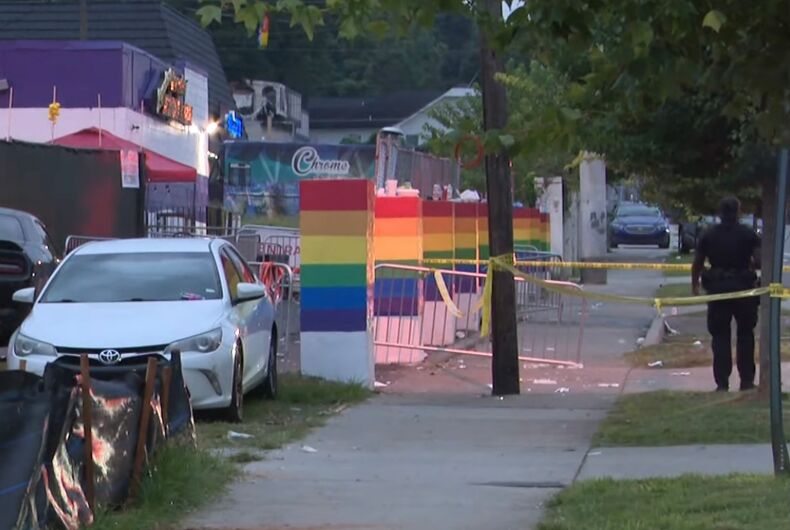 The area outside of the Marquette Lounge was taped off as a crime scene by Atlanta PolicePhoto: Screenshot/11Alive

Reports of gunfire were made early on Labor Day, just following an Atlanta Black Pride event was hosted at the Marquette Lounge in northwest Atlanta which was headlined with an appearance by rapper Lil’ Kim.

The Marquette Lounge insists that no event took place on their premises that precipitated the shooting, but crime scene investigation and footage circulating online purportedly documents the shooting happening in a parking lot right outside the establishment.

Online video shows a fight breaking out, with one person falling to the ground before a group runs off — right before gunshots are heard.

Shots were fired after a fight yesterday during Black Pride Weekend outside the Marquette Lounge in #Atlanta. Rapper Lil Kim was performing at the club. Five people were injured. No suspects were arrested. pic.twitter.com/zcGHYCE9De

The event was a block party “finale” for Atlanta Black Pride festivities, celebrated annually in Atlanta on Labor Day weekend.

This year marks the 25th anniversary of the annual celebration and most festivities were being held for the first time since the pandemic.

The shooting was reported just after the event’s scheduled ending time, 6 a.m.

ATL ❗️ I’m Outside ❗️Where y’all at? I’m poppin’ out all weekend!!! Pull up to Marquette Lounge on Sunday 9/5!!! pic.twitter.com/pY9franOQI

“Following the shooting, patrons ran across the street to Proctor Street, where they contacted 911. The suspected shooter fled the scene before officers arrived,” the Atlanta Police Department (APD) said in a statement to the Atlanta Journal-Constitution.

Five people were reported to be shot but police say their injuries are all non-life threatening, 11Alive reports.

“Somebody got in a fight, and they maced somebody and we all had to run,” said witness Joseph Downer, “It was very scary.”

.@Atlanta_Police confirm 5 people were shot at the Marquette Lounge. https://t.co/Q4L3Vuwo5E

BREAKING: APD investigating a shooting in NW Atlanta. Witnesses told me a fight broke out outside of Marquette Lounge & a man start shooting in the air & then into the crowd. We’re working to confirm how many people were injured & arrested. Stay with @wsbtv for updates. pic.twitter.com/NLGuyK3ZCt

In a statement, the Lounge said they are fully cooperating, but they suggest the events leading to the shooting had nothing to do with the event.

“Our premises were fully secured at the time and to our knowledge, no major occurrence happened that would warrant the shooting that took place across the street,” Marquette Lounge said in a statement. “We are limited in the level of control we have in situations that do not occur on our property. We have reached out to the Atlanta Police Department and are fully cooperating with the ongoing investigation.”

While witnesses said that the night “went left” right when the event ended, the Lounge insists that the shooting was unrelated to the festivities.

“People are known to congregate in the park because it is close to our establishment but the location where the incident happened is a separate entity,” the Lounge said. “Because this is an active investigation, we cannot comment further at this time.”

The shooting has initiated a swift response of backlash in Atlanta, with one patron telling WSB that they’ll never return to the city, and leading City Councilmember Michael Bond announcing he’ll introduce legislation to hold businesses with liquor licenses responsible for what happens outside their premises after gatherings.

No arrests have been made and APD has not announced if they have any suspects.