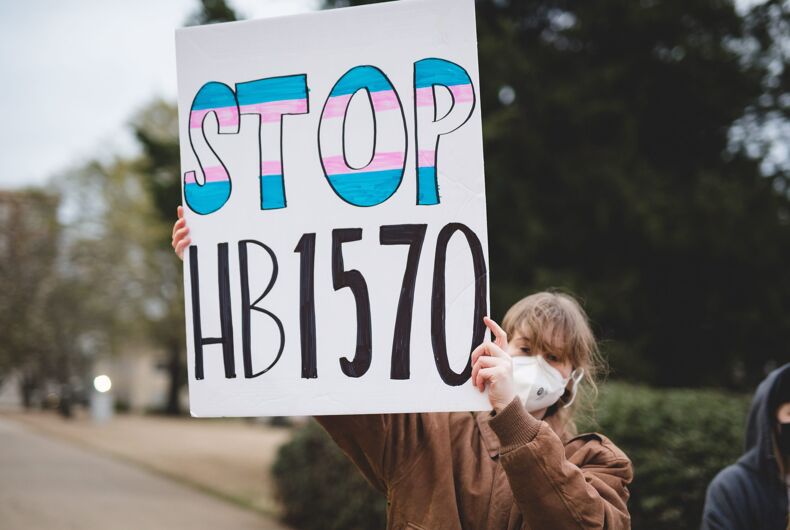 A federal judge issued an injunction today against Arkansas’s new law that bans doctors from providing gender-affirming health care to transgender youth, meaning that the ban will not go into effect on July 28 as planned.

U.S. District Judge Jay Moody in Little Rock said that the state is likely to lose the lawsuit to overturn the health care ban and that the law targets transgender people, according to ACLU attorney Chase Strangio, and therefore will be less likely to survive legal challenges.

This past March, Arkansas’s legislature overrode the governor’s veto to pass H.B. 1570, which bans doctors for providing gender-affirming care for transgender youth, including puberty blockers, which are not effective if taken as an adult because puberty has already permanently changed a person’s body at that point.

In May, the ACLU filed a federal lawsuit on behalf of several plaintiffs who include transgender young people, their families, and medical professionals who work with trans youth, saying that the law violates trans people’s constitutional rights to due process and equal protection and doctor’s First Amendment rights because it even bans doctors from referring patients for care.

“This is who I am, and it’s frustrating to know that a place I’ve lived all my life is treating me like they don’t want me here,” said Dylan Brandt in a statement. He’s 15 and he and his mother Joanna are plaintiffs in Brandt v. Rutledge.

“Having access to care means I’m able to be myself, and be healthier and more confident — physically and mentally. The thought of having that wrenched away and going back to how I was before is devastating.”

The ACLU argues that the law targets trans people, a historically oppressed minority, in part because the treatments it bans for trans youth aren’t banned for cis youth. For example, the medications used as puberty blockers are more commonly used to treat precocious puberty and idiopathic short stature in cis youth as well as prostate cancer and endometriosis in adults, but the law only bans them from being used to help trans youth.

The injunction is a temporary measure that stops the law from going into effect as the legal challenge works its way through the courts, and it’s a positive sign for the lawsuit’s chances.

The judge agreed that the law targets trans people, despite arguments from the state that the ban is “a child-protection measure” that doesn’t discriminate against trans youth because it bans both cis and trans young people from transitioning. The argument is similar to the argument that marriage equality bans don’t discriminate because gay people can still marry the opposite sex, and Judge Moody appears not to have been impressed with this latest permutation of the argument.

“Our clients Dylan, Brooke, Sabrina and Paxton know who they are,” the ACLU tweeted in announcing the injunction. “Trans youth shouldn’t have to fight this hard to access live-saving care.”

“We will continue to fight alongside trans youth, their parents, and their doctors to permanently end this ban.”

Our clients Dylan, Brooke, Sabrina and Paxton know who they are. Trans youth shouldn’t have to fight this hard to access live-saving care.

We will continue to fight alongside trans youth, their parents, and their doctors to permanently end this ban.