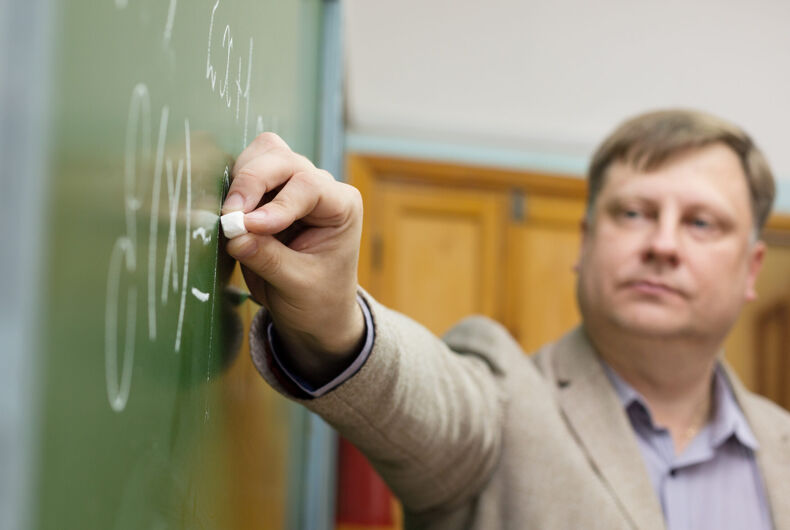 The Virginia Supreme Court has upheld a lower court’s decision reinstating Tanner Cross as a teacher after he was initially fired for refusing to use a trans child’s proper pronouns and name.

During a discussion about a potential change to school policy, Cross told officials that respecting his student’s chosen pronouns and name would be impossible due to his religious beliefs, saying it amounted to “child abuse” and “sinning.”

Related: A QAnon supporter and anti-LGBTQ hate group member wants to be Maryland’s next governor

On May 25, Cross gave testimony before the Loudoun County Public Schools board as they considered a policy change that would require instructors to use the students’ chosen names and pronouns. The physical education teacher at Leesburg Elementary School said that he could never “affirm that a biological boy can be a girl, and vice versa.”

Two days later, Cross was placed on administrative leave and barred from the grounds of Leesburg Elementary School, any school activities, and school board meetings. Cross then said his “freedom of speech” was being violated and filed a lawsuit against Loudoun County.

“Mr. Cross used his constitutional right to speak up,” the suit stated. “The core of constitutional liberty in a free society — the ability to comment on public policy under consideration without fear of retaliation — is at stake in this case.”

Cross’s attorney argued that his objections were protected under free speech laws and in June, Judge James E. Plowman Jr. gave weight to the argument by granting an injunction that reversed his administrative leave and prevents the school system from being able to fire him.

While lawyers for the school said they suspended him after multiple calls from concerned parents, the court said they didn’t prove there would be a “significant disruption” of school functions if Cross was still allowed to teach. Loudoun County challenged the injunction with an appeal.

The appeal reached the Virginia Supreme Court, and on August 30 the court ruled in Cross’s favor, upholding the decision. That means he can return to class as a new school year begins and his lawsuit continues.

Earlier this month, Loudoun County implemented a policy expecting staff to affirm trans students and “allow gender-expansive or transgender students to use their chosen name and gender pronouns that reflect their gender identity.”

Loudoun County has declined to comment and it’s not clear if they will try to appeal further on the matter. His lawsuit against his employer will continue in court.

Cross celebrated the news with an appearance on Fox News, gushing about his warm return to school this week.

Tanner Cross didn't just object to a policy asking him to respect the pronouns of his students. He said that his personal beliefs come before school policy. There's absolutely nothing courageous about a grown male gym teacher vowing to bully the eight-year-olds in his care. pic.twitter.com/Oa0b0V9GOi

Cross has thus far received legal representation from the Alliance Defending Freedom (ADF), a far-right outfit that serves as the legal arm of the Evangelical religious right.

ADF is also responsible for this year’s spate of lawsuits targeting anti-discrimination legislation, filing on behalf of Christian business owners who haven’t even been asked to serve LGBTQ customers but claiming that their religious freedom is impeded by the mere existence of civil rights laws.

Cemetery to fans of Divine: “Please be respectful” of others