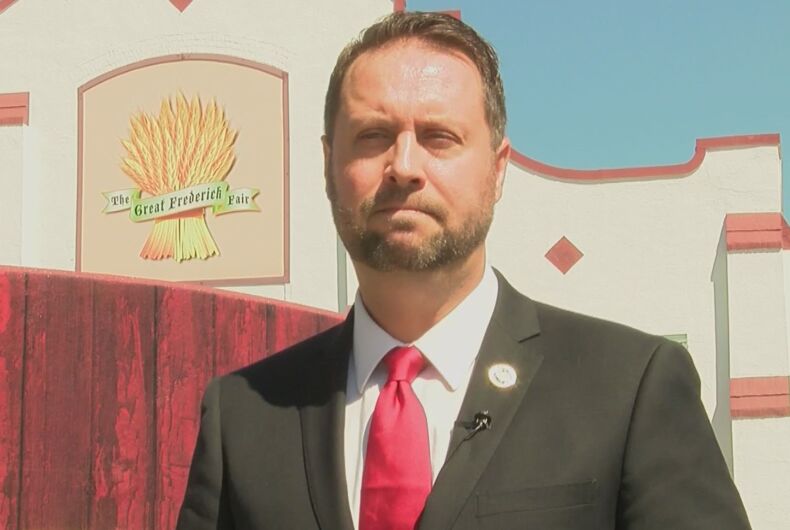 He was also a former member of Alliance Defending Freedom (ADF), a conservative legal organization deemed as an anti-LGBTQ hate group by the Southern Poverty Law Center.

Cox, a 46-year-old freshman state delegate, is now one of three Republicans who have announced their candidacy for the governorship since the state’s current Republican Governor Larry Hogan can’t run for re-election due to term limits. Nine Democrats have also announced their intentions to run for the office.

Cox, however, stands out as a particularly far-right candidate. He has opposed statewide mask mandates meant to reduce the spread of the ongoing COVID-19 pandemic. He also organized three buses to transport Trump supporters to his January 6 “Stop the Steal” rally which later turned into an attempted coup on the U.S. Capitol that injured over 112 police officers.

During the rally, Cox called Trump’s Vice President Mike Pence a “traitor” (because he wouldn’t help Trump overturn the election). Cox also voiced support for the leader of the far-right organization the Proud Boys. He later claimed that Antifa (anti-fascist) protesters were behind the January 6 coup, even though the FBI has said the claim is completely baseless.

His support of overriding Black votes to keep a rabidly anti-LGBTQ president in power is just the tip of his far-right iceberg.

He also believes in QAnon, a conspiracy theory that the FBI has deemed a domestic terrorist threat. Its believers think that a shadowy international child-trafficking ring — run by Satan-worshipping Democrats, Hollywood elites and lizard-humanoids — sexually abuse and torture kids in order to extract an allegedly psychedelic, youth-rejuvenating chemical called adrenochrome from their victims’ pituitary glands. (Adrenochrome does not actually have any psychedelic or youth-rejuvenating effects.)

QAnon has been linked to death threats against LGBTQ politicians and their allies, a 2016 shooting at a Comet Ping Pong, a gay-owned, Washington D.C. pizzeria. QAnon believers have not partnered up with international organizations that actually work to prevent child trafficking.

Lastly, ADF is a legal group that is behind many of the contemporary challenges to LGBTQ civil rights, including granting bathroom and sports access to transgender students as well as claiming that antidiscrimination protections violate religious freedoms.

Politicians like Cox have become increasingly common in the Republican party. His election would spell bad news for queer people inside his state and across the nation.

Pride in Pictures: Raising my son to be open-minded