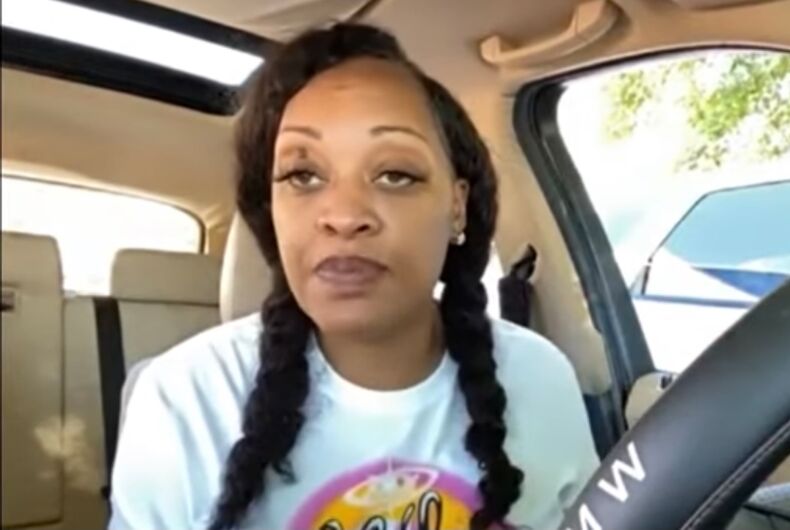 The owner and performers that work at the Palace Bar and Restaurant in South Beach, Miami, are facing a stream of attacks and threats online after a video of drag performers dancing with children was recorded by an anti-LGBTQ activist and quickly went viral.

Angela Stanton-King went to the venue last month and accused them of exploiting and sexualizing children. That led to the likes of Rep. Marjorie Taylor Greene (R-GA) and other anti-trans activists to begin harassing the venue, and it hasn’t stopped yet.

Owner Thomas Donall told Local10 News that one user told them on Instagram, “I hope y’all end up like Pulse,” referencing the massacre of 49 people in the Pulse Nightclub, a gay venue in Orlando, in 2016.

Stanton-King is a failed Republican candidate for Congress in Georgia and the goddaughter of Alveda King, the anti-LGBTQ and rightwing niece of the Rev. Martin Luther King Jr. In 2004, the Trump-supporting QAnon conspiracy theorist was convicted in federal court on charges related to her part in a car theft ring and served six months in home confinement. Before leaving office, Donald Trump pardoned her.

Although Stanton-King’s made a name for herself attacking LGBTQ people in the past, including rejecting her own trans child, she claims she’s not anti-LGBTQ.

She further claims that she only went to the gay venue in April because it “looked like a place that would be fun and entertaining.” But when she saw that children were also at the “fun and entertaining” show, dancing with the performers and posing on stage, she had to “save” them from the “sexual exploitation” they were supposedly facing.

“These people have children in a [expletive] drag show, I feel offended and disrespected by being a survivor of sexual abuse!” Stanton-King said in one of the videos posted to her Instagram.

Stanton-King talked to Donall on-camera that night and Donall explained that the children were there, being supervised with their parents, and weren’t featured participants or scheduled acts in the show. Stanton-King still posted the footage, complaining in several posts for the next two days that the club was trying to exploit children.

Her footage went viral and made its way onto right-wing media, and was then posted on Twitter by Rep. Marjorie Taylor Greene (R-GA). She appended the hashtag #SaveTheChildren to a tweet about it, which is a commonly adopted phrase used by QAnon believers, that has anti-LGBTQ origins.

“Someone should be arrested and charged!” Greene declared, sharing the article from Ian Miles Cheong, described as a right-wing “provocateur” who has been criticized for mischaracterizing or spreading misinformation.

The article shared by Cheong and Greene presents an edited version of Stanton-King’s footage, misrepresenting the events as a show in Los Angeles where children were asked to strut for cash. The article also suggested that the emergence of Desmond is Amazing in 2018 is to blame for “the introduction of children to drag shows” making headlines in recent years.

Ever since, Donall and his performers have had to deal with the repercussions of anti-LGBTQ attacks. People have begun calling the city of Miami-Dade government to try to get the club investigated and shut down.

Donall reported that a city official (that he refused to name) tried to persuade him to stop allowing drag performers to perform freely at the club. The Miami-Dade government denied that anyone “had taken any official action against the Palace” or approached the club about the matter.

“It’s really difficult for us and heart-wrenching,” Donall said. “I mean, it just makes me … really sick to my stomach.”

“It was all innocent fun for the girls. I mean they were posing with a Madonna show,” he added.

When pressed on the fact that the children at the show were being supervised, Stanton-King just remarked, “I think some people are bad parents.”