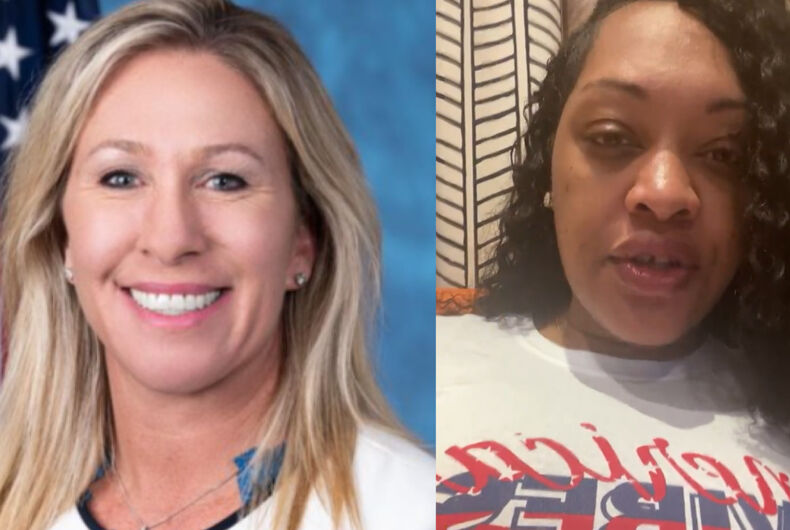 Rep. Marjorie Taylor Greene (R-GA) called for the arrest of a drag queen after sharing a far-right media article that claims to show “children at a drag club in [Los Angeles] being paraded across the stage by a drag queen urging them to pose and strut for cash.”

“Someone should be arrested and charged!” she declared, sharing the article from Ian Miles Cheong, described as a right-wing “provocateur” who has been criticized for mischaracterizing or spreading misinformation.

Greene then appended the hashtag #SaveTheChildren to the tweet, which is a commonly-adopted phrase used by QAnon believers, that has anti-LGBTQ origins.

The article bases its story, “Shocking footage of children on stage at a drag show in Los Angeles,” on a tweet by anti-trans comedian and podcast host Lindsey Platoshyn.

The tweet includes a video that shows a woman complaining about children being out late at night, before the footage switches to a video of a drag performer walking and posing with two children while the woman continues complaining about what’s she’s supposedly watching. The footage’s origin is not detailed, and users online have shared that what the video shows is not accurately described.

The video in fact originates from videos posted on Instagram by Angela Stanton-King, and according to her, the location in question is the Palace club in South Beach, Miami, not Los Angeles. Stanton-King posted a follow up video, talking to the manager of the palace about the issue.

The manager tells her that the children’s parents allowed them to go on-stage and his establishment is “open to everyone.” Stanton-King later held a 40-minute live Instagram discussion talking about the video and “how disgusted I was,” explaining why she’s doing a talk tour and “moving around.”

Stanton-King is also a far-right QAnon conspiracist who was banned from Twitter just last week after continuing to denigrate her own trans daughter publicly. She is a former congressional candidate and criminal who received a pardon from Donald Trump before he left office.

Cheong has been described as a “right-wing troll” and is from Malaysia; he does not live in the United States and according to the Daily Dot has stoked controversies online for years, going as far back as “Gamergate” in the early 2010s.

The article in question is from the Post Millennial, a Canadian-originating conservative website that gain popularity through Facebook in recent years. Buzzfeed News has reported that the site and Facebook page mainly promote stories that support or bring awareness to the Conservative Party of Canada, and the Post Millennial has widely been accused of libel and promoting disinformation. In July 2020, articles written by someone spreading far-right opinions under a false identity were identified on the Post Millennial website.

The Post Millennial is under the leadership of editor-at-large Andy Ngo, who is also described as a gay “right-wing troll” and provocateur because he takes footage from mostly Black Lives Matter protests to report on the supposed “antifa” organization on social media. The rest of the website’s backers and operators are not publicly disclosed.

The article claims that the emergence of Desmond is Amazing in 2018 is to blame for “the introduction of children to drag shows” making headlines in recent years. Greene, meanwhile, has been at the forefront of opposition to LGBTQ equality in Congress.

A bi teacher came out to her students. One student’s email afterwards made the backlash worth it.