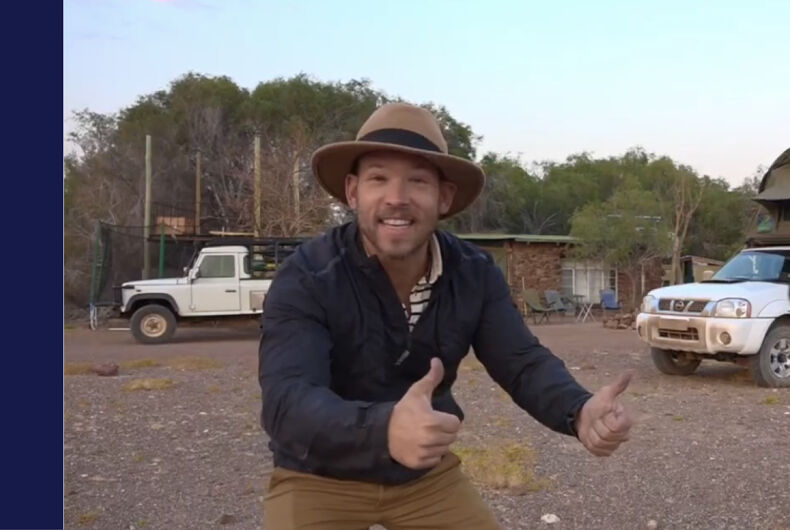 A gay meteorologist who was fired from a local television news station in Minnesota last year is now suing his former employers for targeting him due to his sexual orientation.

Sven Sundgaard worked for KARE-11, the NBC affiliate for the Minneapolis-St. Paul market, for nearly 15 years. During that time, Sundgaard accuses his former managers, co-workers, and the company’s human resources department of making a hostile work environment, defaming him, violating the Minnesota Human Rights Act, and discriminating against him over his sexual orientation and religious beliefs.

He is suing for back pay from the time he was fired — reportedly calculated to about $320,000, covering about two years after his departure — and $25,000 in punitive damages.

Sundgaard was out during a majority of his employment at KARE-11, having come out soon after starting in 2006. His appearance on the cover of Lavender Magazine in 2007, however, upset KARE-11’s news director at the time, Tom Lindner.

“What are people going to think?” Lindner allegedly asked Sundgaard. (He would appear on the cover of Lavender at least two more times.) Sundgaard reported the comments but never received a follow-up from KARE-11’s human resources department, or the parent company, Tegna, which was formed in 2015 as a spin-off of the Gannett Company.

Sundgaard claimed that his managers wanted “to know his whereabouts at all times,” and denied requests for time off such as when he was scheduled to speak at the National Lesbian & Gay Journalists Association (NLGJA) in 2017. He also wasn’t allowed to take off time to spend with his mother while she dealt with cancer, his suit alleges. She eventually passed away.

He called out “mistreatment, double standards and singling out” by the station because they did not want him to speak up about his experiences or his sexuality. Further complaints about these issues led to Tegna issuing a “warning” for insubordinate and unacceptable behavior against Sundgaard.

These and “similar incidents of differential treatment toward” Sundgaard contribute to the pattern that the suit believes is “based, in part, on his sexual orientation and prior reports of discrimination or harassment.

“No matter how many times he reported, the hostility and differential treatment continued.”

In April 2020, Sundgaard shared a post on Facebook where a rabbi referred to anti-mask protests as “white nationalist Nazi sympathizer gun fetishist miscreants.”

Conservative media pounced on the post, highlighting Sundgaard’s apparent beliefs although he did not say those words himself. Former Rep. Jason Lewis (R-MN), running for Senate at the time, shared articles about Sundgaard’s post.

Calling COVID-19 reporting “about as accurate as his forecasts,” Lewis said, “@kare11 should fire him!” So they did.

They announced in a post on Facebook that “due to continued violations of KARE11’s news ethics and other policies, we have made the decision to part ways with Sven Sundgaard.”

Since then, Sundgaard pushed forward and began doing weather forecasts on social media. He eventually joined the online site Bring Me the News.

Now, he’s ready to fight for his reputation and clear his name.

“I’ve been overwhelmed and forever grateful for the outpouring of support I have received over the last year. I hope to continue to receive your support as I embark upon this difficult journey that will highlight the unfair treatment to which I was subjected,” he said in a statement. “While a lawsuit is not ideal for anyone, I believe it is important to take action to prevent what happened to me from happening to others. I do this also, for the countless young people who have thanked me for being an openly gay man, making it easier for them to be true to themselves.

“My late mom always taught me to stick up for myself.”

KARE-11 issued a statement claiming that “one of our core values as a station is inclusion. We are committed to maintaining a respectful workplace free from all forms of discrimination and harassment.”