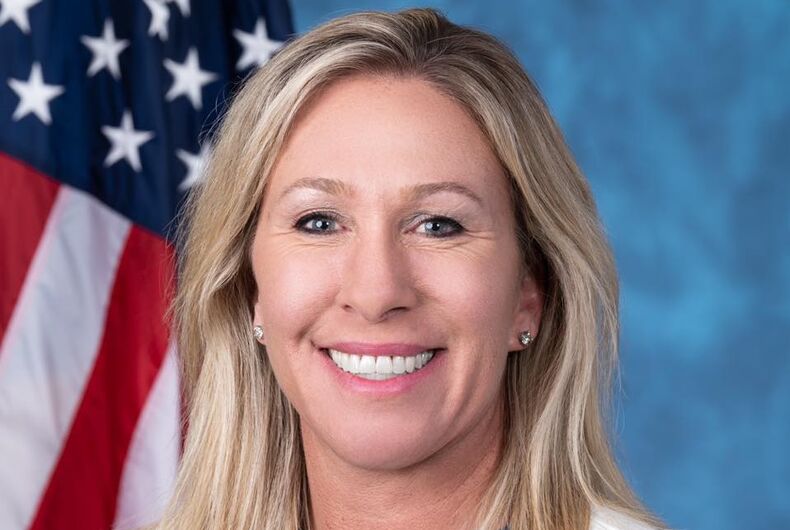 A Republican House member is co-sponsoring a bill that would ban U.S. embassies from flying Pride flags and she even referred to them as “Hate America Flags” in a statement supporting the legislation.

Rep. Marjorie Taylor Greene (R-GA) is best known for her conspiracy theories about Satanic pedophilia cabals and “Jewish space lasers,” trying to impeach Joe Biden on his first day in office, and accusing the victims of school shootings being part of “false flag” operations for the government to take away people’s guns.

Related: Anti-LGBTQ Republican says Trump “will remain in office” & that’s why Democrats want to impeach him

But she also has time to hate the rainbow flag. She is a co-sponsor of H.R. 85, the “Old Glory Only Act,” a bill that would only allow U.S. embassies and consulates to fly the American flag. This is a direct response to embassies that have been flying the rainbow flag to support LGBTQ rights.

“During my campaign for Congress, I promised that I would always put America First,” Greene said in a statement, saying that the bill will “prevent Hate America flags from flying over American embassies.”

“President Biden’s State Department has already raised a flag over our embassies that doesn’t represent the vast majority of Americans,” she said, apparently referring to Secretary of State Anthony Blinken’s statement in January that he would allow embassies to fly the rainbow flag again, something that the Trump administration opposed.

In her statement, Greene went on to say that Black Lives Matter is a “radical Marxist group” and “domestic terrorists” who want to “bring mass destruction to our country through Communism.” She claims that some “rogue” embassies have flown a flag in support of that movement.

She was probably referring to Black Lives Matter banners, which the U.S. embassy in Seoul, South Korea displayed this past June, along with a rainbow flag. The Trump administration made them take both down.

“Old Glory represents our great American military and their sacrifices to ensure our freedom,” Greene said. “This isn’t a political issue. This is about Patriotism, and we need more of it.”

U.S. embassies have been flying the rainbow flag for years to support LGBTQ rights around the world, something that the right has opposed. In 2019, Trump banned U.S. embassies from flying the Pride flag unless they got special permission, and then reportedly turned down requests from embassies in Brazil, Germany, Israel, and Latvia to fly the flag.

Secretary of State Blinken said in January that the State Department needs to take a more active role in promoting LGBTQ rights around the world.

“We’ve seen, I believe, the highest number of murders of transgender people, particularly women of color, that we’ve seen ever… and so I think the United States playing the role that it should be playing in standing up for and defending the rights of LGBTQI people is something that the Department is going to take on and take on immediately,” he said at his confirmation hearing.