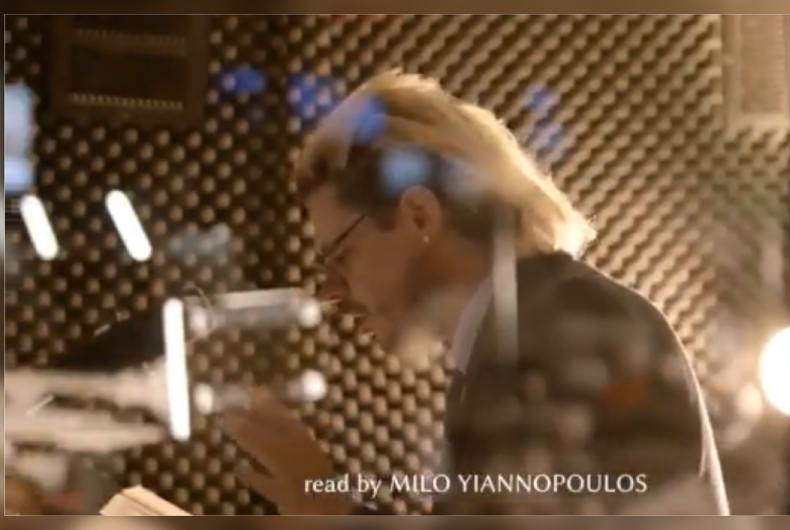 It appears that the far-right, Trump-endorsed show TruNews is attempting to expand.

Just a few days after unveiling their plan to create a “safe” space for “young, Christian men” to congregate together online, TruNews is launching a new venture with their frequent guest contributor, Milo Yiannopoulos. The first production will consist of the “ex-gay” activist reading Bible verses aloud for what he calls an audiobook, at the very least.

Right Wing Watch shared a video trailer from the production, released by Milo via his verified YouTube account.

Milo promoted it on the social messaging app Telegram and right-wing social network Gab, produced in conjunction with TruNews and presented by the Flowing Streams Church, both founded by anti-LGBTQ pastor Rick Wiles. Their operations are run out of Vero Beach, Florida.

The British far-right provocateur and former editor of Breitbart said that he “narrates Psalms, Proverbs, and Revelations” verses in this upcoming audiobook.

The full narration is scheduled to be released this fall, he added.

He’s since begun staying in Florida, appearing regularly on TruNews with Wiles, Lauren Witzke, and other co-hosts, as he plans to open a conversion therapy operation in the near future. Last month, Milo claimed that dogs stopped barking at him since he’s come out as “ex-gay.”

The Hill Reporter also reported social media posts made by Milo show self-inflicted wounds on his body, which he claims he does whenever he has “urges” to be gay.

Meanwhile, Wiles and TruNews are putting together a social media platform they plan to call “GODtribe,” which they hope to use to “minister to young men, to disciple them, and to give young men a place to congregate where they feel safe.”

Wiles, 67 already has experience “helping” young Christian men like Yiannopoulos become their best, certainly straight selves on shows that are banned by major social media platforms such as YouTube. Now he hopes to provide that for others.

TruNews received press credentials from the White House press office under former President Donald Trump in early 2020. Most recently, Wiles was hospitalized following a bout with COVID-19, which he previously proclaimed was “God’s judgment” against people he doesn’t like.

Prior to his hospitalization, Wiles blamed the pandemic on gay men, transgender children, Jewish people, and Chinese people, usually saying that the virus is a punishment from God.

Within a few weeks, he was fighting for his life from what he calls the “CCP [Chinese Communist Party] Covid Genocide.”

In his absence, Wiles’ seat was filled by Lauren Witzke and Yiannopoulos.

In June, Witzke blamed the studio’s outbreak of coronavirus on Satan, who was retaliating against them for promoting Yiannopoulos because Milo once “belonged to the darkness” but has now left it by becoming “ex-gay.”

These kids had questions about trans athletes. So they asked one.