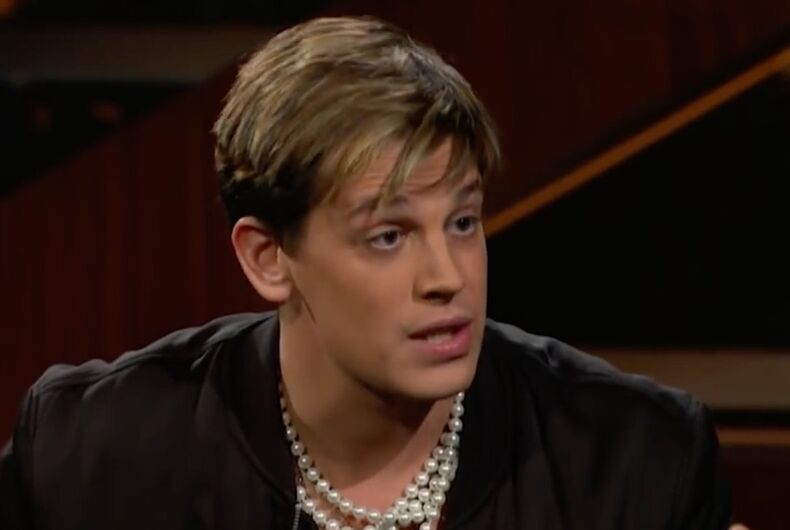 A pundit on the far-right show TruNews said that their studio is experiencing an outbreak of coronavirus because of Satan, who is retaliating against them for promoting Milo Yiannopoulos because Milo once “belonged to the darkness” but has now left it by becoming “ex-gay.”

“We constantly battle demonic spirits and demonic attacks on ourselves and we as Christians must stay equipped,” host Lauren Witzke said yesterday. “And also we must stay prayerful as we walk into these times.”

TruNews is usually hosted by pastor Rick Wiles, who has been promoting COVID-19 conspiracy theories for the past year on his platform. He has blamed the pandemic on gay men, transgender children, Jewish people, and Chinese people, usually saying that the virus is a punishment from God.

He is also against the COVID-19 vaccines, claiming that they will actually kill 70% of the world’s population. The Christian conservative pastor said that massive death will be a “good thing” because “stupid people” will die.

Last week, Flowing Streams Church – where Wiles is senior pastor – announced to congregants that there was an outbreak of COVID-19 in the TruNews studio and that Wiles had been hospitalized due to complications from the virus.

Witzke is filling in for Wiles, but instead of saying that their own outbreak is a punishment from God – the conclusion the show jumped to when discussing LGBTQ, Jewish, and Chinese people – she said that it’s actually the devil retaliating against them for being too godly.

“I don’t think it’s any coincidence that the TruNews crew all got deathly ill – got very sick – right after they brought Milo onto their show and he shared his testimony,” she said on the show.

Milo spent years as a far-right pundit before he got de-platformed for statements that sounded to too many people like they supported pedophilia. After several years of emotional breakdown, he announced last year that he was ex-gay, possibly in hopes of getting back on the right’s good side.

“You have to remember that this is a spiritual battle as well and our enemy retaliates,” Witzke continued. “This is retaliation. We constantly, you know, battle demonic spirits.”

“It was no coincidence that Rick and his crew are in the situation they’re in because they stood for Christ and had, you know, the spine to bring Milo on and share his platform and his testimony.”

“Milo is somebody who belonged to the darkness. He was Satan’s favorite sodomite, wasn’t he? And we took him back, Christ took him back.”

Lauren Witzke says the wave of COVID-19 that swept through TruNews was a demonic attack on the network for having Milo Yiannopoulos on the program after "Satan's favorite sodomite" became "ex-gay" and a Christian. pic.twitter.com/3tewgOkPSH

TruNews made national headlines last year when they got White House press credentials despite a long history of hate speech. Now Wiles’s church is asking for “an army of people praying” for their ailing pastor.

Support for marriage equality has never been higher among Republicans