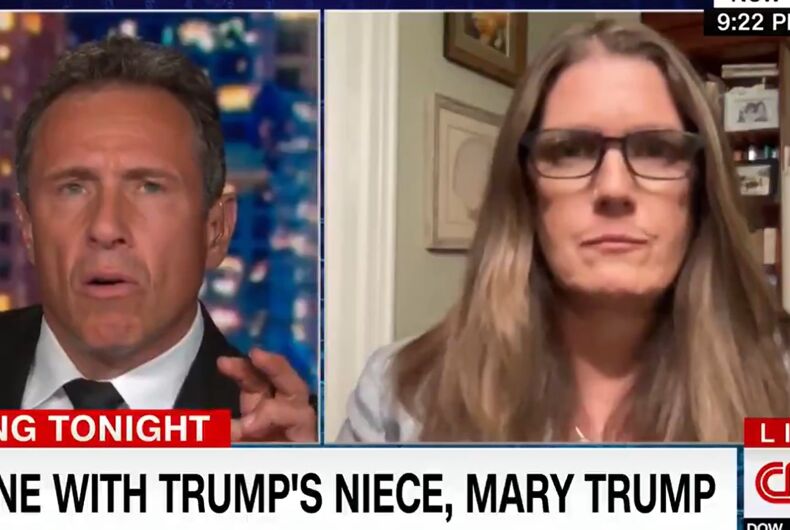 Mary Trump, the niece of former President Donald Trump and an out lesbian, appeared on Cuomo Prime Time last night on CNN to talk about her uncle’s pending legal issues. Multiple investigations into Donald Trump’s business practices are ensuing, and a New York state grand jury may issue indictments against the Trump family, including against Donald Trump himself.

“I think if that were to happen, if prosecutors were to go after his children, he would fully expect them to take a hit for him, to benefit him. What he probably doesn’t understand is that’s not really how it works,” Mary told host Chris Cuomo.

“But Donald would never imagine in a million years that his children would do that, although I’m fairly sure they would,” she added, “so if that indeed happens, it’s going to be fascinating because he would never do anything to protect them if it were at his expense.”

“How do you know?” asked Cuomo.

“I’ve known him my whole life and unfortunately, I’ve had to analyze him pretty closely over the last four or five years,” she responded. “This is somebody who’s never changed… and as you said earlier, he has one thing he cares about, and that’s himself. That will never, ever change, no matter who gets in his way, no matter who gets hurt, even if it’s his kids.”

Last month, Attorney General of New York Letitia James announced that her office is investigating the Trump Organization, which Donald Trump ran until becoming the Republican nominee for president in 2016, “in a criminal capacity.” Currently, Eric Trump and Donald Trump Jr. are top executives in the organization, and they could also face prosecution.

“What’s good for him has always been his only calculus,” Mary Trump said about her uncle. “Really that’s the only calculation he ever makes.”

Mary has been in the news throughout the last two years for denouncing her uncle. She wrote and published her tell-all book Too Much and Never Enough: How My Family Created the World’s Most Dangerous Man, where she explains how toxic family relationships and bigotry led to making Donald Trump what he is today.

In the book, Mary Trump explains that by the 1990s she was already living with a woman and planning to marry her. She said in her book that the whole family got together while her grandfather was sick and dying and that she thought about coming out then.

Currently, Mary Trump is suing Donald Trump. She alleges that he, along with his sister Maryanne Trump Barry and his late brother Robert, falsified documents to undervalue the share of the family business that she inherited when Fred, Jr. passed away in 1981. Mary was only 16 years old at the time.

She previously told CNN’s Anderson Cooper that the day her uncle had to leave the White House was “the worst day of his life.”

"The only way [Trump] can continue to perpetuate the myths … is to continue to lie. There is no truth here and there is no endgame," says former Pres. Trump's niece, Mary Trump. "…It's about maintaining power and using that in the event that he gets indicted." pic.twitter.com/f0Y0qNXCFE