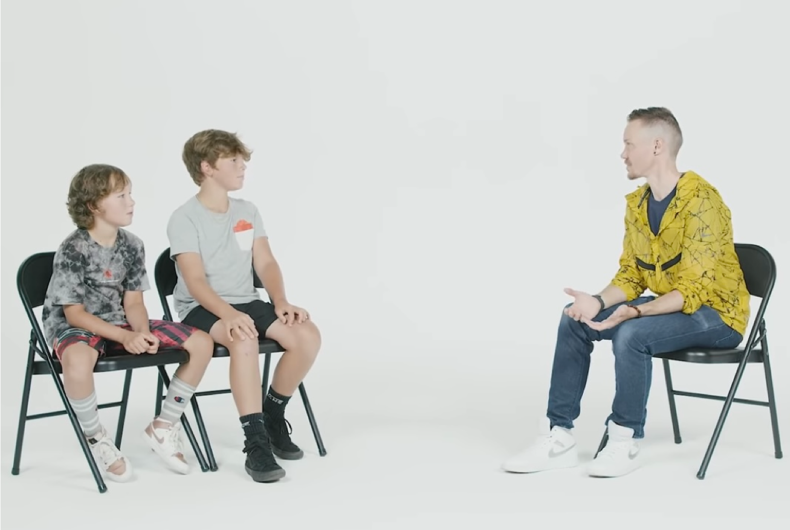 Since early 2020, transgender youth have been the main target of Republican-led, hate group-funded efforts to pass anti-LGBTQ legislation. That’s led to laws being enacted in nine states that ban trans people from participating in sports, mostly on the basis that it would be “unfair” to girls or women.

Throughout the crusade, very few people have had the opportunity to hear directly from actual trans athletes, especially children and youth that the laws supposedly “protect.” Until now — a video released this weekend records kids in conversation with a trans athlete, asking about all the issues that trans people are facing and what their careers are like.

The video was released on the HiHo Kids channel on YouTube, a Cut.com brand which “promotes empathy through play.” Cut.com collaborated on the video with the Human Rights Campaign (HRC) Foundation and Athlete Ally.

The athlete on the receiving end of the questions is Chris Mosier, a trans man, triathlete that has made Team USA at least six different times, and the founder of transathlete.com. He was the first transgender athlete to qualify for a men’s Olympic trial.

Mosier has spoken out against the wave of anti-trans legislation since 2020, including efforts to prevent trans youth or trans adult athletes from competing in sports.

“It’s so important for me to use my platform to speak out against these bills and make sure that people are informed,” he’s previously told The New York Times.

The video is part of Cut.com’s “Kids Meet” video series. It also coincides with the start of the Olympic Games in Tokyo and HRC’s “Count Me In” campaign.

Mosier talks with the kids about some of the basics of being a transgender person — including defining what “transgender” means, the sports he’s competed in (such as race walking), and figuring out the identity — and some of the specific challenges he’s faced as a trailblazing veteran athlete.

“Every child should be able to pursue their dreams and play the sport they love,” text reads at the end of the video.

“Since coming out publicly as a transgender person in sports in 2010, I have made it my mission to make it easier for every transgender and non-binary athlete after me — especially young people,” Mosier said in a statement with the video’s release.

He said that he has “felt a sense of pride in being able to represent my country at the highest level of my sports… but also deep sadness knowing young people like me are being prevented from playing sports” across America.

“Participating in sports as a young person provided me a sense of belonging and a sense of self that every young person should have the opportunity to experience. Working with the young people in this video gives me a sense a hope and a renewed enthusiasm and drive to continue to use my platform as an athlete to fight for the rights of transgender and non-binary athletes around the globe,” Mosier said.