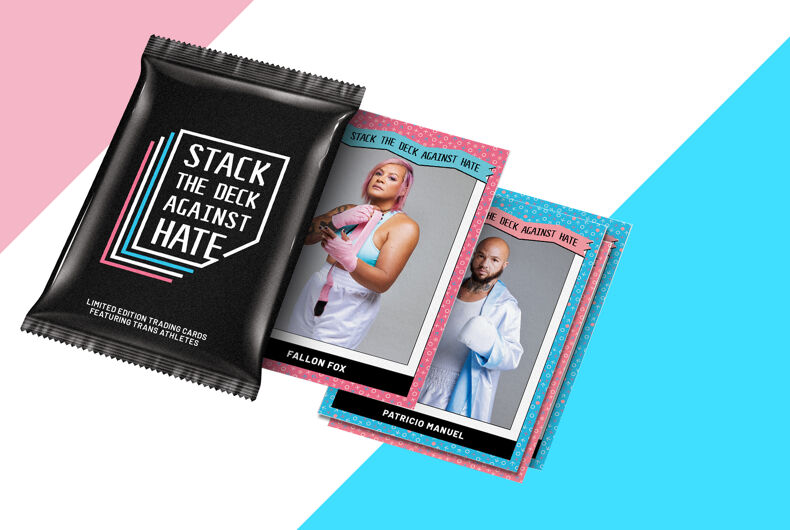 A new campaign has launched with the focus of combatting the continuous legislative attacks on transgender youth, young adults, and athletes. The campaign is starting with producing an old staple in American culture: trading cards.

And all of them are made out of recycled copies of anti-trans legislation filed around the nation over the past year.

Related: Trans wrestler Mack Beggs speaks out on being forced to compete as a girl: “It’s a no-win situation”

Stack the Deck Against Hate is an initiative created by a partnership between advocacy groups Lambda Legal and Athlete Ally, marketing agency Campbell Ewald, and several other businesses supporting the “100% pro-bono effort.”

“The Stack the Deck Against Hate campaign is shredding stacks of hateful anti-trans legislation and recycling them into sports trading cards that celebrate and honor trans athletes across the country,” the campaign announced this week.

“This action sends a powerful message to trans athletes: You are seen and valued, and you will never be legislated out of existence.”

The campaign was launched directly in response to the wave of anti-trans bills enacted in the first half of 2021, specifically the seven states where bans on trans youth from participating in sports in accordance with their gender identity were enacted. Many of those laws that passed went into effect beginning this month.

Lambda Legal, in conjunction with the ACLU, has already filed a federal lawsuit challenging West Virginia’s ban on trans youth in sports. Their lawsuit is on behalf of Becky Pepper-Jackson, an 11-year-old trans girl who wishes to participate in cross-country sports but can’t try out for the girl’s team under the ban.

“Stack the Deck Against Hate comes at a crucial moment,” Kevin Jennings, the CEO of Lambda Legal said in a statement, “as transgender and non-binary athletes and students across the country are being attacked by legislators seeking to further degrade and ultimately erase them.”

Now, the initiative is flipping the switch — erasing the discriminatory bills and embracing the athletes who just want to compete.

“The Stack the Deck campaign supports access to the lifesaving power of sports, and every young person deserves a chance to thrive,” Hudson Taylor, the executive director of Athlete Ally, said in a statement.

“Transgender youth play sports for the same reason as their cisgender friends: for the invaluable lessons on teamwork, discipline and leadership, and the incredible mental, physical and social benefits that sports bring,” Taylor added.

The cards are currently only available publicly for those who make a donation to the campaign.

Of course, they also include the athletes’ records and titles as well, such as Manuel’s record as a five-time amateur boxing champion and Olympic trial participant, or Fox’s 5-1-0 professional record.

Beggs, the subject of Changing the Game, a recent Hulu documentary, as well as the ESPN 30 for 30 short “Mack Wrestles,” told LGBTQ Nation in a 2019 interview, “I always enjoyed sports. I never had anybody that was negative towards me. It was a different outlet to channel a lot of the anxiety and hatred and depression I had when I was younger and coping, trying to figure out who I was.”