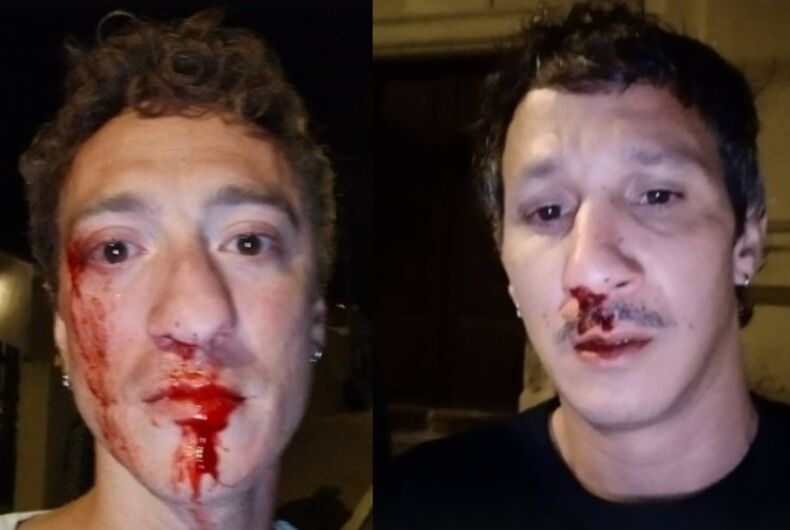 Mickaël and Benoît after the attackPhoto: Instagram screenshot via TETU

A gay couple says that they were beaten by a mob of young men last night after they were confronted on the dance floor at a bar for being “against nature.”

Even worse, while they were being beaten, a crowd of around 60 people surrounded them but did nothing to help. “It’s like they just took out some popcorn” and watched a show, one of the victims said.

Related: A couple was attacked for holding hands at Miami Pride. How police reacted made it worse.

Mickaël told the French LGBTQ publication TÊTU that he and his boyfriend Benoît were the small town of Luri, Corsica visiting Benoît’s family for the July 14th national holiday.

“I was dancing just with my boyfriend, his brother, his wife, and his sister,” Mickaël recounted about last night. “A group of teenagers who were around 15- to 20-years-old made fun of us and called us faggots.”

One of the teens took out his phone and showed him a picture of a person urinating on a rainbow flag.

“I tried to stay calm and I told him that I’m actually gay,” Mickaël said. “That’s when he showed me his cross and told me that it’s against nature.”

The couple had had enough and they left the bar, but the teen who showed them the picture followed them and grabbed Mickaël’s arm.

“He told me to leave him alone and called me a faggot,” he said. And that’s when the confrontation turned violent.

According to both of the men, the teenager and around 20 other people who came out of the bar started beating them to the ground in between some cars that were parked in the street.

“I took five punches before I was stuck between two cars with 10 guys on me,” Benoît said. “Fortunately I didn’t lose consciousness, who knows what could have happened.”

“Would I still be alive?” he asked, explaining that he was thinking about Samuel Luiz, a 24-year-old gay man who was beaten to death by a mob in the street in Spain earlier this month.

They said that about 60 people watched the attack and did nothing to help them.

“We heard them scream ‘Faggots!’ like they were happy to see us die,” Mickaël said.

TÊTU confirmed with the Luri police department that there was a violent altercation last night and that an investigation has been opened.

Mickaël and Benoît left the hospital at 2 a.m. this morning and said that they were told to take at least eight days off work to recover from their injuries.

“It’s not the first time that I’ve been attacked,” Mickaël said. “But I haven’t faced such violence from a whole mob attacking me, it was shocking.”