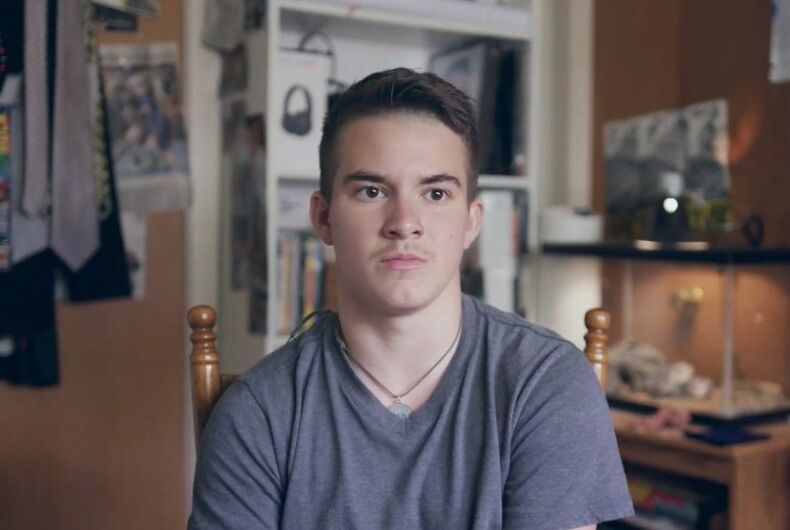 Mack Beggs, trans male Texas high school wrestler who won the state’s girls champion despite wanting to wrestle boys, was tired of news articles telling his story. So when ESPN Films contacted him two years ago to shoot a documentary about his experience, he thought it’d be a great chance to tell his story for himself.

The film, “Mack Wrestles,” just premiered at the 2019 SXSW Conference & Festivals in Austin, Texas. Beggs attended the premiere and spoke to LGBTQ Nation about his experience and his life since graduating high school.

The film provides several stunning insights left out of newspaper reports. For one, even though Beggs grew up as an active and happy tomboy, in grade school he began cutting himself. He told his grandmother that it made him feel better, but he couldn’t explain why.

His grandmother Nancy feared that he would one day kill himself. But then, when Beggs started wrestling in ninth grade, he just stopped.

Related: Martina Navratilova’s comments against trans athletes are starting to cost her

At the time, Nancy told Beggs’ wrestling coach, “I don’t know what happened, but I know you saved his life, because he wouldn’t be here if he hadn’t started wrestling.”

The coach told her, “Every once in a while a wrestler comes along and it defines who they are and what they are. They buy into it as a way of life.”

Beggs tells LGBTQ Nation, “I always enjoyed sports. I never had anybody that was negative towards me. It was a different outlet to channel a lot of the anxiety and hatred and depression I had when I was younger and coping, trying to figure out who I was.”

He had previously tried pole-vaulting, soccer, basketball and softball but, “Wrestling gives you a purpose to look at life in a whole different way and to take it on and not sit back and do nothing about your life,” he tells LGBTQ Nation.

Because Texas is one of nine U.S. states who uses birth certificates to determine the gender of student athletes, Beggs was forced to wrestle girls rather than boys.

And because Beggs had been so public about his transition — sharing videos of his progress on social media — sports families began buzzing about it every time Beggs had a wrestling tournament.

At the 2017 regional state tournament, one of his female competitors refused to wrestle him at her parent’s suggestion. As he advanced to the state championship, a parent filed an injunction to stop him from competing.

But a state law said that because Beggs’ medication was being legally issued by a physician, it wasn’t the same as taking “performance enhancing drugs” and he couldn’t be disqualified for it.

Hormone replacement therapy isn’t the same as taking “performance enhancing drugs” anyway. Not all trans patients take literal steroids, and experts question the competitive advantage given to those who do.

Mack won the state championship amid a mixture of cheers and boos. He says he couldn’t hear the boos really… just noise. Afterwards, he was rushed off to the locker room as the stadium floor was swarming with cameras and journalists.

As someone who’s easily distracted, Beggs said, “The next thing I knew I was just being dragged off to the hallway. That’s literally what it felt like. It didn’t even feel like a celebration—that’s the weird part.

By this point, Beggs’ story had been covered by numerous press outlets, including FOX News and international media.

“I didn’t mind having the attention,” Beggs tells LGBTQ Nation, “it’s just the fact of the state titles themselves… it’s not the titles that I want them to be.”

Shortly after graduating, Mack qualified for the USA Men’s National Team alongside other college-aged, Olympic-level competitors. But when his work commitments conflicted against his team practice schedule, he was dropped from the team, something he still feels disappointed about.

Nonetheless, Mack has since begun wrestling at Life University in Marietta, Georgia. He’s studying health science and coaching to one day become a wrestling coach. He also wrestles for the school, this time with other men.

“It feels like unreal,” he continues, “because I never thought I would be with a team like that since like I started I just basically wrestled girls all my high school career.”

Congressional Democrats introduce the Equality Act. Could it finally pass?