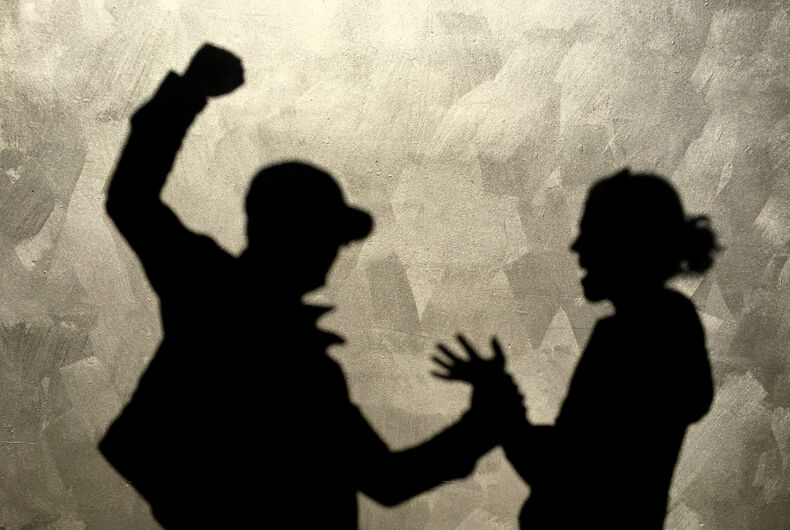 Two transgender women in California will stand trial on felony assault charges for defending themselves when a man pushed them to the ground in what appears to be a bias-motivated attack.

Orange County Superior Court Judge Scott B. Cooper even said in a decision yesterday that while the cops admitted to hiding exculpatory evidence like witness’s videos and the trans women’s injuries and to calling the women multiple slurs, the trans women can still face charges for the October 9, 2020 incident.

The women – referred to as [deadname] Matthyssen and [deadname] Valenzuela-Vasquez in local media reports – were at the rooftop bar at Hurricanes in Huntington Beach, California, watching people in the street. That’s when Nathan Merrick and Selena Villarico passed by and started yelling insults at them and challenged them to a fight, according to testimony presented in court for a preliminary hearing.

They left the bar and Merrick pushed Valenzuela-Vasquez to the ground, which someone else caught on video. She and the other woman pulled out a pepper spray and a Taser, and that’s when police arrived and arrested the trans women. They did not use the pepper spray or the Taser.

“Oh yeah, I forgot,” admitted Huntington Beach Police Officer Tyler DeTrinidad in court when asked about why the police report did not mention the fact that Valenzuela-Vasquez said she was punched by Merrick.

The women’s lawyers pressed DeTrinidad on audio captured by his bodycam where Valenzuela-Vasquez can be heard asking the officer if she was bleeding from her head. He told her that he saw “some swelling on the side of your head.” The officer also did not include that in his report, even though it shows that he saw her injury.

DeTrinidad said that he didn’t tell his colleagues that Valenzuela-Vasquez said she was punched first and that he did not attempt to find a man fitting her description nor did he and other officers talk to witnesses about the alleged punch or review security camera footage when making the arrests.

“It’s never appropriate to make fun of someone’s sexual orientation,” he said when asked about his use of that slur, adding that it was inappropriate.

Another police officer, Joseph Giles, testified that he heard DeTrinidad using the slur but didn’t say anything about it or report him.

Bodycam audio shows that his only response to DeTrinidad’s use of that word was to ask if his camera was recording them.

His “main concern was that it was being recorded, not that there was a possible hate crime,” one of the trans women’s lawyers said.

Giles testified that a witness showed him a Snapchat video where Merrick could be seen pushing Valenzuela-Vasquez twice to the ground and taunting her. The officer admitted he didn’t tell other officers about the video and he didn’t mention it in the police report.

“What you have is they’re all standing there making fun of these transgender women,” their lawyer concluded.

Prosecutors countered that the officers “acknowledged and corrected their mistakes” in court.

Judge Cooper said that he would not dismiss the charges because there’s no evidence that Matthyssen did not brandish the Taser in a threatening way, even if the police officers acted inappropriately.

Matthyssen faces a felony charge for use of a stun gun to commit a crime, which could get her up to three years in prison in California. She is also facing a misdemeanor battery charge, which could result in one year in prison.