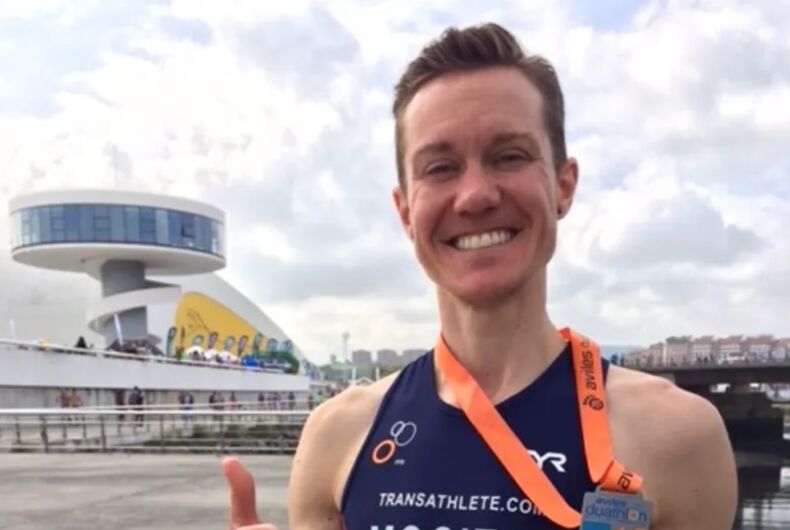 Chris Mosier, the first transgender athlete to qualify for a men’s Olympic trial, paused his training to go to Idaho and speak out against several anti-trans bills working their way through the legislature.

One of these bills, House Bill 500, seeks to ban transgender women and girls from competing in women’s sports. The bill allows people to challenge an athlete’s gender if they are competing in girls’ sports and would even require medical exams – including examinations of genitalia and blood – to confirm whether a student should be able to compete.

“This is one of the only states in the country that is saying it wants to do genital exams… to determine if [students] are girl enough to play a sport,” Mosier said during a Tuesday night rally at the Idaho Capitol, according to the Idaho Press.

HB 500 was introduced by state Rep. Barbara Ehardt (R), who is pushing the bill under the guise of protecting women.

In a statement, Ehardt said, “It is disheartening to think that some athletes, under the guise of equality, do not support girls and women as they pursue their dreams to stand atop the podium as a champion because a biological male had taken her spot.”

“Little girls need to know that they can grow up, compete and be successful in sports, just like little boys,” she said, referring only to cisgender girls. “They have dreams and it is our responsibility to do all that we can to help them pursue and achieve these dreams by maintaining a fair playing field.”

“This is an entry point for further discrimination, not only against the transgender community, not only against transgender youth but more discrimination to women and girls, to communities of color to racial minorities to religious minorities and to anyone who is not straight, cisgender, and white,” Mosier told KTVB7 News. “The thing about these bills is that they are intended to solve a problem that doesn’t really exist. It is a problem in the eyes of the legislators.”

Mosier, who is sponsored by Nike, was also one of the first trans athlete to represent the United States internationally.

He feels it is his duty as an athlete to speak out.

“There are so many great people in this state, on the ground doing work to combat these bad bills,” he said. “My role as an athlete with this platform and social media is that I have the opportunity to amplify the message that other people are sending.”

HB 500 has already passed the Idaho House 52-17. If it passes the state senate, Idaho could become the first state in the country to explicitly ban trans athletes from competing with the gender with which they identify.

He also said that trans youth are likely already suffering from having to watch the debate over this bill. They “are watching lawmakers debate whether or not they are real,” Mosier said. “Regardless of what happens with this bill, some of the damage has already been done.”

Mosier continued to speak out against anti-trans legislation around the country. At Tuesday’s rally, he called HB 500 the worst bill in the country, but he has since tweeted about what he has deemed an even worse bill making its way through the Arizona legislature.

I'm in Boise speaking out about HB500 & Arizona lawmakers just made me change my pitch: Idaho went from being the worst place in the country for girls in sport to 2nd place following the advancement of #HB2706.#AZleg

Idaho’s legislature is also considering a law that would make it the second state in the country to have a statute that bans transgender people from correcting their birth certificates.