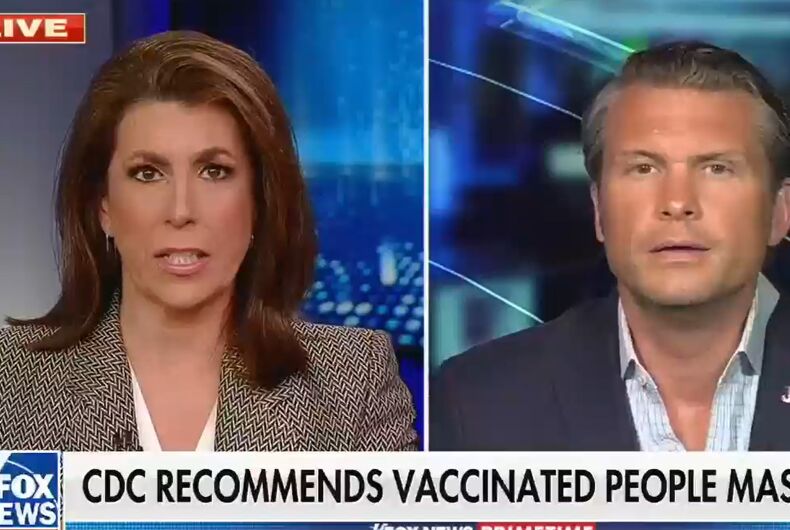 Tammy Bruce and Paul Hegseth talk about how bad masks and vaccines are, wondering why COVID transmissions are on the rise.Photo: Screenshot/Media Matters for America

Out Fox host Tammy Bruce said that she wishes she could give back the vaccine, citing “the distrust that continues” against the Centers for Disease Control (CDC), distrust that she did nothing to quell.

“I got the vaccine!” Bruce on Fox News Primetime last night. “In certain ways, it’s like, ‘If I could give it back!’ at this point, you know?”

Bruce was talking about the new CDC guidance yesterday that said that even people who are vaccinated should wear masks indoors if they live in a part of the country experiencing “substantial or high transmission” of COVID-19.

CDC Director Rochelle Walensky said that the decision was not “taken lightly” but that this is a “temporary measure” to reduce pressure on hospitals and health care workers in “the areas of high transmission” until more people get vaccinated.

Many hospitals in low-vaccination areas are full in the new surge of COVID-19 among the unvaccinated, and requiring everyone to wear a mask again in schools and grocery stores – instead of trusting people when they say they’re vaccinated – is one of the few measures that can be taken to keep the death rate down.

Part of the problem is Fox News, whose viewers are less likely to get vaccinated than other adults. Bruce, who has been vaccinated and is therefore at almost no risk of dying from the virus, invited Fox & Friends co-host Pete Hegseth on who said, “You can’t keep up with the so-called science.”

Hegseth left his second wife with whom he had three kids after he fathered a child with his mistress who he then married, and he said that he’s only worried about the children.

“My wife and I were sitting on the porch just 30 minutes ago,” he said, referring to the former co-worker he had an affair with, “talking about the reality that our kids could be walking back to school next year wearing masks!”

“Our decision is that we’re not going to tolerate that,” he said, not explaining what he meant.

Bruce herself said that the CDC guidance would make people refuse to get vaccinated “because of this distrust that continues,” as if distrust in the vaccines has nothing to do with segments like her own where she and her guest are making the vaccines seem dangerous and unreliable even if they aren’t directly saying that the vaccines will hurt people.

The vaccines are safe and effective and received authorization from the FDA. Over two billion people worldwide have gotten at least one dose of a COVID vaccine, with few people getting major side effects and COVID-19 death rates dropping precipitously in countries with high vaccination rates.

Bruce could have mentioned this, considering that she has been vaccinated herself instead of suffering in a hospital like some of her viewers are.