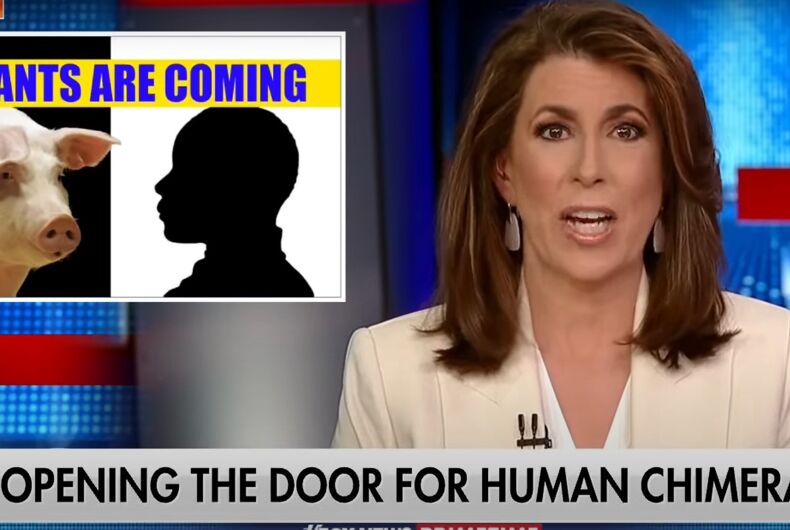 Saying that the chimeras are “obviously from Hell,” Bruce said that “the Democrats will have blood on their hands for not joining the GOP and stopping it when they had a chance.”

Bruce was referring to a $247 billion bill passed by the Senate earlier this week that includes funding for scientific research. Senate Republicans introduced an amendment to stop research into making “human-animal chimera” and imposes prison sentences and fines on scientists who try to create them.

Democrats voted against this because the research being referred to is intended to produce possible body parts or tissues, not fully-formed mutants who will live among us.

“There is a way to genetically engineer both the embryo and the stem cells so that the stem cells will only make a particular organ,” bioethicist Insoo Hyun told NPR. “Nobody wants a chimeric embryo to grow into a part-human, part-animal thing that has human cells from head to toe mixed in.

“China is already doing it!” Bruce said on Fox News, with an image of the Wuhan Institute of Virology on the screen. While that research institute has been at the center of theories about COVID-19, it’s not clear what connection it has to the genetics research Bruce is talking about, which is a report of some monkey-human cells Chinese researchers were able to get to divide in a lab for less than three weeks before they died.

“Chimeric research is Pandora’s box, that’s obviously from hell, that should not be opened. But the scientific community, spurred on by their own hubris, may very well open it, using American taxpayer dollars. And if that happens the Democrats will have blood on their hands for not joining the GOP and stopping it when they had a chance.”

Mixing humans and animals has been used in medical research for at least several decades. Humanized mice, which are mice that have been engineered to express human gene products, have been key to HIV research that has saved countless lives.

Christian conservatives have long opposed this sort of research, especially when they involve tissues derived from aborted fetus cells.

The amendment Bruce discussed was supported by anti-choice groups like the National Right To Life and the anti-LGBTQ hate group Family Research Council. Only Democrats voted against it and only Republicans voted for it in the Senate. Sen. Joe Manchin (D-WV) abstained.