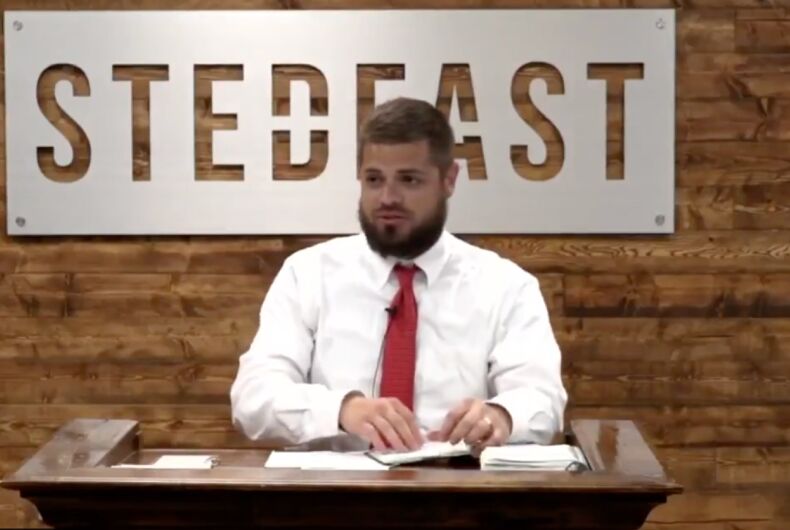 Jonathan Shelley, pastor of the Stedfast Baptist Church in Hurst, Texas, celebrated a fatal accident at the Wilton Manors, Florida Pride parade last weekend. An elderly driver accidentally drove into the parade, killing one and injuring two others.

“I think only one person died,” he told congregants. “So hopefully we can hope for more in the future.”

After listing off a litany of sins, Shelley told parishioners, “it is going beyond just saying you do all this wicked stuff. It’s saying you enjoy it. You enjoy murder. You enjoy malignity. You enjoy hating God.”

“Look, there’s only one group that enjoys that: It’s the Pride parades going up and down the street,” he said. “And, you know, it’s great when trucks accidentally go through those, you know, parades. I think only one person died. So hopefully we can hope for more in the future.”

“I hope they all die!” he continued. “I would love it if every fag would die right now.”

Shelley is part of a growing cadre of hateful Baptist preachers trying to pick up the mantle dropped by the Westboro Baptist Church.

Pastor Steven Anderson of Faithful Word Baptist Church got worldwide attention several years ago for his violently homophobic comments. He is a Holocaust denier who praised the Pulse nightclub shooter, calling victims “a bunch of disgusting perverts and pedophiles” and “disgusting homosexuals who the Bible says were worthy of death.”

He also said that he prays that Caitlyn Jenner will die, and, more recently, he spoke at an event to honor the Pulse shooter who killed 49 people in an LGBTQ club in Orlando.

Anderson’s rhetoric is so extreme that he has had visas refused for speaking tours in dozens of countries, including South Africa, Ireland, and the entire Schengen Area in Europe.

Rep. Louis Gohmert (R-TX) recently made the news when it was uncovered that he “mistakenly” gave the hateful preacher a $5,500 donation.

Yesterday, a Christian hate-preacher from Texas celebrated a gay man's death at a Pride parade.

"It's great when trucks accidentally go through those… parades… We can hope for more in the future… I think it's great! I hope they all die!"

(Warning: The language gets worse) pic.twitter.com/3VsYC8KmjA

Editor’s Note: A previous version of this article identified Rep. Gohmert as being from Iowa instead of Texas.

A gay waiter was humiliated & stiffed by “Christian” customers. Then TikTok stepped in.