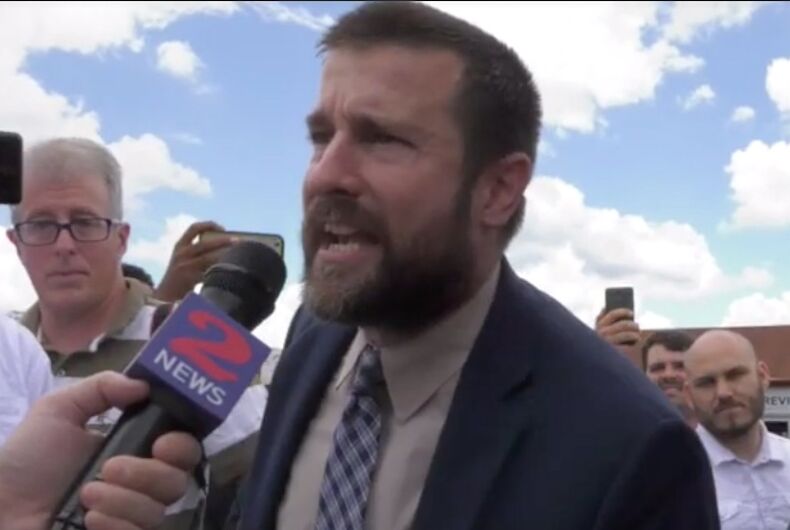 A staunchly anti-LGBTQ Republican member of Congress is claiming that what he reported as a donation to a hate pastor was actually a “mistake” and that he actually donated to a Christian singer with a similar name.

Rep. Louie Gohmert’s (R-TX) office is scrambling to explain a $5500 donation to pastor Steve Anderson’s church. Anderson made international headlines in 2016 after video went viral that showed him praising the Pulse nightclub shooter for killing “a bunch of disgusting perverts and pedophiles.” Anderson has since been banned by multiple countries for his anti-LGBTQ and anti-semitic hate speech.

Related: Anti-LGBTQ Congressman Louie Gohmert says it’s possible to give yourself COVID-19 by wearing a facemask

The Louie Gohmert for Congress Committee recorded a donation in their Federal Election Commission (FEC) filing that a $5500 donation was made to an entity called “Anderson Ministries.” While that’s not the name of Anderson’s church, Gohmert put down the same Tempe, Arizona address as Anderson’s church and used his last name in the name of the organization. The payment was recorded as a “donation.”

The Daily Beast spotted the donation and asked his office for comment, and they’re now saying it was a mistake. A spokesperson said that Gohmert’s campaign committee hired Christian singer Steve Amerson of Granada Hills, California and someone made an error in the FEC filing.

His office is claiming that they got the “name, purpose, and address” wrong when recording the payment to the Christian singer, and somehow all three of those point to a donation to Anderson’s Faithful Word Baptist Church, an SPLC designated hate group.

“The good news is that there’s 50 less pedophiles in this world,” Anderson said in a sermon about the 2016 shooting at the LGBTQ nightclub in Orlando that left 49 people dead. He said that the club was full of “disgusting homosexuals who the Bible says were worthy of death.”

Video of the sermon went viral at the time and Anderson said in a later video that he was getting harassed by “self-centered jerks [who] have no empathy for other people.”

He has also been criticized for his anti-semitic beliefs. Some sermons he posted online had titles like “The Jews Are Our Enemies” and “Unbelieving Jews Are Under God’s Wrath.” He has also claimed that the Holocaust didn’t happen.

His church even produced a video that called Dr. Martin Luther King Jr. “a wicked false prophet, a sexual pervert, and a Communist tool,” has made negative statements about Islam, and has called for ending women’s right to vote.

Anderson’s rhetoric is so extreme that he has had visas refused for speaking tours in dozens of countries, including South Africa, Ireland, and the entire Schengen Area in Europe.

“Anderson is a highly problematic individual who pumps antisemitism, hatred and bigotry into the rhetoric, the preachings, and the teachings of these other churches,” said Aryeh Tuchman of the Anti-Defamation League, an organization that fights anti-semitic extremism.

Tuchman told The Daily Beast that Gohmert’s alleged donation to Anderson is “mysterious” because Anderson has also criticized Donald Trump and other major Republicans in the past.

“If he knew what Anderson was about, then it is shocking and highly disturbing that he would give money to a known anti-semite, Holocaust denier, and homophobe,” Tuchman said. “If this was a donation where they were unaware of who Anderson was, and what he represents, I don’t know why they why they would send that donation, but there was a level of due diligence that wasn’t made.”

Rep. Gohmert is also an anti-LGBTQ extremist, although his rhetoric has not yet gotten as violent as Anderson’s. In 2013, Gohmert said that allowing gay people in the Boy Scouts would lead to child molestation.

“You’re going to allow a situation where a 17-year-old guy that’s sexually attracted to other guys gets in a little tent with an 11-year-old new rookie Boy Scout and they spend the night together, night after night at camp? I mean, come on,” he said on a Christian conservative show.

That same year, he compared homosexuality to bestiality and polygamy: “And the problem is once you draw that limit; it’s kind of like marriage when you say it’s not a man and a woman any more, then why not have three men and one woman, or four women and one man, or why not somebody has a love for an animal?”

In 2014, Gohmert compared LGBTQ activists to Nazis on the House floor: “People like me are considered haters, hate mongers, evil, which really is exactly what we’ve seen throughout our history as going back to the days of the Nazi takeover in Europe.”

“First, they would call people “haters” and “evil” and build up disdain for those people who held those opinions or religious views or religious heritage,” he said in a House speech. “And then the next came, well, those people are so evil and hateful, let’s bring every book that they’ve written or has to do with them and let’s start burning the books, because we can’t tolerate their intolerance.”

Gohmert later appeared in a ridiculous documentary about how LGBTQ people may say they’re pushing for equality, but they really want “the criminalization Of Christianity.”

In 2016, he said that the Supreme Court decision that legalized marriage equality in the U.S. was equivalent to the Justices telling Americans to “forget what God said.”

“Basically, to my mind, they were ruling, ‘The five of us, we five Supremes, are now your God,’” he said.

He has gotten consistent “0” scores on HRC’s Congressional Scorecard, showing his constant opposition to LGBTQ rights in Congress.

Gohmert is currently suing the House of Representatives after he was fined for setting off metal detectors and refusing further screening. He says the security policy was put in place to harass Republican members of Congress.

A woman came out to her parents with a Pride flag cake. They could not have reacted better.