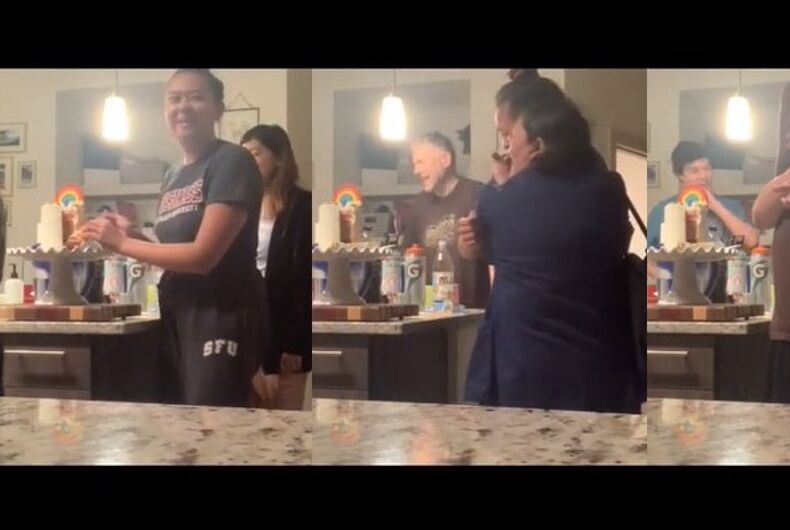 A woman came out to her supportive family with a lesbian pride flag cake in a video that’s going viral for all the right reasons.

Sabrina Bailey recorded her parents’ great reaction to her coming out and posted the video to TikTok with the words: “I made a Pride cake to come out to my parents.”

Her parents walk into room in the video and Bailey is standing by the cake, which has a rainbow on top.

“Yeah, it’s supposed to look like the lesbian flag as part of my coming out to tell you guys that I’m gay,” she tells them.

“Awesome!” her mother says and kisses her on the cheek. “Congratulations!”

She starts crying and her mother comforts her, but then jokes about why she had to come out at 10 p.m.

“I didn’t think you were going to be late,” she responded. Her dad then goes in for a hug.

“Happy pride babes. Remember to be yourself and love who you wanna love,” she wrote when sharing the video, which has been liked almost two million times.

Happy pride babes. Remember to be yourself and love who you wanna love. #pride2021🏳️‍🌈 #fyp #loveislove #comingout #parents

“You guys are literally the sweetest thing ever,” Bailey said in a follow-up video after her first video got tens of thousands of supportive comments. “I was not expecting that video to blow up quite as big as it was.”