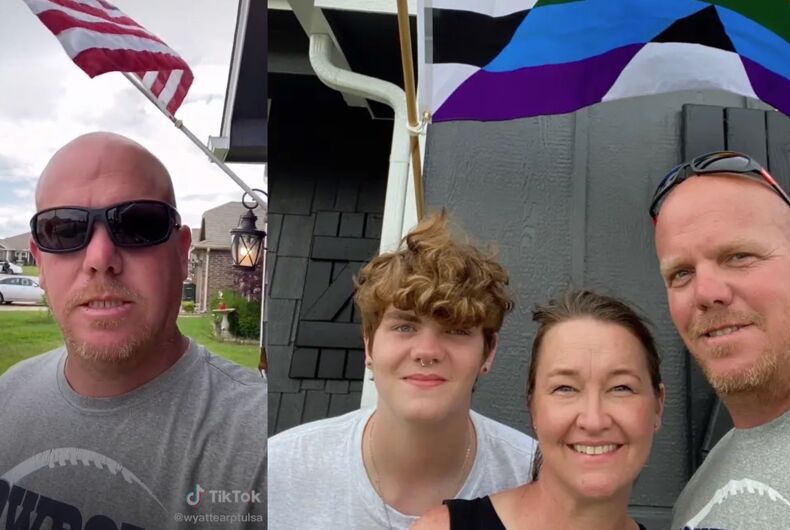 John, Janell, and Caden Wyatt are not afraid to show their pride.Photo: screenshot/composite

A TikTok video of John Wyatt and his son, Caden, hanging a Pride flag outside of their smalltown Oklahoma home has gone massively viral, racking up tens of thousands of likes and shares.

“We are fixin’ to shock Oklahoma,” he said right before the flag went up in a neighborhood festooned with Trump banners.

As Lady Gaga’s “Born This Way” plays in the background, the two hoist a Pride Ally flag for the town to see. Caden came out as gay a year ago.

“I’m really lucky to have such supportive parents, because I know a lot of other people aren’t as lucky as me,” Caden told BuzzFeed News.

“There’s a lot of Q flags in our neighborhood, a lot of Trump flags and Blue Lives Matter Flags, [but] you don’t see any pride flags at all,” Wyatt said.

He says he once subscribed to the town’s typical mentality on LGBTQ issues. Wyatt was conservative and religious.

“That’s when we really started embracing [the community], because we knew our son was gay, and at any time he could come out,” he said. “And he needed to see that we were going to be able to support him and be there for him.”

Wyatt says there’s a bigger message in hanging the flag outside the family home than just support for Caden though.

“We’re letting people know it’s a safe place,” John said. “I’m not trying to cause any controversy in the neighborhood, but maybe there’s some person out there who will see that flag and smile and feel safe.”

A woman came out to her parents with a Pride flag cake. They could not have reacted better.