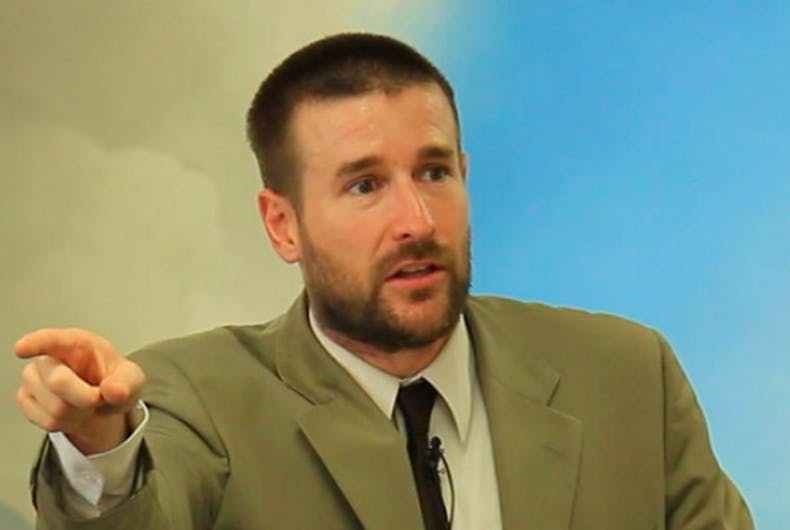 Activists in Ireland are trying to get American hate preacher Steven Anderson’s visit to their country canceled. In 2016, Anderson received international condemnation when he praised the shooter who killed 49 people at the LGBTQ Pulse nightclub in Orlando.

“The good news is that there’s 50 less pedophiles in this world, because, you know, these homosexuals are a bunch of disgusting perverts and pedophiles,” he said of the mass shooting.

Anderson is a Holocaust denier who praised the Pulse nightclub shooter, calling victims “a bunch of disgusting perverts and pedophiles” and “disgusting homosexuals who the Bible says were worthy of death.”

Earlier this year, he was forced to cancel part of a “soul-winning” trip to the Netherlands, Sweden, and Ireland when Dutch State Secretary Mark Harbers of Justice and Security convinced the Schengen Area to ban him from entering. The Schengen Area is 26 European countries that agreed to abolish passport and visa control at their borders.

But Ireland isn’t a part of Schengen, and Anderson says that part of his trip is still on.

A change.org petition was started to get his trip canceled.

“Steven Anderson is a Holocaust-denier, Islamophobe and anti-LGBT+ extremist who is scheduled to preach in Dublin, Ireland on May 26, 2019, possibly in an attempt to get people to change their minds on last year’s abortion referendum,” the petition says.

“This petition is for the people to show that they want Pastor Steven Anderson banned from entering the Republic of Ireland.”

The petition has over 12,000 signatures so far.

Anderson founded the Faithful Word Baptist Church in 2005, an organization that is classified as a hate group by the SPLC. The Arizona pastor has already been banned from Jamaica, South Africa, the UK, and Canada; he was arrested and deported while in Botswana in 2016.