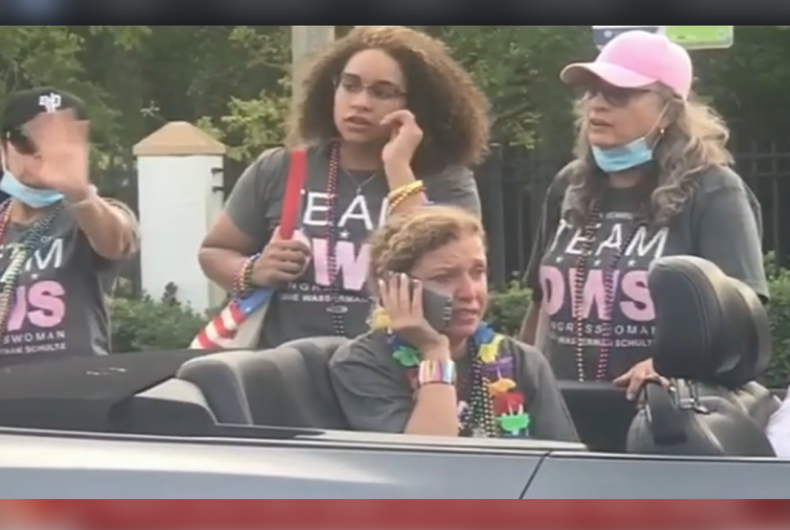 Rep. Debbie Wasserman Schultz (D-FL) on the phone after the incident at the Pride celebration.Photo: Screenshot/Twitter

Update: Justin Knight, the President of the Fort Lauderdale’s Gay Men’s Chorus, confirmed via email to media reporters that the driver was “part of the Chorus family,” as well as the victims. He did not name them, but added, “To my knowledge, this was not an attack on the LGBTQ community.”

While some witnesses described this as a possible intentional act, authorities have not. Detective Ali Adamson said an investigation is exploring all possibilities. The FBI is taking part according to reports.

Rep. Debbie Wasserman Schultz has also confirmed that she is safe, but that she is “deeply shaken and devastated.” This story is ongoing and will continue to be updated.

A man has left at least three people injured after he drove his pickup truck into a crowd at a Pride celebration in Wilton Manors, Florida, on the evening of June 18. At least one of those injured in the apparent accident has died.

They were not harmed physically, but Wasserman Schultz was among many left emotionally shaken from witnessing what many initially believed was a deliberate act. She was reportedly feet away from the truck when it came railing into the crowd.

The incident took place right at the beginning of a twilight parade recognizing Pride in the Wilton Manors community just north of Fort Lauderdale, which was starting after 7:00 pm.

According to WSVN, a white pickup truck was amongst vehicles lined up to take part in the parade, and directly behind the vehicle that Rep. Wasserman Schultz was in. When it was the vehicle’s turn to move his vehicle in line and start the procession, the driver then drove into the crowd.

“A tragic incident occurred at today’s Stonewall event. Out of respect for everyone involved, the parade has been canceled and a thorough investigation is being conducted,” Wilton Manors mayor Scott Newton announced.

Local10 reporter Christian De La Rosa, who witnessed the incident, reported to his outlet that the driver was taken into custody. “He appears just fine… [and] not distraught,” he said in a live phone call.

“He appeared to be part of the parade,” he noted, “he was wearing a Pride shirt.”

Other witnesses said he appeared to be wearing a Fort Lauderdale Gay Men’s Chorus shirt and expressed that it was an accident.

Here’s our first look at the truck in that hit at least 2 people at the #Pride parade in @WiltonManorsCty. I’ve covered up the license plate in case this was a horrible accident. @WPLGLocal10 Per @jojoWPLG pic.twitter.com/uj4aBq0Hws

A separate incident took place in Show Low, Arizona where a driver ran over at least six cyclists and was then shot and wounded by police in a subsequent chase.

In April, Florida Gov. Ron DeSantis (R) signed into law House Bill 1, a bill he championed, which assigns civil immunity to anyone who drives a vehicle into protesters that are blocking a road during a “riot,” described as a “public disturbance” of two or more people.

The ACLU of Florida warned that the law could “shield violent counter-protesters from civil liability for killing a peaceful protester or demonstrator with their vehicle.”

Email just into our newsroom from the Fort Lauderdale Gay Men’s Chorus, saying the man in custody connected to the incident in #WiltonManors is one of their own pic.twitter.com/QXgr3v968E

Due to a tragic event, the Stonewall Pride Parade has been cancelled but the festival events will continue.
*THERE IS NO DANGER TO THE PUBLIC.* https://t.co/als3T0MG4m

A STATEMENT FROM MAYOR SCOTT NEWTON: "A tragic incident occurred at today's Stonewall event. Out of respect for everyone involved the parade has been cancelled and a thorough investigation is being conducted."

I am deeply shaken and devastated that a life was lost and others seriously injured at tonight’s @WiltonManorsCty Stonewall #Pride Parade. My staff, volunteers and I are thankfully safe.

We’re praying for the victims and their loved ones as law enforcement investigates, and I am providing them with whatever assistance I can. I am so heartbroken by what took place at this celebration. May the memory of the life lost be for a blessing.

Devastated by the horror we saw at Wilton Manors Pride.

Mourning life taken & praying for injured & families of both.

Intensely grateful for police who sprung to action before us to save lives.

I’m at the @WiltonManorsCty Stonewall #Pride Parade — a truck just drove into the crowd. The driver is in police custody.

I’m lucky to be safe, but at least two people were hit and are in critical condition.

All of us here all praying for them and their families.

Photos from the scene where a truck drove into a crowd taking part in The Stonewall Pride Parade and Street Festival in Wilton Manors. Rep. Wasserman Schultz is seen reacting to the incident. @SunSentinel pic.twitter.com/UAIaa7yRTe

Don’t just sing for Juneteenth. Commit to ending the racism that made it necessary.