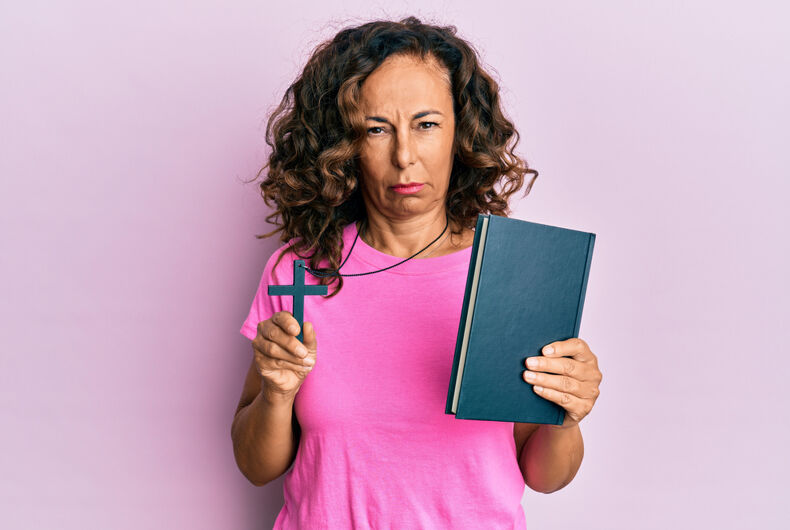 If you listened to the opponents of the Equality Act, you’d think that all of Christianity is united against the measure as an existential threat to the faith.

The Equality Act “viciously attacks Christians,” The Federalist proclaimed. “The Equality Act is anti-Christian,” Bill Donohue, the president of the Catholic League for Religious and Civil Rights, stated flatly. The bill will be “used by activists in and out of government to harass and punish Christians,” the hate group Family Research Council argued.

Related: 70% of voters support the Equality Act even as Senate Republicans try to stop it

The media certainly plays along with these arguments, highlighting Christian opposition to the measure as a reason why it’ll be difficult to pass. All of which proves, yet again, that the loudest Christians are the only ones who count.

In fact, the Equality Act has significant support from mainstream Protestant denominations—aka Christians. Among them are the U.S. Episcopal Church and the Evangelical Lutheran Church in America. All told, more than 100 faith groups have endorsed the bill.

You’d never know that from the controversy around the measure. Opponents of the bill as currently written, such as Sen. Susan Collins and Sen Mitt Romney, point to the lack of religious liberty exemptions in the measure.

As a reminder, the Equality Act would add LGBTQ people to other federally protected categories, such as race. There are no loopholes for discrimination built into the protections for those groups. You can’t refuse to rent to a mixed-race heterosexual couple because you object to marriage between the races.  But with the exemptions sought by opponents, you could refuse to rent to a same-sex couple because you object to same-sex marriage.

The bigger issue is that the media’s weak understanding of the diversity of religious faith in America leads the public to think that all Christians in general are lined up in unity against the Equality Act. The fact is, the Christians opposing the Equality Act are a particular segment of the faith community, and a shrinking segment at that.

Moreover, adding religious exemptions will never placate these opponents. If you listen to the religious right’s arguments against the Equality Act, they’re frequently not about religion at all. They’re about forcing second-graders to choose a gender identity and young women being sexually threatened by faux trans athletes.

These kind of hysterical arguments are one reason why more and more Americans are identifying as non-religious. The bargain the religious right struck with Trump has tarnished its credibility even more, as non-members see morality gleefully discarded for the sake of a personality cult and short-term political gains.

Meanwhile, there is an active religious left that sees equality as a religious value, not a threat. Pete Buttigieg’s presidential campaign brought this issue to the fore, but it’s been lost again to the old tropes.